Kenzie Macallan will be awarding All-New Fire 7 Tablet with Alexa (US ONLY) to a randomly drawn winner via rafflecopter during the tour. How freaking cool is that? Want more chances to win? Then follow the tour. You can do that here: http://goddessfishpromotions.blogspot.com/2017/12/vbt-edges-by-kenzie-macallan.html

Leigha Luccenzo is a strong, confident woman who has her life perfectly under control. But her nightmares have returned 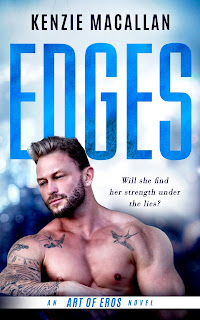 after a long absence. They are kept hidden from everyone. She comes home to find her apartment in shambles, the possible doing of her ex-lover Sydney. Layers of lies start to peel away. Her world begins to shift and unravel.

Dean is a hard edge man who has an appetite for beautiful women, fast bikes, and shattered souls. His secrets bind him, keeping him from any real relationship. They latch onto him from his past like locked chains. He sees behind Leigha’s armor. Convincing her he can help becomes his mission. He hopes she’s strong enough to handle what lies beneath, unlocking his guilt.

Through events out of her control, Leigha’s forced to face her demons.

As other people’s secrets get entangled in her own, she struggles to get to the meaning of her nightmare. Can Dean help her uncover her truth?

He put his hands down slowly, saying Leigha was out of her element. This isn’t what she could deal with right now.

“I think we need to slow down. There’s a lot going on.” The crack in her voice exposed her nerves. Her fingers twisted together.

He pushed his chair back and walked toward her in nothing but jeans and bare feet. He scooted her back from the table and knelt in front of her. He pushed her robe to the side, exposing her long legs. She leaned back and gripped the arms of the chair.

“I’ve lost too much and I’m not willing to lose any more. Life burned a hole in me and you filled it. You understand and listen to me without judgment. We have something I’m holding on to. I’ve never felt this way. Not even…” He swallowed his words, bowing his head. His fingers gripped onto her thighs.

She sat there stick-straight like a cornered animal with nowhere to go. His words struck her. She tried to hold onto her little bit of control. The only words missing from his speech were ‘I love you.’ She was thankful they weren’t said. She would be the one to decide what they became, but she couldn’t deny the hold he had on her.

His head came up as his eyes locked onto her. “I know you’re scared. I can see it in your eyes. I’ll give you time. Just meet me halfway.”

He got up and held out his hand. Without a word, she took his strong hand as the tether strengthened.

Now how about an Interview with the Author!

Funny- I have a wicked sense of humor and can find humor in just about anything. I believe that humor can help us deal with a lot of difficult situations. They say that laughter relieves stress and believe it can also heal. I know I always feel better after I laugh. There’s nothing better than a good belly laugh.

Smart- By smart I mean I try to make the right decisions for the situation. I do a lot of research on many different things and then make a decision. I’ve been asked to take the test for Mensa and other IQ tests but I’m not interested in being a number. I think there are many areas of intelligence. Howard Gardener developed the Multiple Intelligence scale and came up with seven areas of intelligence. Many have to do with performance, motor skills, and creativity. This makes more sense in our society overall. I know people who have physical abilities far beyond what I could ever do.

Creative- I have a very creative side to me. My mom signed me up for art classes at a young age and I have always made room for that in my life. I started out by taking photos of flowers. As an adult, I took oil painting classes to learn how to paint portraits. I spent time painting portraits in oil of mostly children. I also took a class or two in pottery but never learned how to sculpt. Now my interest has turned to writing. I’m passionate about it.

My dream team would be Chris Hemsworth and Blake Lively. I don’t think they have done a movie together but I would love to see it. I think Chris has the strength yet kindness to him. He could play my lead character Dean. He can be a little tough too. Blake has the ability to be very strong yet she’s naturally beautiful. She would make a great Leigha in Edges.

3. What’s your favorite love scene from a movie?

I’m a huge Gerard Butler fan. I love the movie P.S. I Love You. There are so many intimate and some funny love scenes in this movie. There is a moment when he kisses her on the road that is just really sweet. There was something about the two characters that all the small moments led to this great love affair. For me it’s not about the big sex scene, it’s about all the moments that tell us about the characters and what they are feeling.
4. What’s your wildest fantasy?

My wildest fantasy is to move to Australia with my family and never come back. I’ve always been fascinated by Australia and the culture. I hear the weather is nice too. It’s a fantasy because the reality is it’s very expensive to live there and I would be leaving everything behind. I know what you’re thinking; why not move to Florida? Florida doesn’t hold the appeal that Australia does. I think Australia is less humid.

I would prefer not to loose any of my senses because they’re all so vital to creativity. But I would prefer to loose my hearing. I’m already noise sensitive and the world has become a very noisy place. I can’t go to the movies without wearing earplugs. The thing that I would miss the most is music. I love all kinds of music and that would take some getting used to.
6. What is the naughtiest thing you did as a kid?

When I was seven, I packed a bag and ran away from home. Before you gasp, just know that my mom helped me pack this huge suitcase. It was close to evening time. She let me walk down to the end of the street with suitcase in tow. I got to the end of the street and decided it was getting too dark, turned around and came home. Needless to say, I never tried to run away from home again. We still laugh about it to this day.

Now for the Quickies - fast and fun!

Boxers or Briefs? Briefs. They’re just really sexy.
Top or Bottom? Top then bottom. I like variety.
Pajamas or nude? Nude, of course!
Hairy chests or smooth? I like both. I have to say that I like a little chest hair not a lot. Chewbacca is not my thing!
Alpha or Beta? Alpha. I tend to be an alpha female. I don’t think a beta could handle me. My husband is an alpha and he’s says I’m hard to handle! He’s claims I’m very driven. Maybe.

Kenzie lives with her husband in New England. She has been fortunate enough to travel all over the world to places like Africa, Greece, Switzerland, Holland, France, England and, of course, Scotland. Edinburgh is one of her favorite places. Creativity seems to be part of her soul as she paints portraits, takes photographs, and bakes. They have all added to her overactive imagination especially writing about strong women and alpha men. She looks forward to adding to her adventures and yours through secrets, strength, and passion.

Thznks for having me today. I enjoyed doing the interview.