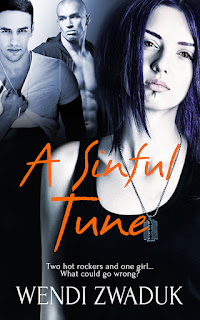 Two hot rockers and one girl…what could go wrong?

Robbie thought when he formed his band he’d get the girls, the gigs and the money. He’s got the gigs, but the money is a little slower in coming. He’s also got more than a few secrets. He wants the band to succeed, but even more, he wants to find the one woman who can accept him—warts and all, but also with his best friend Dillon involved.

Dillon loves Robbie like a brother. Robbie’s his other half in the music world. He handles the words while Robbie writes the music for the band. But all the music in the world isn’t enough if they don’t have their perfect third—Jess. She hits all the right notes for him and Robbie. The only issue? She may not accept their love in return.

Jess has followed the band for years and worked her way up to selling their merchandise. She knows their music almost as well as they do, but doubts they’d want to be with her. She’s so unlike the other women they’ve had—she’s short, curvy and a purple-haired Goth. When Robbie and Dillon hang out with her after one of the gigs, she has a choice to make. Either head home and wonder or let go of her fears and give the two men of her dreams the chance to make her fantasies come to life.

Publisher's Note: This book has previously been released as part of the Three's a Charm anthology with Totally Bound Publishing.

©Wendi Zwaduk, 2017 All Rights Reserved
“What if we asked her out? We’ve been dancing around it forever. You want her. I do. She likes hanging out with us and she never shies away when we kiss her.” He met Robbie’s gaze. “I’m serious. What if we were the ones who took the first step?”
“And say what?” Robbie frowned. “I like her and would love to snag her between us, but what do we say? ‘Hey, babe. We’ve chosen you. How about it? Do you want to be with us?’ She’d laugh and walk out. What about saying she’d be better off with us on either side? She’d think we were going to use her. She deserves better than a couple of rock and roll wannabes.”
“Well, yeah.” Dillon snorted. “If we approach her like that, then I’d be shocked if she didn’t run away. Finesse would be good.” He rested his arm on Robbie’s shoulder. “Think about it. She’s got that Goth, funky but beautiful look to her. She’s never balked at our behavior, either. She’s a little rough, but dependable.”
“She’s a good worker, sure, but you make her sound like a set of tires.” Robbie shrugged. “I’d love to ask her out, but I’m afraid she’d turn me down. You know me and my life. I’m no good for her. Besides, if she said yes, then how can I be sure she’d consider both of us? I’m not in the mood to put myself out there only to be turned down again. I’d rather be alone.”
“We won’t know until we try.” Dillon hadn’t realized how deep Elaine’s leaving had messed with Robbie until that moment. He hadn’t thought Robbie and Elaine were going to go the distance, but he hadn’t expected her to be so rotten. He’d never heard Robbie mention being happier alone. Robbie was a relationship kind of guy. Then again, so was he. Hell, for all he knew, she could be the one. A vision of her snuggled up between them came to mind. He longed to run his fingers through her purple hair and kiss her breathless. Tingles surged through his body—the thrill of playing music mixed with his desire for Jess. Oh, shit. He only felt that way when he picked up his guitar. Yeah, it was time to speak up.
“Then why don’t we talk to her and try to figure this out…after we play music?”

Posted by Wendi Zwaduk and Megan Slayer at 8:32 AM