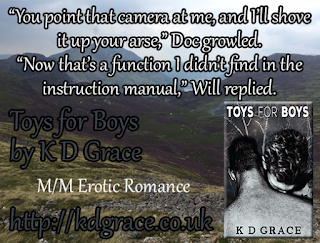 When I wrote Toys for Boys, I had already been playing around with placing myself in the story as writer, as scribe. Because I’d walked the Wainwright Coast to Coast, and because I remembered those days when all I wanted at the end of the day was to be warm and dry and asleep in my bed, I already had common ground with Doc and Will and their trials. Writers are always voyeurs to some extent. Certainly we’re always people watchers. And quite often we feel like we’re doing little more than reporting our characters’ stories as they whisper them in our ear. When that happens, it’s always amazing, the unexpected directions a story can take.

I wanted to bring that experience of the characters telling their story to the forefront of Toys for Boys and make it a literal part of the story – sort of share with the reader what we writers experience with our characters on a daily basis. I was very lucky because Will and Doc were more than happy to share. 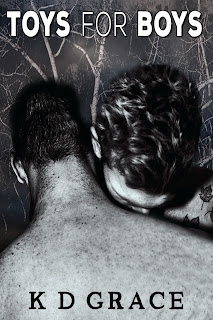 walk across England reviewing outdoor gift suggestions for the Christmas edition of Toys for Boys—an online magazine dedicated to the latest gadgets to tickle a man’s fancy. Will is recording their adventures with the latest smart phone technology. Doc is reviewing the latest outdoor gear. The two quickly discover the great outdoors provides even better toys for boys, toys best shared al fresco, toys that, in spite of Will’s great camera work, will never be reviewed in Toys for Boys.

Note: Toys for Boys has been previously published as part of the Brit Boys: With Toys boxed set.

When she’s not writing, K D is veg gardening. When she’s not gardening, she’s walking. She walks her stories, and she’s serious about it. She and her husband have walked Coast to Coast across England, along with several other long-distance routes. For her, inspiration is directly proportionate to how quickly she wears out a pair of walking boots. She loves mythology. She enjoys spending time in the gym – right now she’s having a mad affair with a pair of kettle bells. She loves to read, watch birds and do anything that gets her outdoors.