Out now from Amy J Hawthorn!! 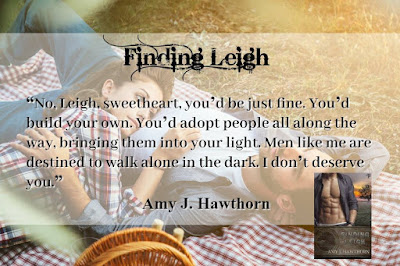 A ghost emerges from Rick’s past, kidnapping the woman he loves and the leader of Dark Horse Inc. will stop at nothing to get her back.

Leigh Ann MacDonald values love and loyalty above all else. When Rick denies their attraction, he deals a callous blow to her tender heart, but their search for the little girl with no home brings them back together. Their passion grows, but when frustration mounts, can their love survive a race against time? Terror, multiplying obstacles, and a search for a missing girl—it’s time to call in Dark Horse Inc.

It wasn’t the first time she’d noticed that his upper body strength hadn’t suffered the least bit. His broad shoulders and flat abdomen filled out his tees to perfection.
With Tallahassee at her back, he’d boxed her in close enough to feel his body heat. His breath brushed softly across her cheek. Air charged with heat and long denied desire whispered over her.
Sweat beaded at his temple. He licked his lips, and forget keeping track of their conversation. She couldn't remember her own name.
He spoke in the quiet rumbling way she loved. “What did you do?”
She blinked. “Do what? When?” Where? How? Who? Thankfully, breathing was an automated function, otherwise she’d be blue in the face. She shifted her focus from the temptation of his mouth, meeting his gaze with hers only to sink into the depths of his dark as night eyes.
Liquid need pulsed through her.
“In school. What could you have done that branded you a troublemaker for years?” One hand squeezed her hip and the other tucked a stray lock of hair behind her ear. A cool breeze whispered through the barn. Horses shifted in the background, content in their stalls.
She blinked and took a breath. Then another. A single finger flirted with the skin just about her jeans. Her breath hitched somewhere between her sternum and her heart.
She swallowed. “Which time?”
He quirked a half-smile and shook his head once. “Why am I not surprised? Pick the one you got into the most trouble for.” He reached out as if to teasingly tug her hair. His features softened and desire glittered in his eyes. His hand slowed and caressed down the length of her hair, all traces of play gone.
She matched his grin with one of her own. “I got suspended for pranking the high school’s basketball star. I went to the thrift store and bought an enormous pair of granny-panties. Later, I attached them to his car antenna with superglue, like a flag.”
“Why in the world would you do that?” His head shot back a few inches and his eyes widened.
“He was picking on one of the girls from the trailer park, saying really nasty things to her.”
“And you stood up for her when no one else would.” His face softened as he looked down on her.”
“He was quiet, so none of the teachers heard the nasty things he said to her. Melissa, the girl I stood up for, was so embarrassed, she wouldn’t say anything at all.”
“It’s no wonder you became a social worker. It’s in your blood.”
“It is. It’s hard, sometimes heart wrenching, but I miss it even now. There’s not any way I can get back to work until after he’s caught, is there?”
“No. I’m sorry, there’s not. I won’t allow it.” Regret softened his voice.
“I’m trying to behave, really, but I don’t know how much longer I can bear it.”
He tilted his head in confusion. “Behave? How are you supposed to behave while you’re here?”
“I’m trying to give you space, letting you do what you do best without interference. Part of me wants to be underfoot, asking a million questions about what you’ve found and what your plans are. I would only be a hindrance. If I could go to work, even for just a few hours a week, I think it was ease my restlessness. I don’t do well with boredom.”
“Give me a little more time and we’ll get him. Hang in there, okay?” He kissed her briefly, sweetly then pulled back.
“Okay.” She dropped her forehead to his chest and sighed. What else could she do? She looked up and met his dark gaze. “I trust you.”
A flash of something dark and potent flickered in his eyes. He seemed hurt, torn.
Pulled closer as if by some invisible force, her body brushed his. The heat of his palm pressed flat against the bare skin of her lower back holding her in place. The other returned to her waist.
Blissfully helpless, she waited, star struck as his mouth descended. Firm, full, silken lips brushed hers. She parted, thirsting for his taste, so hungry for any morsel he’d give.
Tangling her fingers in the material of his shirt, she held on and succumbed. He groaned, the sound a delicious rumble. Thinking she’d won, that he’d finally surrendered to the unbreakable pull that bound them, she smiled beneath his mouth.
His kiss was everything she’d dreamed of and more. Desire, fiery and fierce burned through her, all-consuming. His tongue met hers, seducing and claiming. He pulled away, only to return for more. They crashed together in a passion fueled maelstrom.
His hand swept up under her shirt, across the bare expanse of desire sensitized flesh, then pressed her front flat against his, crushing her against him in the most delicious way. Dizzy with need, her every cell seemed to reach for his with a desperate ache.
Tallahassee shifted behind her and brushed against her back. Rick pulled out of the kiss, rested his forehead against hers. He closed his eyes. Starved for air, their chests rose and fell in a matched rhythm.
Then without a word, he walked away.
In a not-so-subtle hint for attention, Tallahassee nudged her shoulder. She turned and reached for the reins. She run a hand along the horse’s neck. Pressing her cheek to Tallahassee’s side she closed her eyes to shut out the heartbreaking view. She might be a strong, independent woman, but that didn’t make it hurt any less when she watched the man she loved walk away.