Hank’s Justice
Contemporary Romance
~ ~ ~
Want to win something cool? There's a $10 Amazon GC up for grabs!! Check it out and fill out the Rafflecopter at the end of the post! Grab your copy today!

Hank's Justice by AM Griffin 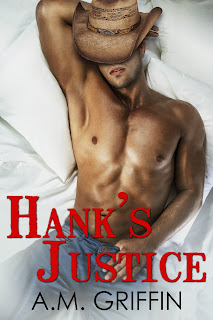 Justice needs to start afresh someplace her abusive ex can’t find or hurt her and her son anymore. Just her luck to be stranded in Scenic Falls, Montana where, instead of being faceless people in the big city, they stick out like sore thumbs. Being so conspicuous and drawing everyone’s attention, especially that of hot cattle rancher, Hank, means they can’t stay. No matter how much it feels like home.
Hank was born, raised, and plans to die in Scenic Falls. What he doesn’t need is to obsess over the city woman who’s come to town and no doubt would soon move on. Then Justice becomes his live-in cook and bookkeeper and, despite knowing she has secrets she won’t share, Hank realizes he’ll do anything to make her stay in the small town, and with him. That is, until Justice’s past comes calling, threatening everything.
Including their lives.

“This life isn’t for everyone. The hours are long and sometimes feel never-ending.” She handed a plastic spatula to TJ and they began scooping chocolate frosting from a large bowl to coat the cake. “You’ll be paid salary because hourly just isn’t possible. You’ll be expected to have breakfast cooked by five-thirty every morning except Sundays. The field hands might not come for breakfast but be sure to expect them for lunch. That’ll be two extra mouths to feed. There’s also dinner to be made and, in-between the meals, the house needs to be kept up, laundry done and, of course, balancing the books and making sure all the bills are paid and invoices sent out.”
What the hell am I getting myself into?
“I know it sounds like a lot,” Ruth continued. “But it’s not anything more than what the average mother does on a daily basis. Room and board are free. No bills to pay here. You’ll get a cell phone and a salary. As long as the food is cooked, chores done and books are balanced your time is yours to do with as you please.” Ruth pulled her lips to the side and looked up at the ceiling as if trying to remember something else. Then, seeming to give up, she said, “I guess that’s all. Are you ready for a tour of the house?”
“Um, sure.”
Ruth showed them the main floor, which consisted of a living room, formal dining room, bathroom, office, laundry room and master bedroom. In the bedroom, clothes were thrown about. Dresser drawers hung open with items spilling from them. A large unmade bed occupied one side and a door leading to a private bathroom was on the other.
“This is my son’s room. I want to say that you wouldn’t have to come in here and clean but, as you can see, he could use the help.”
The cat that she’d seen earlier was now sprawled out on the bed, stretched across one of the pillows.
Justice imagined a teenage boy who would rather play video games than clean his room. “I’ll get on him about it,” she promised.
Ruth smiled at that. “Just what I wanted to hear. When his mother tells him to clean his room it falls on deaf ears. But if a pretty woman like you says something…well, I think he’ll be more apt to pay attention.”
“What’s the cat’s name?” TJ asked.
“Sugar Bear.”
At hearing his name the cat got up and walked over to them, going straight to TJ begging to be picked up. TJ obliged.
Ruth led them up some back stairs to the second story, where there were three additional rooms. One was a master bedroom with a walk-in closet and a private bathroom. It was so large that it had views from three sides of the house. The other two rooms were about the same size as each other and both opened to a shared bathroom.
“You can take the master bedroom since Hank likes his room on the main floor.”
Hank. Where had she remembered that name from?
She followed Ruth as she led them down the front stairs and back to the kitchen. “When will I know if I have the job?” Justice asked as the name tugged at the back of her mind.
“Right now. I hope you’ll take it.”
Justice beamed. “Yes. Yes, I’ll take it.” She gathered Ruth’s hand in hers and shook it like a fool. “I won’t let you down. I promise.”
“Oh, honey you aren’t coming to work for me. You’ll be working for my son.”
The smile Justice wore turned into confusion. She dropped Ruth’s hand. “I-I don’t understand.”
The front door opened and heavy boots thumped against the wood floors. As if in slow motion the man who had caught her eyes appeared at the kitchen door. “Ma, did I miss…” his eyes settled on her, “the interview?”

About the Author
A. M. Griffin is a wife who rarely cooks, mother of three, dog owner (and sometimes dog owned), a daughter, sister, aunt

and friend. She’s a hard worker whose two favorite outlets are reading and writing. She enjoys reading everything from mystery novels to historical romances and of course fantasy romance. She is a believer in the unbelievable, open to all possibilities from mermaids in our oceans and seas, angels in the skies and intelligent life forms in distant galaxies.