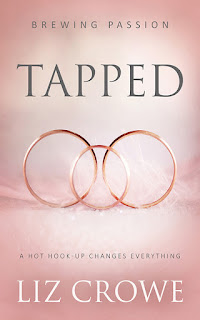 destined to clash, until a hot hookup in a cold beer cooler changes everything.

For Austin, it's a life-altering moment that sets him on a path away from his birthright, while Evelyn must face her fears about committing to a man considered the playboy of the micro-brewing world.

Sensing the heat of Evelyn’s fury as he finalized another large order, he excused himself and made his way toward the restroom. The tuning-fork sensation had morphed into a dull ache centered in his gut, which steadily made its way down to his balls.
When he emerged—after splashing water on his face enough times to calm the hardening in his jeans—he almost plowed straight into her. He gripped her arms to keep her from falling and the impulses that had bounced around in his brain since the morning nearly brought him to his knees. He dropped his hands and looked away, swallowing back the urge to say something, anything, to convince her he wasn’t such a bad guy.
“Sorry.”
Her voice was flat. He took a step back, stopped only when his butt hit the wall. The space between them filled with near-visible silence, but he didn’t move.
“I don’t know how I’m doing it, but the longer we work together, the more sales I make, and the more you hate me. Clue me in here, Benedict. I thought sales were the goal of the day.” He crossed his arms, holding them close to his chest so she couldn’t gauge how shaky his hands had gotten.
She swallowed, and he watched the exquisite warm peach hue of her skin redden. Admiring the line of her neck, her jaw, the plump fullness of her lower lip as she bit it, a nervous tic he’d love to come to love, if she’d let him, Austin sensed himself falling deeper into a very scary hole. Her ongoing silence took on a life of its own.
“Well? I left my secret-sales-goal decoder ring at home. You obviously have a different agenda for today. I get it. ‘Prove to the rich boy he doesn’t have what it takes’ is fine, but we could have saved some time if you’d just told me first.”
She opened her lips, then pressed them together and shouldered past him. He watched, fascinated, as his hand reached out of its own accord and snagged her arm. She stopped, stared at it, then up at him. When he realized the blue of her eyes was brighter because of tears, he hesitated. Female tears always unnerved him, but his chest tightened in a thoroughly alarming way at the thought of having caused her unhappiness.
He let go. “Sorry. I didn’t mean to…”
In a split second, her beautiful face was within inches of his. “Don’t flatter yourself. I’m just pissed off. You’ve had that effect on me since I first laid eyes on you, so yeah, I guess I set you up. But apparently, all your country-club, private-school time has been worth it. Bullshitting comes naturally to you. And that’s all this job is. A whole barrel of bullshit.”
She stomped away before he could speak or, even better, grab her and kiss her. The space she vacated quivered with anger. But her crisp perfume stayed in his nose and he had to clench his hands into fists to keep from shoving her up against the wall and kissing her until she saw it his way.

**************
Amazon best-selling author, mom of three, Realtor, beer blogger, brewery marketing expert, and soccer fan, Liz Crowe is a Kentucky native and graduate of the University of Louisville currently living in Ann Arbor. She has decades of experience in sales and fund raising, plus an eight-year stint as a three-continent, ex-pat trailing spouse.
Her early forays into the publishing world led to a groundbreaking fiction subgenre, “Romance: Worth the Risk,” which has gained thousands of fans and followers interested less in the “HEA” and more in the “WHA” (“What Happens After?”).
With stories set in the not-so-common worlds of breweries, on the soccer pitch, in successful real estate offices and at times in exotic locales like Istanbul, Turkey, her books are unique and told with a fresh voice. The Liz Crowe backlist has something for any reader seeking complex storylines with humor and complete casts of characters that will delight, frustrate and linger in the imagination long after the book is finished.
Don’t ever ask her for anything “like a Budweiser” or risk bodily injury.

Recommendations/endorsements:
“If you want a story that will grip your heart and bring all your emotions into play, then do not miss a Liz Crowe story.
Liz Crowe has an uncanny ability to reach into the heart and soul of her characters and make her stories come to life in gritty realism that hits all the emotions.
Liz Crowe is one of those rare authors who knows how to take the emotions of her characters and make them real for her readers, binding you to the story.”
---International Best Selling Author Desiree Holt

"Liz Crowe is my drug of choice for unconventional romance that pushes the envelope of my comfort zone."
--Best Selling Author of the Enigma Series, Ditter Kellan

Liz Crowe writes intense true-to-life stories that make you feel. Whether it's anxiety, love, fear, hate, bliss, or loss woven into her plot lines, you will feel it deep down to your very soul.
--Audrey Carlan, #1 New York Times Bestselling Author