Book Blast ~ Where the Heart Is by Jennie Marsland

It's a book blast and the book featured today is Where the Heart Is by Jennie Marsland. Be sure to comment because there is a great prize up for grabs. Like? Jennie will be awarding a digital copy of Where the Heart Is to a randomly drawn winner via rafflecopter during the tour. How cool! Want more chances to win? Then follow the tour right here: http://goddessfishpromotions.blogspot.com/2016/08/book-blast-where-heart-is-by-jennie.html

Where the Heart Is
by Jennie Marsland

When Rochelle McShannon moves with her father from Morgan County, Georgia to the Yorkshire 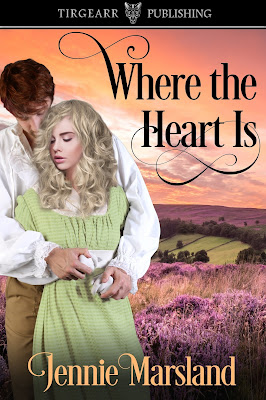 Dales, she thinks she’s leaving behind everything that matters to her. Her mother has passed away, her twin brother is going west to avoid the looming Civil War, and her family’s unpopular views on slavery and secession have destroyed her relationship with the man she hoped to marry. If returning to her father's childhood home eases his grief, Chelle asks for nothing more.

Martin Rainnie understands grief. Since the loss of his wife in childbirth, he’s known little else, except anger. He’s retreated to his farm and turned his back on the world, including his baby daughter, who’s being fostered by Chelle’s relatives. With little Leah drawing them together, Martin begins to wonder if he can love again – and convince Chelle to do the same.

But the war overseas has far-reaching consequences, even in a small English village. Can Martin and Chelle overcome danger, loss, and bitterness to make a home where the heart is?

A few stray notes from Martin’s fiddle drifted from the open window. He played the first few bars of a tune, stopped awkwardly and began again, feeling his way through the waltz as if he hadn’t played it in a long time. Then he played it again with more assurance. The lilting melody rang out, warm and full of expression, until Chelle felt like getting up and dancing. Jessie was right. The man had a gift.

He slid from the waltz into an arrogant march that he played with a hint of a bounce, as if he were making sly fun of the tune’s seriousness. Chelle closed her eyes and smiled. Martin followed the march with a haunting air that sent her soaring over the dales in her imagination, looking down at their windswept emptiness.

One tune blended into the next until twilight faded and the stars came out. When Martin stopped playing, Chelle came back to earth with a jolt. How long had she been sitting there?

The house behind her was dark and silent. Jessie must have turned out the lamp and gone to bed. Through the open door, she heard Martin put away his fiddle and come to stand in the doorway. Then she felt his presence behind her. His voice touched her ear as he sat next to her. “You’d best come in, lass. It’s gettin’ late.” 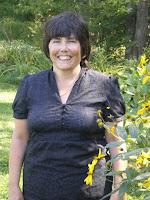 had a lifelong love affair with words and history, starting with her family’s stories of life in Nova Scotia in earlier times. Jennie teaches English, science and history at a local private school, and when she isn’t writing, spends her free time cooking, gardening, playing guitar, and catering to the whims of her two very spoiled Nova Scotia Duck Tolling Retrievers.

Where you can find Jennie:

Glad to be here! I'm working today, but will drop by later this afternoon to reply to comments.