Cover Reveal ~ A Duchess in Name by Amanda Weaver

It's a Cover Reveal featuring A Duchess in Name by Amanda Weaver. There are prizes involved! What? You could win a $20 Amazon or B/N GC to a randomly drawn winner via rafflecopter during the tour.
All you have to do is comment! Very cool. Want more chances to win? Follow the tour here: http://goddessfishpromotions.blogspot.com/2015/10/book-blast-duchess-in-name-by-amanda.html

A Duchess in Name
by Amanda Weaver 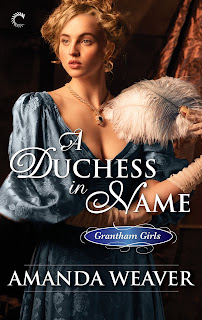 Victoria Carson never expected love. An American heiress and graduate of Lady Grantham's finishing
school, she's been groomed since birth to marry an English title--the grander the better. So when the man chosen for her, the forbidding Earl of Dunnley, seems to hate her on sight, she understands that it can't matter. Love can have no place in this arrangement.

Andrew Hargrave has little use for his title, and even less for his cold, disinterested parents. Determined to make his own way, he's devoted to his life in Italy, working as an archaeologist. Until the collapse of his family's fortune drags him back to England, to a marriage he never wanted and a woman he doesn't care to know.

Wild attraction is an unwanted complication for them both, though it forms the most fragile of bonds. Their marriage of convenience isn't so intolerable after all--but it may not be enough when the deception that bound them is finally revealed.

He held onto her hand for a beat too long, that delicious roughness of his palm heating hers. Her stomach erupted in butterflies. Utter romantic nonsense. It was a handshake. She glanced up at his face and their eyes met. The butterflies vanished and her stomach dropped clean to her feet. Her feet were rooted in place, but her body swayed slightly, as if being tugged toward him by an invisible thread. A muscle in his cheek twitched. Then, to her shock, he leaned in and kissed her cheek.

Her skin warmed beneath his lips and a delicious tingle shot down the back of her neck. It was only a moment, a brush of his lips against her cheek, but it heated her all the way down to the soles of her feet. Well, there was her answer about his touch. That tiny kiss was ricocheting through her body, laying waste to her good sense.

He drew back two scant inches, his eyes meeting hers in the dull gold glow of the gaslight wall sconces behind her. She could feel his breath on her mouth. There was only his beautiful, strong face and those shockingly blue eyes and his lips, which had made her feel so much at the slightest touch. She swayed toward him again. His eyelids lowered, his gaze dropping to her mouth.
~~~~~~~~~~~~~

Amanda has loved romance since she read that very first Kathleen E. Woodiwiss novel at 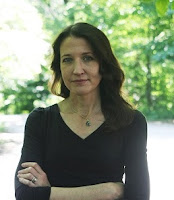 fifteen. After a long detour into a career as a costume designer in theatre, she’s found her way back to romance, this time as a writer.

A native Floridian, Amanda transplanted to New York City many years ago and now considers Brooklyn home, along with her husband, daughter, two cats, and nowhere near enough space.


B&N: http://tiny.cc/5zox4x
a Rafflecopter giveaway
Posted by Wendi Zwaduk and Megan Slayer at 12:00 AM