The Artist's Touch by Kerry Adrienne

Kerry Adrienne stopped by today and let me have a few moments with her hero from Artist's Touch. Check it out! Here's my interview with Kenon Alavi, master portrait artist:

How long have you been creating art?

Since I was born. My mother said I created a perfect portrait of the Virgin Mary with my fingers in my prune baby food.

What's your media of choice?

Oils. I love the way they blend, and the depth of color and sheen when they are dry is unparalleled.

Do you follow the muse or create what sells?

Before I met Wally, I painted what sold. And I did it better than anyone.

Favorite artist, living or dead, you'd like to have lunch with? 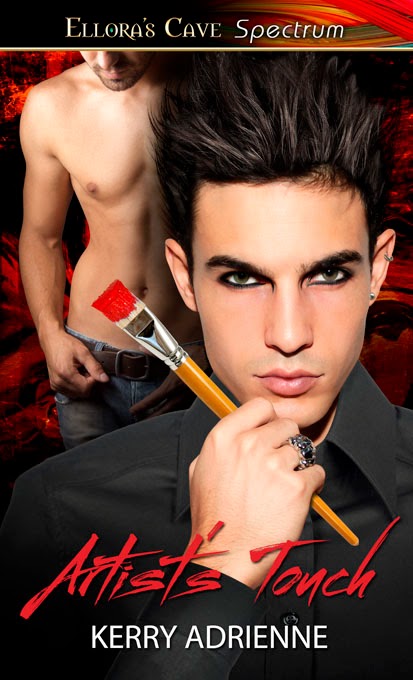 Every starlet wants master painter Kenon Alavi to do her portrait…and more. But Kenon prefers firm to soft and sates his desires with the boyfriends of the women he paints, enjoying the diversity of many lovers but shunning any attachments.

Wallace Harte’s English degree isn’t helping him find a job and working at a bar is the closest he’s gotten to being the Second Coming of Faulkner. Something’s gotta give soon or he’ll be out on the street.

Kenon zeroes in on the bartender at an art exhibition, intending to add him to his long list of conquests, but Wally bolts, initiating a heated game of cat and mouse. Kenon delights in the game until he discovers what Wally is writing. Feeling betrayed, Kenon swears off all entanglements until he reads Wally’s story and discovers true love is sometimes between the pages and not the sheets.

Inside Scoop: This book contains hot, sexy scenes of M/M interaction of an artistic nature. Who knew having your portrait painted could be so hot?

About the Author:
Kerry writes about love in its many forms, and enjoys exploring the dynamics of relationships and the quandaries people get themselves into. She lives in suburbia, but is making plans to escape to the ocean and NYC, as both places hold a piece of her heart.

You can purchase Artist’s Touch here:
Ellora's Cave
Posted by Wendi Zwaduk and Megan Slayer at 12:00 AM