Being Part of the Brit Babes by Lucy Felthouse

First, I want to say a huge thank you to Wendi for having me here today. It’s great to be here!

For just under a year now, I’ve been part of a group called The Brit Babes. We are eight British erotica and erotic romance authors that have clubbed together for several purposes. One, to promote all of us as a group, rather than just ourselves as individual authors. Two, to have a street team that reads, reviews and promotes all of our books. Three, to stand out from the crowd and establish a benchmark for quality. Four, because we’re good friends and it’s nice to have seven other women to rant with, exchange ideas with, ask favours of, and so on.

We’ve just added another purpose to our growing list. On Valentine’s Day, we released an anthology – Sexy Just Walked Into Town. It contains stories from each Brit Babe, as well as some collaborations and some tales from Babes which have more than one pen name. The book is available for free everywhere we’re allowed to make it free—i.e. pretty much everywhere but Amazon, where we’ve priced it as low as we’re allowed to. Fingers crossed Amazon will make it free when it realises it’s not the cheapest retailer! The idea is to give readers a taste of our work. They may have read some of The Brit Babes’ work and not others, or none of us at all. So it’s a low-risk way of readers checking out our writing, finding out if they like it and hopefully going on to check out our websites and other books.

So, what are you waiting for? Head over to All Romance eBooks and Smashwords to grab your FREE copy today. It’ll be rolling out to other retailers soon, just as soon as the information filters through from Smashwords. And hey, if you want to spend a little cash and get it on your Kindle, we won’t complain. Any proceeds we do make will go back into our street team, to providing them with goodies, prizes and so on. So it’s all for a good cause! 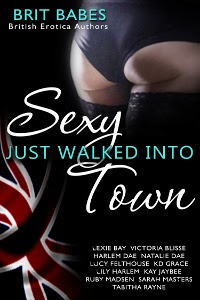 Ranging from sweetly vanilla to so-hot-it-will-blow-your-mind, the Brit Babes aim to please in every literary fantasy department. Their heroes are strong, determined and soul-achingly divine and their heroines sassy, sexy and not afraid to grab what they want. Passion and pleasure is the name of the game, romance and raunch a top priority and it all comes with a delightful sprinkle of kink.

With a whole host of awards, best-sellers and accolades between them, the Babes just know you’ll find something in this anthology that will keep you turning the pages and squirming on your seat. Then, if you like what you read here, check out the individual authors’ websites to investigate their collection of published works. Also visit the Brit Babes’ home on the web which acts as a library for the hundreds of books published by them. Tell your friends, spread the word, because one thing you can be sure of, is when the Brit Babes arrive, sexy has just walked into town!

*****
Excerpt from The Wrong End of the Stick by Lucy Felthouse:

Bonnie stifled a sigh. He was doing it again. Staring at her, as he had been every day that week. She was on a fortnight’s training course through work, the only one from her office who’d been sent. As a result, she knew no one and ended up sitting alone in the college’s cafeteria at lunchtimes. She’d had a couple of invites from kindly people also on her course, but she’d turned them down. It wasn’t that she was being rude or anti-social, she just hated people to see her eat. She was a big girl—that was putting it politely—and when people saw her have a meal, she could feel the judgement rolling off them in waves, the thoughts that she was fat because she ate so much.

It wasn’t true. About what she ate, that was. She was fat, and there was no denying it. But it certainly wasn’t her doing. She’d been born to large parents, and despite a healthy diet and plenty of exercise, she was still overweight. All she ever managed to shift was a pound or two here and there, and that was hardly noticeable, particularly on a woman her size. She kept at it, though, resigned to being a larger lady, but determined not to get any bigger.

Because she’d always been big, she was used to the snide comments, the dirty and derisive looks, the open stares. So it didn’t upset her any more, but she still got irritated when people simply gawped at her. Surely one glance was enough for them to ascertain that yes, she was a shapely girl, and then move on. In most cases it was, particularly if she glared at the person in question. But not with this guy. Bonnie was sure he was trying to be subtle, because he often averted his gaze as she trained hers on him. But even if he’d looked away, she could tell by the position of his head and body that he’d been peeking at her. Again.

Now, on day seven, she was almost at boiling point. What the hell was his problem? Had no one ever told him it was rude to stare? She was on the verge of doing just that.

Eating her lunch was an unpleasant task, knowing she was being observed. If she hadn’t been so damn hungry, she’d have left it. But she’d been running late that morning and had committed that mortal sin—missing breakfast. So her chicken salad—with no dressing—was absolutely necessary to avoid making herself feel ill, or passing out, so she devoured every last morsel. She ate faster than she normally would, not because she was being greedy, but because the sooner she finished eating, the sooner she’d stop feeling so damn self-conscious about the guy across the room watching her.

She decided to give him one last chance. When she’d finished her lunch, she’d drink her carton of apple juice, then sit for a few seconds, doing nothing. If he continued to look at her, she was going to stomp over there and give him what for. If he didn’t, then she’d carry on with life and do her best to forget about him and his rudeness.

Deep down, she knew she was going to have to go over and say something to him. After seven days, he wasn’t going to suddenly amend his habits. She was just being a bit of a wimp, really, hoping to find some way of getting out of confrontation, because she didn’t like it, not one bit, and it was absolutely a last resort. Unfortunately, she couldn’t think of a single other way of stopping him from doing it. Perhaps she could put up a sign in front of her saying “Please stop staring at me.” But if he couldn’t take the hint when she’d glared at him, he wouldn’t take any notice of a piece of paper.

Several minutes later, her salad was gone and she moved onto her drink. With a sinking feeling in her gut, she saw he was just as interested in her now as he had been when she’d been eating. Damn, confrontation it was then.

Draining the carton, she gathered her plate, cutlery and other rubbish onto her tray, stood up and slid it onto the rack nearest her. Then she returned to her table, grabbed her bag, pulled in a deep breath through her nostrils and marched over to the Peeping Tom. She slid out the chair opposite him and sat down on it.

“Can I help you?” she asked. Now she was close to him, she couldn’t help noticing that, annoying gawping habit aside, the guy was pretty cute. He had strawberry blond hair, pale skin, eyebrows and eyelashes to match, startling blue eyes and full red lips. Every time she’d seen him he’d been sitting at a table, so she had little clue about his height or physique, but his face was a damn good start. He looked about her age, too, mid-thirties. She chastised herself—she was meant to be telling him off, not lusting over him!

“W—what do you mean?” he replied, the blood draining from his face and making him even paler.

“I think you know, Mister. I’ve been attending this college on a training course for seven working days now, and on every single one of them, I’ve caught you staring at me at lunchtime. And you haven’t even been subtle about it, either. You’ve gawped openly and it’s doing my head in. Which is why I’ve come to find out exactly what your problem is, and to ask you to please pack it in.”

“Is it because I’m fat? Haven’t you ever seen a fat person before? If you haven’t, you’ve led a very sheltered life. And regardless of whether you have or not, hasn’t anyone ever told you that it’s rude to stare?” She was getting into her stride now—as much as she hated it, he’d driven her to this. She thought she’d kept the volume of her voice pretty low, but apparently not enough, because they were drawing stares from other tables nearby. But at least they had a valid reason to look—not many people could resist checking out an argument or a fight.

“F—fat?” The colour that had drained from his face came back, then heightened further and further until he began to resemble a tomato. He clutched the edge of the table so hard that his knuckles went white. “You’re not fat. Y—you’re beautiful.” He dropped his gaze to the table then, and remained resolutely silent until Bonnie spoke again, which was a good few seconds later, as what he’d said sunk in.

I'll second that! Great to have 7 other writers to rant with!! The Brit Babes is so much fun- I'm really lucky to be a part of it. Kay x

Wish I were part of the group! Sounds like a lot of fun. :-)

As one of the lucky readers that are part of the Brit Babes Street Team Wendi I can tell you that it is totally fun! Great ladies that are as supportive of us readers as they are each other as writers!