100 Sunday Snogs. How much better can you get? Here's mine from Candlelit Magic. Love this book. Hope you do, too. And if you answer the question at the end of the post, include your name and email, you're in the running for either a prize pack (US only) or a pdf from my backlist (INT). 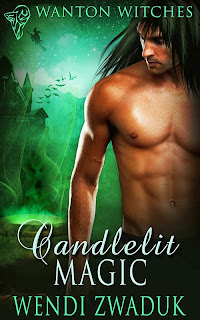 Total-E-Bound
Even love witches get the blues.
Havan’s magical potions bring couples together and give them the happily ever after of their dreams. Too bad her spells don’t work for her. In Erie View, the townspeople see nothing more than a witch. All she wants is to find that special man to embrace her quirks and love her. Will she be able to accept the blessings of the Goddesses or lose faith in herself?
Neil doesn’t believe in magic. It’s trickery for television and movies. No one creates a spell for people to fall in love. Hell, he doesn’t even believe in love. After a string of crappy dates and dead-end romances, he’s through with relationships. But a chance meeting at the grocery store changes his mind. Havan’s nothing like he expects—but is the blue haired witch enough to make him give romance another shot?

And now for that SNOG!!! Yay!
The witch stood beside the car, the light from the street lamp illuminating her hair. She didn’t look at him, but didn’t move. So tiny and lonely next to the big vehicle. His heart broke. He’d been an ass to her and he needed to make things up to her.
“Havan.” Neil stopped beside her. He tugged her into his arms and stroked her hair. She felt so good in his embrace, perfect. “I’m so sorry, Havan. I’m not even sure what I want to say, but I like you.” He kissed the top of her head and closed his eyes. Her various bracelets and earrings jangled like sweet music in his head. He could hold her forever. “I’m sorry I’m being too pushy and pressing too hard. I’m a thirty-five-year-old construction worker who knows shit about dating, but I’m willing to learn. Give me another chance?”
She smoothed one hand up his chest, resting her palm over his heart. “You’re a good man,” she whispered. “You’re trying too hard and crushing me.”
“Because I like you.” He cupped her jaw in one hand and swiped his thumb over her cheek. Her eyes shone with unshed tears and she licked her bottom lip. He liked her more than he understood.
Neil lowered his mouth to hers and tasted her. She moaned beneath him and gripped his jacket, but didn’t pull away. From his head to his toes, his body vibrated. His skin tingled and when he opened his eyes for just a moment, he could’ve sworn she glowed. Did witches glow when they were turned on? He closed his eyes and tangled his tongue with hers. Something powerful passed between them and he never wanted to let her go.
After less than one date and a chance meeting at the shop, he’d fallen more than a little in love with her. Bullshit. Love didn’t happen that fast. But something had changed. The potion? No, he hadn’t drunk it. Had she spoken magical words? He doubted she’d said anything like that. She didn’t seem to believe in herself enough to try something devious.
Still, he refused to deny his attraction to her. He wanted more dates with her and to explore every inch of her delectable body. Now he had to hope she wanted the same thing from him.

Havan melted into his arms. He made bad jokes, but lots of people insulated themselves with insults against what they didn’t understand. Having a witch in town certainly left her open to being the object of ridicule. But he seemed to be different. Neil, despite all his faults, seemed to care. She clutched the sides of his coat and sighed into his kiss. The fever came over her again and she held him tighter. Venus must’ve smiled down on her or predetermined that she belonged to Neil. Couldn’t have been the potion. Could it?
Havan pulled away from him and stared into Neil’s blue eyes. His cheeks were flushed and his lips parted. “Come home with me.”
She had longed to hear him say those words, but doubt crossed her mind. “Did you take the potion?”
“Nope.”

Put your answer, along with your name and email in the comments and you are entered to win! Good luck and thanks for stopping!

Check out the other snogs here!!
Posted by Wendi Zwaduk and Megan Slayer at 12:00 AM

thanks so much for sharing!!

Potion! This was a perfect excerpt with Halloween just around the corner.

Havan was worried he might have taken a potion.
catherinelee100 at gmail dot com

And the winner is...... Catherine Lee!! I'll be emailing you off list. Thanks to everyone who stopped by! :-) Much appreciated. Hope you found something you liked.