LORI FOSTER GET TOGETHER!

This weekend was a hoot. Not only did I get to sell my books, but I got to meet some awesome people, get some new books, but meet my BFF in PERSON.

I know I sound like a dork. But you all already know, I am.

I met Barbara Vey from Publishers Weekly while just strolling through the foyer. Talk about cool. She's very down to earth and easy to talk to. We had a great time until the conversation shark showed up, but still, Barbara, you rock! And thanks for putting me in your blog. That's a true honor.

Now you have to keep this in mind, I'm not normally a shy person, but I tend to blend in pretty well. It's a gift. So when I see people I know, they tend to look at me and have to think about how they might (or might not) know me. For one, I met my Secret Santa from Lori's Book Junky Loop. Joni is a doll. I love her. And she's a riot to talk to.

So when I spotted Anne Rainey and she wanted to sit at my table, yeah it was so cool. Then touching base with Jaime Saare was pretty darned awesome, too. I love her books. 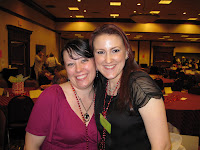 Now I've been told I tend to blend in. I was always the chubby friend of the hot girl. Hey, it's a gift as well. I still don't get how a size 6 is chubby, but whatever. So I try to put myself out there. I can be loud, I can be brash, but I try to stay tactful. Operative word there was TRY. :) So when I saw this on Google Alerts, I had to read it. Go to my dear friend Stacy's Place on Earth and read her comments about the RAGT. But to see she'd mentioned me as fun and fearless... I am humbled. Thanks, Stacy.

I met some other pals there and will mention them tomorrow, but I have to get to the nitty gritty for a sec. You may have read this far and said, gee, she met her BFF in person? Sounds odd. In some ways, it is. Why? Because we've talked for close to two years without SEEING each other in person. Triumphs, tragedy, we've been through it all and yes, she can end my sentences. 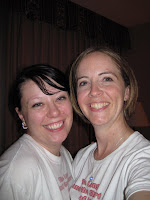 That's all for now, cuz I need something to write about tomorrow.

Toodles.
Posted by Wendi Zwaduk and Megan Slayer at 11:34 AM

It was such a blast meeting you and Chris!! I can't wait for next year. Loved the pictures.

It was a lot of fun, heck I think we should do it again next year! Hugs,

LOL, hijinks were had by all... okay, by us, but still. Love that we're now infamous and can't wait to do it again. And there is absolutely nothing wrong with just barely meeting your best friend in person. :-D