Okay, I really needed to vent.

I love animals. I really do. Cats are my favorite critters. (See my cat-shifter stories if you don't believe me.) 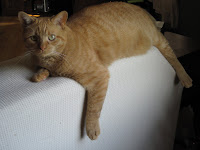 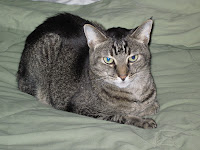 My cat Rusty (see the grey tiger picture) has a few issues.
Besides the fact that he's very high strung (like you couldn't tell that from the pic...), he's still sick. We took him to the vet starting three and a half months ago to figure out why he's not eating right, why he's leaving little messages on my furniture and not using the litter box. So, I got some great info from a close friend and started making him cat food. Yup, I'm getting close and personal with my food processor, fresh veggies, and sardines...

You'd think stinky fish would do it. You haven't met the ever headstrong Rusty.

So I'm doing my pre-Christmas cleaning and I find little messages he left under the Christmas tree!!!!

Now I'd like to think I'm an observant person, but you can't see what goes on at night if you're asleep. Still, the puddles under the tree that aren't from the tree stand... oy...

So, that's my venting. Rusty's pouting in the dog kennel for now. He's got a little box to go in and can't get out to puddle on things, so the tree should be safe for now.

As for the orange one, that's Kenny (so named after the NASCAR driver Kenny Wallace). If Garfield was real (well, if he lived in Ohio), then Kenny would be him. No kidding. He loves to sleep, eat, and sleep some more. And yes, he's known for sleeping in strange positions, like with one back leg draped over the couch. Don't ask me why.

Toodles. I need to get some other things done.
Posted by Wendi Zwaduk and Megan Slayer at 10:36 PM