Today I'm featuring His Untamable Wickedness by AP von K'Ory. You'll want to check it out. Looks steamy. Plus, there are prizes. Like? A P von K'Ory will be awarding a $15 Amazon or Barnes and Noble to a randomly drawn winner via rafflecopter during the tour. Want more chances to win? Then follow the tour. You can do that here: https://goddessfishpromotions.blogspot.com/2022/10/vbt-his-untameable-wickedness-by-p-von.html 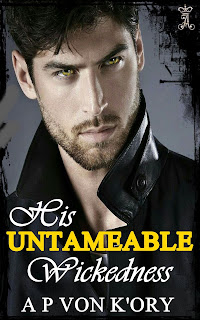 A three-letter word made me a murderess at the age of eight years. But having experienced the curses of that word, I was done with men as I grew up. All men. Except to outplay them in the New York financial arena. Then Crowned Sex enthroned in gorgeous velvet charm and lustful gallantry storms into my life. Spewing volcanic lava on my monumental arctic ice block. With the unapologetic fierceness of a savage god. Wearing crackling thunderbolts straight from the god Zeus. Explosive has nothing on it.

I scented her darkness from the moment I was told about her. The sight of her sealed my decision. She was the woman created for my own darkness. I set off to protect her even from herself. Protect her to claim.

Fuse her darkness with my own. For. Myself. I'd fended women off me with bazookas when I was done but they weren't. I wasn't prepared for the battle I soon fought. Not only with her but also with her family. And New York's billionaire gangsters who own entourages of corrupt cops and politicians. With every battle I won, she started new darker wars around me. You ate or you were eaten. Not even starving was an option.

He caught both her flying arms, used her momentum to spin her around onto her back on the couch and landed over her.

Smack bang between her legs.

Pinned her hands above her head and every f****** struggle she tried only forced her to rub against his hard body.

Furious, her thighs tensed but with nowhere to go except around his hips. He planned this. She f****** bet he planned this to the last minute detail.

“You double-faced bastard, get off me!”

“No. You put yourself here. Right here under me, Leo.”

He slammed his crotch right against hers and ground in.

She screamed as some unknown force kindled her center and the sensation rushed simultaneously south to her soles and north to her scalp.

She stiffened, trembling. Then whimpered. Then—

Private, horse-rider addict, great listener. Well, while we’re at it, how about gym-shy? Without my bestie, I’d visit those muscle-toning Meccas about once a month or so.

Cast your book. Tell us who would play the main characters in a movie and why.

For Leo, I’d love to have Saoirse Ronan (hair darkened and not bone straight), because Ms Ronan has that “special something” that Leo has. A complicated strength that’s at the same time fragile until provoked to come demolishing like the wrath of God. The aloof femininity that silently dares you, challenges you to try it for size and see if you can cope.

For Adrian, well, as I keep reminding myself, he’s already on the cover of the first book, complete with the ferocious wickedness, Etonian mannerisms and Oxford accent. Until Leo brings out the demon beast in him that sheds the mannerisms but maintains the accent. But, as per request, a couple of pix, including one of what he looks like in a black velvet bathrobe morning, noon or night. Those yellow-gold Egyptian god eyes brook no argument.

What’s your favorite love scene from a movie?

All my favourite love scenes haven’t been turned into movies yet, and I haven’t seen a love scene in a movie that I’d declare a favourite.

A gorgeous specimen of masculinity who takes forever to get me volcanic with his body, hands, gaze, voice and words that taunt me till I’m ready to murder to have him inside me, but too weak to even kneel for him. Then he eventually loves me like I’m sacred, before finally taking me like he just crawled out of his cave.

If you were to lose one of your senses, which would you rather lose and why?

My demonic taste buds. I’d finally be freed of my dark cravings for Belgian pralines! Especially like right now when every chocolatiers of the entire continent seem all out to get me with their Festive Season creations and mouth-watering packaging!

What is the naughtiest thing you did as a kid?

Honestly? Oh, wow, this is something I’ve only ever confessed to my husband. But… as curious a kid as I was, I routinely sneaked that makeup mirror (you know, the hand-held variety with one side magnifying?), locked my door and took a fine good look at myself, parting the folds. Have I said this was on a regularly basis? Well, I once wanted to be a gynaecologist.

(I take it we’re still talking about me?) The way my husband looked in them got me addicted to how his boxer briefs encased those crown jewels.

Oh, wow. Give me the moods and I’ll tell you which is when.

Pajama bottoms, please. I love searching for my eggs all year round. (Pssst, we honestly call them eggs in German!) Meanwhile I’ll be wearing the tops, most likely unbuttoned but the shirttails (pajamatails?) tied around my waist.

My naked feminine chest loves the feel of a man’s chest on them, not a boy’s.

Me or him? I’m pretty versatile. 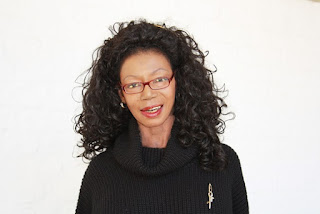 AP von K’Ory writes the kind of books she herself would like to read and is passionate about, whether romance, psychological thriller or nonfiction. She is the winner of six awards from four continents, the last one being the Achievers Award for Writer of the Year 2013 in the Netherlands. The Selmere Integration Prize was awarded her in 2014 for her engagement in helping African Women in the Diaspora cope with a variety of domestic and social problems. The Proposal, a short story, won the Cook Communications first prize in 2010 and is published in an American anthology Africa 2012. In 2012, she won the Karl Ziegler Prize for her commitment to bring African culture to Western society in various papers, theses, and lectures. Again in 2012, her book Bound to Tradition: The Dream was nominated for the 2012 Caine Prize by the Author-me Group, Sanford, and in 2013 she was shortlisted for the Commonwealth Writers Prize.

Von K'Ory is married to an aristocrat and politician of Franco-German descent, has a large extended family. She lectures Economics and Sociology in Austria, Germany and Switzerland. She’s migratory and – weather willing – lives in Germany, France, Cyprus, and Greece.

She may be reached at any of the following:

Sign up for news about me & the family, ARCs & Freebies:

Want to join up and receive ARCs from my next (or current) books? Please join the discerning readers at the link below: https://www.facebook.com/AkinyiReadersReviews/

It would be lovely if you could Like the book page and read the latest interviews and news about Shana and Roman on Facebook at: https://www.facebook.com/Goshanaliterotic

It would be equally wonderful if you could Like my Author page and read more about Shana and Roman new releases, cover reveals and what I’m up to lately on Facebook at:
https://www.facebook.com/AuthorAPVonKOry

Amazon: https://www.amazon.com/HIS-UNTAMEABLE-WICKEDNESS-VON-KORY-ebook/dp/B09XKL9R6N/
a Rafflecopter giveaway
Posted by Wendi Zwaduk and Megan Slayer at 12:30 AM

Thanks so much for hosting my Book Tour!