Blurb Blitz ~ Under the Cloud by BR Frank

It's a blurb blitz and this week, I'm featuring Under the Cloud by BR Frank. You'll want to keep reading. Why? This looks to be a fascinating book. Plus, B.R. Erlank will be awarding a $25 Amazon or Barnes and Noble GC to a randomly drawn winner via rafflecopter during the tour. How cool is that? Want more chances to win? Then follow the tour. You can do that here: https://goddessfishpromotions.blogspot.com/2022/10/blurb-blitz-under-cloud-by-br-erlank.html

Under the Cloud
by B.R. Erlank 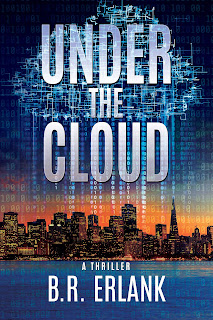 They call themselves The Settlement Bureau. A faceless, soulless organization coercing individuals with threats to expose their improprieties and vulnerabilities. Inhumanely persistent, they’ve secretly driven hundreds of victims into bankruptcy, despair – and several even to suicide.

But when this organization tries to blackmail IT expert Terry Reynolds, they make a serious mistake. Terry is down on his luck. He is penniless, divorced and in a dead-end job. Yet, the abuse of his personal information stirs Terry out of his lethargy and he fights back. He embarks on a digital game of cat-and-mouse with the cold, calculating minds behind The Settlement Bureau – and in doing so, uncovers a sprawling criminal conspiracy.

Under The Cloud is a chillingly plausible new thriller by B.R. Erlank. With a plot ripped straight from the headlines, advance readers warn, “this book delivers a roller coaster ride right up to the final pages.”

Charlie’s canine senses were on high alert. He growled and stared across the street. There was a commotion in the shadows of a tree. Then Terry heard a frail, plaintive voice, “No, no, leave me. That’s mine. Let go!”

Terry knew that voice; it was Joe. What sort of low-life attacks an old homeless man? There was a thud and a howl of pain. Charlie was the first to react; the dog raced across the street with Terry behind him. Under the streetlamp, Terry could make out the old man’s face, bleeding and distorted with fear, as he shouted, “You imbecile, you don’t know…”

The attacker was dressed in black and was at least six inches taller than Joe. The assailant pushed Joe hard, then his fist smashed into the old man’s face. Joe slumped against the tree, and the thug pulled back his fist for another punch.

The man briefly turned and hesitated. Then, before he could plant the fist again, Charlie lunged and sank his teeth into the man’s wrist. The attacker cursed, and a knife appeared in his other hand. The blade glinted in the streetlight, and Charlie’s bark turned into a surprised yelp, then a whimper. The attacker ran.

For a split second, Terry’s rage commanded him to follow, but the sight of Joe and Charlie, both crumpled and bleeding, stopped him in his tracks. He knelt by the old man, whose face was smeared with blood, one eye beginning to swell. His breath was coming in desperate rasps.

Boris Erlank grew up in Southern Africa. He has lived and worked in places as diverse as Luanda, Cape 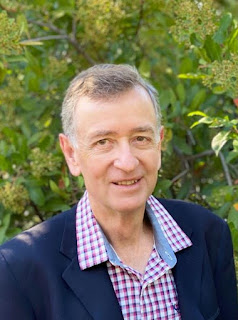 Town, Singapore and San Francisco. Boris recently gave up his job as Global Privacy Manager with a Fortune 100 company to focus on writing full-time.

He has an extensive background in IT, data privacy and cybersecurity, and has drawn on that experience to craft his latest novel, Under the Cloud. His previous novel, Catch You Later, is a murder mystery set in Cape Town.

Boris lives with his family and two dogs in the foothills of Mount Diablo, east of San Francisco. He likes to cycle and hike. “Those solitary pursuits give me time to dream up the characters and plots for my novels,” he says. Boris also enjoys choir singing, travel, and listening to audiobooks.

The book will be $0.99 from November 15 - November 22.
a Rafflecopter giveaway
Posted by Wendi Zwaduk and Megan Slayer at 12:30 AM

Happy Friday! I love the cover, synopsis and excerpt, Under the Cloud sounds like a thrilling read and I am looking forward to it. Do you have any specific reading or writing plans for the weekend?

Thanks so much for hosting my book! B.R. Erlank