It's a tour and this book is hot. Come check it out. The author is giving away a cool prize, too. What? Zhanna Hamilton will be awarding a $75 Amazon or Barnes and Noble GC to a randomly drawn winner via rafflecopter during the tour. Want more chances to win? Then follow the tour. You can do that here: https://goddessfishpromotions.blogspot.com/2021/08/vbt-blank-madam-doesnt-like-that-by.html 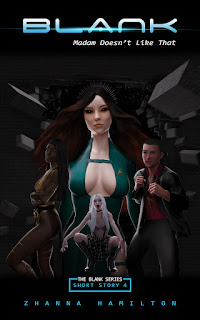 A former human turned military spy bot escapes the oppressive Solar Government, leaving behind a secret that turns order into chaos. Now, she’s being hunted.
Blank:
Madam Doesn't Like That (Short Story 4 of The Blank Series):
An unexpected visit from sex bots turns into a secret mission with deadly consequences.
Now for an interview with the author!
Describe yourself in three words.
Intuitive. Passionate. Curious.

Cast your book. Tell us who would play the main characters in a movie and why.
Aura Swain, the former human turned military spy bot, needs to be played by an actress that can morph into a multi-faceted antihero. Scarlett Johansson would be an ideal fit for this character. She has demonstrated her ability to embody such roles through an array of films, including Ghost in the Shell, Lucy and Black Widow.

As for her secret lover, Arlo Fuentes, he is a man secure enough to handle Swain’s strong personality. This is also a character in touch with his softer side and has the looks to get Swain’s attention in the first place. William Levy could bring this role to life with his on-screen charm and toned physique.

What is the naughtiest thing you did as a kid?
When I was a child, I would ask for candy and instead of eating it, I saved it. This practice eventually led me to have a stash of candy that I would eat whenever I wanted, without having to ask. Apparently, that was against the rules. The candy was confiscated!

Anything else you’d like to add?
If the readers would like to see celebrity reaction videos to The Blank Series, they can head over to my Instagram.
Now for an excerpt:

Arlo read a large sign passing by on the boulevard.

“What the hell is Razor doing?”

“Does what all the time? Never mind. Don’t tell me. We have to stop her.”

Zen crossed her legs, tapped the console with long, golden nails and stared past the protest.

He watched Razor lift a helmet off the ground and put it on, pumping her fist as she walked into the chanting crowd.

“Don’t we have somewhere to be?”

“This is ridiculous,” he said, stepping out of the pod. He tried to spot her. Nothing but angry strangers. Walking towards the crowd, he felt the electric energy of frustration.

He stood at the edge of the moving spectacle and scanned for Razor.

Against the grain of the crowd, he spotted the oversized biker’s helmet with flowing blonde locks extending beyond the edges. She grabbed a bat off the ground near a closed psychedelics store.

“Razor, no!” he yelled, his voice drowned by the raging chorus.
~~~~~~~~~~~~~
About the Author:
Zhanna Hamilton is a science fiction writer and the creator of The Blank Series. In May 2019, she released the first installment of the scifi series on Wattpad, “Blank: Begin Again,” which has been named in the top 100 list of femme fatale stories and chosen as an “Undiscovered Stories” Wattpad Pick on the independent storytelling platform--home to 90 million readers worldwide. Readers and future readers can follow Hamilton on Twitter at www.twitter.com/ZhannaHamilton.

Read “Blank: Where Do Machines Go When They Die? (Short Story 2 of The Blank Series)” on Wattpad:

Read “Blank: You Heard Me (Short Story 3 of The Blank Series)” on Wattpad:

Read “Blank: Madam Doesn’t Like That (Short Story 4 of The Blank Series)” on Wattpad:

The book will be Free during the tour.

Thank you for hosting! :)

Welcome to today's blog tour stop! I will be checking comments all day. Make sure to enter the giveaway if you haven't yet. Thank you for being here!

Thanks for sharing an excerpt! What book(s) or projects are you working on now? I mean, if you can share ;)

Sounds interesting, thank you for sharing!

I appreciate you stopping by, AuntySuzany! Hope to see you on Wattpad. :)

Hi, Elizabeth H.! My next release will be the 5th short story of this series. As for the other projects, I look forward to the moment when I can announce them! Thank you for stopping by. Hope to see you on Wattpad. :)

Thank you to everyone who dropped by! See you on the next blog tour stop or on Wattpad. :)

I love the cover! It sets the tone for the book.

I appreciate that, Wen! Hope you get a chance to check out the series on Wattpad. :)