Come with Me by Beth D Carter 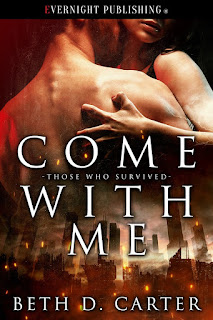 1.What was your inspiration behind this book?
I love writing about dystopian worlds because you can basically create your own version of the future. And since I happen to like writing about women who don’t know their own strength, this genre lets my imagination soar.
2. Do you ever find yourself slipping away and becoming so immersed in your  story it affects how you relate to others?
Yes.  I’m an introvert to begin with, but when my brain is filled with how to write the next scene I can go for days and forget to call my mom or put off grocery shopping until the next day, and then the next day after that.  Before I know it, a week has gone by without shaving my legs.  Gross.
3. Are you in any of your books?
There’s a little bit of me in every book, I think.  Maybe it’s just a random thought or a gesture, but something of me is in all my characters.

4.  Are you a plotter or a pantser?
Total pantser, although in my mind I do have an idea of where the story is headed.  My characters always surprise me when they make a one eighty from where I thought the story was going.  But as a writer you should always listen to your characters, because they’re basically your muse talking to you.

5. What is your favorite line, or scene, that you wrote in Come With Me?

I had a difficult time coming up with a title for this story. I wanted something clever but one line kept jumping from the page: Come with me. Nolan says it several times to Lainey. I eventually reached a point where I realized that one phrase meant everything.

6. If you could choose, which published author would you like to brainstorm with and why?

Lisa Kleypas because I love how she paces her novels and I’d love to pick her brain on how she plots them out. Or Julia Quinn because she’s hilarious and I have a feeling she likes wine like I do.

7. When you were little, did you ever think you'd be a published author? What was your "dream" job as a child?

My dream job as a child was being Indiana Jones.  When that didn’t pan out, I became responsible by going into the medical field. Being an author was always in the world of fantasy. I grew up in the early Eighties in the backwoods of Missouri, so no, I never thought in a million years I’d be a published author.  Thank holy heck for modern technology!  Ebook publishing opened up doors to me, and to many talented authors, to make our dreams possible.

8. What was the worst job you ever had while working towards being a published author?

I worked one day as an assistant to a urologist. I thought seeing penises all day long would be cool but come to find out, there’s a big different between thirty year old penises and seventy year old ones.

9. And last, do you have anything you would like to say to your current readers or to those that haven't yet read your work(s)?

First, I’m a really funny person but my humor is dry, bordering on sarcastic. I put a lot of that in my stories, usually in the form of a sidekick or secondary character. Second, I write stories because I want people to read them. I write for the love of writing. And I love feedback. Yes, I’m trying to make a living but nothing makes me happier than to get an email from someone saying they liked something I wrote (or if you didn’t like it, please nicely tell me why it sucked). So drop me a line anytime to say hi…you can find me on Facebook, Twitter & Instagram:

1. My job. When I go to my day job I have to put my writer brain on hold and sometimes that is so irritating, especially when I get an epiphany about the plot.

2. Insomnia. You’d think staying up at night would be a great time to write, but insomnia turns your brain to mush and renders it unable to string coherent words together.

4. My muse. I’m hard at work trying to write out a complicated and scene and she’s like “Wait! I’ve got this awesome idea for another story!” Most of the time she wakes me up at three am. Bitch.

5. Character changes. Most of the time I can envision the beginning and ending to a story, but every once in a while the ending slips away, due to the direction of where the characters take me. When that happens I struggle a lot to maintain the plot. I’ve shelved some great stories because of this.

Those Who Survived Part One
Lainey is one of the few that survived the virus that ravaged the human population. In order to remain safe, she stays away from people, preferring to live on her own. Not trusting anyone. Until one night she’s attacked and rescued by a stranger who insists that there’s still good in the world.
Nolan has a fantastical story of a new civilization in Canada, and urges her to go with him. Lainey doesn’t know if she believes him or not, but the unknown is enough to scare her away. Yet day after day he slowly breaks down her walls, opening her up to the possibility that she might be strong enough to take a chance not only on him, but herself as well.

Sex had never been that big of a deal for her, and the couple of men she’d slept with never rocked her boat. It became easier and less messy to ease the occasional sexual need herself. Draping her knee over the ledge, Lainey wished she had thought to bring a toy with her. So instead she closed her eyes, slid her fingers between her thighs, and imagined Nolan watching her as she pleasured herself.
She glided her fingertips over her skin, starting at her throat and letting the backs of her fingers trail down her chest. Between her breasts. Over her flat stomach. The water sloshed gently against her labia, providing its own stimulation.
Gently, with featherlike touches, she brushed her fingertips over her pussy lips. The tease made her hips undulate and her climax rise sharply. She wanted to come so bad, but just as she was about to let herself fall, a slight noise startled her. She jerked her eyes open and saw Nolan in the doorway, staring intently. Embarrassed, she pulled her hand from between her thighs and lowered her leg back into the water.
“W-what are you doing?” she asked, her voice dry. Heat burned on her cheeks.
“You didn’t have to stop,” he murmured.
“Uh, yeah, I did.” She tried sinking lower in the tub to hide herself. “Please. Leave.”
He nodded. “I’m sorry for bothering you. But there is absolutely nothing to be embarrassed about, Lainey. We all need to find comfort in our lives.”
She wished the earth would open up and swallow her whole.
“Oh my God,” she muttered. “Just go!”
He did, leaving as quietly as he had appeared. Rising from the bath, she quickly dried off and rushed to put on clothes, all the while chastising herself for being so vulnerable. She should never have brought him here to her home. How could she ever face him again?
That night she hid in her room, unable to go down for dinner and sit across from him. To see the smirk on his face, knowing he caught her pleasuring herself. She spent the evening writing him a letter so she could slip it under his door, asking him to leave. Hours later, when it was all quiet, her stomach kept growling with hunger. Opening her door to make sure the coast was clear, the house lay completely still and silent. She looked down the hallway and saw Nolan’s door was closed. Moving slowly, quietly, she headed downstairs for a snack, finding a granola bar and some chips. Not the healthiest, but enough to take away the hunger pangs.
Going back upstairs, she took the letter out of her back pocket, ready to slide it under Nolan’s door. However, it was no longer closed, and a low moan came from inside. The voice in her head told her to run away, go back in her room and hide, but that devil riding on her shoulder urged her forward. Step by step, until she stood at the entrance of the darkened room. Outside light filtered in, highlighting the big man lying naked on his bed. His hand gripped his cock, stroking it from base to tip. The sight captivated her, the letter forgotten in her hand. His big body arched in his pleasure, and she couldn’t help but realize he did this for her. To show himself in the most vulnerable light just as he had seen her. Lainey stepped further into the room, unable to stay back. He turned his head, their gazes locked.
“I’ve been thinking of you,” he said, his voice almost guttural.
He held out his hand and she stared at it for a moment, the conflict inside her mind came roaring back an in instant. She knew what taking his hand meant.
Come with me.
Buy Links: