This post is part of a virtual book tour organized by Goddess Fish Promotions. The author will award a $25 Amazon/BN gift card to a randomly drawn commenter. Click on the tour banner to see the other stops on the tour.

“I’ll start at the beginning. Long ago, before roads, before we built structures, before medicine was discovered, before the government was created, before man gained any knowledge, there were The Five. Independent from each other, The Five had a mutual respect for one another. They knew their roles in the world and their duty. They were gods…”

An adventure begins when an otherworldly tree captures the attention of Megan and her friends. The environment morphs around them, transferring them to an exotic planet. Stuck in a rural town still maimed by the plague, a chance encounter with a familiar face gives Megan and her friends some security during their adjustment period.

While settling into new, promising lives, they are attacked and stalked by planet Dalya’s humanoid inhabitants, who focus on Megan. One dark night, after an epic, magical attack, the Fae King’s knight is sent to fetch Megan. When she wakes up a prisoner, she learns that there is much more to this strange world, and it is oddly more like her own than she ever would have expected.

Today has been a whirlwind, and I’m not looking forward to tonight. I’m positive the elite members of society will flaunt their latest ensembles. A competition among the wealthy to win a proverbial pat on the back for the best dressed. A sport for the rich. They won’t work up a sweat—that’s for the poor. Instead, they compete with wits and money. Women prancing around wearing cage ball gowns, adorned with priceless jewels. Their main goal is to uncover juicy gossip while competing for the wealthiest bachelor. Men swirling this world’s version of expensive scotch talk business and watch women swoon. It can’t be very different from Earth’s aristocratic affairs, not that I ever attended. Movies and the internet displayed enough information to know what to expect.

I had assumed it would be a rather humdrum affair, but my opinion changes quickly, standing before the colossal golden doors. Realization hits me. I am so naïve.

It feels like I’m walking into a fairy tale, but the darker Brothers Grimm version.

Beautiful, handcrafted, golden double doors depict a grand party. Intricate artwork chiseled into the doors displays two long banquet tables of food, roasts on fancy platters, piles of vegetables, and dainty desserts. Between the buffet tables, people adorned with masquerade attire dance. They wave, inviting everyone to the party. Guests laugh, drink, and enjoy themselves under the watchful king. The artwork depicts the king having fun, but there’s no doubt in my mind that he studies everyone, meticulously watching individuals, judging their personality, appearance, and demeanor while in his presence. A crooked smile peels his lips back—it hints at his sly and cruel nature. I can’t help but look at the doors and realize this is a perfect portrayal of what awaits me.

Instead of a warm welcome, it’s a stern warning. 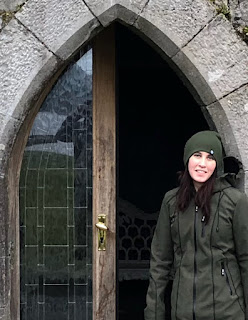 Katie Zaber writes new adult fiction. With multiple projects spanning from being transported to an alternate universe, to past lives, reincarnation, and trapped souls, to prophesied pregnancies—there are more stories to tell. She lives in North New Jersey with her boyfriend.

Thank you for hosting :)