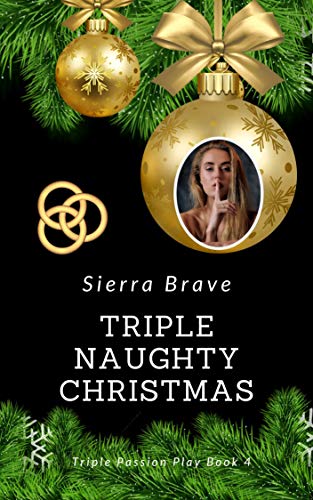 Two husbands, four kids, a gaggle of nosy neighbors, a car accident, the best present ever, a naughty party, and a mother-in-law expected for Christmas. How will Trisha ever pull it off?

Navigating the Yuletide season can be a challenge for anyone but after hosting their family Christmas celebration for more than fifteen years, forty-something mom, Trisha Marks-Davidson, believes she’s conquered Santa and tamed all of his reindeer. Anything but ordinary, Trisha’s family of seven consists of herself, her two husbands, Tommy and Ken, and their four kids. Despite their unusual situation, she’s cultivated a system for a fun-filled holiday packed with their own special traditions.

Trisha, Tommy, and Ken are pleased with the quiet, comfortable life they’ve built together but are disturbed to learn the novelty of their three-way union still hasn’t worn off for some members of their community even after nearly two decades. A last-minute decision to attend a neighborhood Christmas party could be the trio’s undoing. The opportunity to set the record straight is there for the taking but actions speak louder than words and temptation is all around them.


Although reading any of the previous books in the Triple Passion Play series would add to your enjoyment, Triple Naughty Christmas can be read as a stand-alone, HEA story.

Warning: This book contains graphic language and sexual situations, homosexuality as well as a positive depiction of a bisexual poly-relationship. If you will be offended, please do not read.

Now for a Short Excerpt:

Once he was undressed, Thomas opened his travel bag, pulling out a box wrapped in silver paper and topped with a white bow. He placed it on the nightstand closest to Ken before he attempted to slip under the covers with his spouses.


“Well hey.” Ken’s voice was groggy as he rubbed his eyes. “What time is it?”


“Too early in the morning—I hadn’t meant to wake you.” Thomas combed his fingers through Ken’s silky, black hair, pushing his bangs away from his steely gray eyes before placing a kiss on his forehead.


“That’s okay. I’m not the one you need to worry about.” Ken’s tone was low as he tilted his head towards the blond sleeping next to him. “Trisha’s been in a mood today. Mommy dearest called.”


“Ah, Attila the Mom,” Thomas agreed in a whisper.


As Ken sat up, the covers sagged around his abdomen, showing off his bare chest and the sexy V-shape his torso made when his lean stomach met his hipbones. Thomas couldn’t help reaching over and running his hand from one hard, toned pectoral to the other. Ken wasn’t a big guy like himself, but he kept fit, making sure every inch of his body showed his well-defined, hard-earned, muscle tone.


“Mmm.” Ken closed his eyes, sucking air into his nostrils. “You better make sure you’re up to finishing anything you start.”

Other books in the Triple Passion Play series: Can love between three survive?
Rock You Like a Hurricane

Instagram: https://www.instagram.com/sierrabraveauthor/
Posted by Wendi Zwaduk and Megan Slayer at 12:30 AM