Book Blast ~ Much Ado About a Widow by Jenna Jaxon

This post is part of a virtual book tour organized by Goddess Fish Promotions. Jenna Jaxon will be awarding a $25 Amazon or B/N GC to a randomly drawn winner via rafflecopter during the tour. Click on the tour banner to see the other stops on the tour. 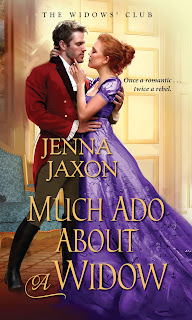 Lady Georgina Kirkpatrick defied her family, jilted her fiancé, and married the man she loved. But when her husband died at Waterloo, she was delivered right back into her father’s power . . .

Victory is sweet—but England’s triumph was Georgie’s rout. Now that she’s widowed, the loathsome marriage her father first arranged has simply been renegotiated. With neither money nor rights, and nowhere to flee, all she can do is cherish her last weeks of freedom. . . . Until a band of ruffians overtake her carriage and kidnap her. When she escapes in seaside Brighton and encounters her brother’s rather wild friend, Lord St. Just—whom she suspects aspires to be a pirate—she’s prepared to entertain more of his adventurous suggestions than usual . . .

St. Just knows his mind and his duty, and he loves a challenge. Helping a fair lady make her farewells to hoodlums suits his talents well. Within the hour he has Georgie, her lady’s maid—and her little dog too—sailing for his castle in Cornwall. Meanwhile, the lady’s entire family, her kidnappers, and her scheming intended are in pursuit. But as he and the indomitable Georgie grow closer, he begins to suspect that together they will prove a match for them all . . .

“What is all this fuss about, Lulu? You can’t need to go out again so soon.” Peering over the dog’s head, Georgie looked at her father’s outrider cantering beside the carriage.

“Goodness.” The maid stretched and stifled a yawn. “I must have fallen asleep.”

“That’s quite all right.” Georgie’s attention was fixed on the rider. “Look at the man riding alongside us, Clara.”

The maid glanced out the window and shrugged. “What about him?”

“He’s not one of my father’s outriders.” Frowning as she pressed her face against the cold window pane, Georgie moved her head this way and that, seeking a better look.

“He’s not?” Clara slid over to gaze out the window as well. “Then who is he?”

“He’s the man I told you about, the one with the flattened nose who was watching me in the inn yard.” Georgie bounced over to the other side of the carriage, panic rising at the sight of another unfamiliar outrider. “This one too. Folger!” She leaped to her feet and banged on the trap. “Folger! Who are these men? What is going on?”

The chilling silence that ensued was punctuated by the high crack of a whip. The carriage shot forward, throwing Georgie back into her seat, where she narrowly missed Lulu, who was barking wildly.

Georgie’s composure slipped, and dread threatened to engulf her, but she took a deep breath to steady herself and announced, “I am very much afraid we are being kidnapped.” 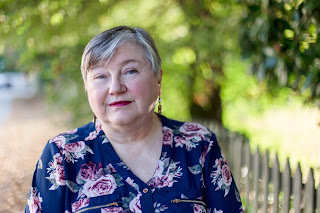 Jenna Jaxon is a multi-published author of historical and contemporary romance. She has been reading and writing historical romance since she was a teenager. A romantic herself, she has always loved a dark side to the genre, a twist, suspense, a surprise. She tries to incorporate all of these elements into her own stories. She lives in Virginia with her family and a small menagerie of pets. When not reading or writing, she indulges her passion for the theatre, working with local theatres as a director. She often feels she is directing her characters on their own private stage.

She has equated her writing to an addiction to chocolate because once she starts she just can't stop.

Thank you so much for hosting me today!

This is such a pretty cover.

Thank you, Sherry! It's one of my favorites in the series, all done by Jon Paul Ferrara.