Running From the Cyborg by @AnneKane #scififantasy #romance 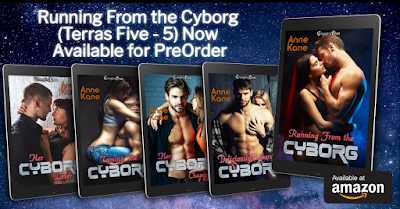 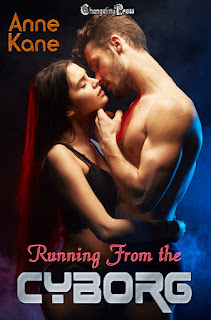 She can run but she can’t hide from the sexy cyborg who has her in his sights.

Caitlyn: Gorgeous. Feisty. Human. A survivor in an unforgiving galaxy. Running from an enemy she can’t see for reasons she doesn’t understand. Whoever he is, he’s trying to kill her.

Jakob: Large. Mouthwateringly sexy. Loyal. Cyborg. Determined to find the female who seduced him, gave him a night he’d never forget, then disappeared before he woke. When he finally manages to catch up to her, he intends to do whatever it takes to keep her at his side.

Jakob stalked toward her, two hundred plus pounds of naked rippling muscle and attitude. His stiffly erect cock outlined in mouthwatering detail beneath his flight suit left little doubt as to what he wanted. Unfortunately, the glare he directed at her said he probably wanted to tan her hide first.

Not that she didn’t deserve it. She had snuck out on him without any explanation the last time they were together. Caitlyn had a feeling that cyborgs didn’t appreciate being tricked. Something to do with their manly image and all that.

She stood her ground, eyes darting wildly in all directions, seeking an escape route.

She let out a long sigh. Not happening. Not this time. He’d caught up to her on one of the smallest and most crowded space stations in the sector, leaving her with limited options. Only one viable one, really. Try to deflect his anger with sex.

Hey. A girl had to use whatever worked.

He stopped a bare arm’s length in front of her. If looks could kill, she’d be dead at his feet. He was still glaring when he pulled her into his arms and covered her lips with his mouth.

Damn he tasted good. Too good. If she weren’t careful, he could be her downfall. She wanted to run away and hide almost as much as she wanted to spread herself naked beneath him.

This was crazy. Totally, completely, utterly crazy. She was acting like some lovesick idiot, not a grown woman who had been taking care of herself since she was orphaned at the age of fourteen.

Jakob gentled his hold and ran his tongue across the seam of her lips, coaxing her to open. When she complied, he took immediate advantage, plundering the depths with his tongue.

She resisted for the merest fraction of a second before melting against his warm bulk, reveling in the feeling of his hard body against her.

Her reaction to Jakob confused her. She’d never felt this kind of connection to a male before, cyborg or human. Never cared beyond the gratification of the physical act of joining. Too much was at stake to let herself get carried away with sentimental nonsense like love and happily ever after.

Hell, that was one of the reasons she preferred to satisfy her amorous side with cyborgs. Cyborgs were sensible when it came to sex. They were generally happy to play; love them and leave them. Cyborgs didn’t do forever, which left a big question unanswered.

Why had Jakob pursued her across the vast reaches of the galaxy? This wasn’t supposed to happen.

She sighed, stretching her arms up to wrap them around his neck. Lust swept through her in a deliciously warm wave. To hell with expectations and unanswered questions. She wanted him, and by the size of that bulge in his flight suit, he wanted her just as much. She could afford to take the time to satisfy that need before she abandoned him again.

As if sensing her surrender, Jakob scooped her up in his arms, striding through the crowd on the automated walkway. The tavern just beyond had private rooms available. It looked like that was where they were heading, which suited her just fine. She wasn’t sure if she’d be able to make it all the way back to his ship without doing something deliciously naughty.

Like sticking her hands between them and stroking that monster of a hard-on?

Jakob lifted his head. Something dark and dangerous glittered in the depths of his eyes. “What the hell were you thinking, running off like that? You didn’t even bother to say goodbye.”

So, he hadn’t quite gotten over that yet. Caitlyn raised her brows, refusing to surrender to his anger. “Goodbyes are overrated. I’m not one of your Terras Five breeders. I can take care of myself just fine, and I don’t owe you any explanations.”

“The hell you don’t.” He looked magnificent in that moment, exuding a raw sexuality, that sent a frisson of lust curling through her belly. Holding her close, he kicked the door to the tavern open and made straight for the back rooms, nodding to the barkeep on his way past. “I wasted the last moon cycle tracking you down.”

Shouldering his way into a private room, he lowered his head, reclaiming her lips. The kiss was pure alpha male, dominant and demanding. He ravaged her mouth, tasting, exploring, leaving her no doubt as to his intentions. Growling low in his throat, he set her on her feet, letting her slide down the length of his body. Holding her tight against him with the thick bulge of his cock pressed into her belly, his hands roamed her body. He pushed her shirt aside to explore the naked skin beneath.

She sighed, melting against him as she realized just how aroused he was. Angry and aroused. A very dangerous combination in a cyborg. She should be scared, but the heat radiating up from her loins left little room for anything but lust. She’d had other lovers, but none had ever left her feeling this raw hunger.

She moved against him, shaping her body to his as she returned his kiss with an intense passion. Rubbing her body against his, she played a dangerous game, taunting him with her own lust.

Consequences be damned. She needed this.

He pulled his mouth away from her lips. “Strip.”

Available from the Following Retailers:

Her hobbies, when she’s not playing with the characters in her head, include kayaking, hiking, swimming, playing guitar, singing and of course, reading.

You can find Anne around the web at:

Goodreads: https://www.goodreads.com/Annekane
Posted by Wendi Zwaduk and Megan Slayer at 12:30 AM

Thanks for hosting me on your blog!