This week's tour features The Hierophant's Daughter by MF Sullivan. You'll want to follow the tour. This book looks fantastic. Not only that, but there are prizes to be won. Like? One randomly chosen winner via rafflecopter will win a $50 Amazon/BN.com gift card. How cool is that? Want more chances to win? Then follow the tour. You can do that here: http://goddessfishpromotions.blogspot.com/2019/02/vbt-hierophants-daughter-by-m-f-sullivan.html 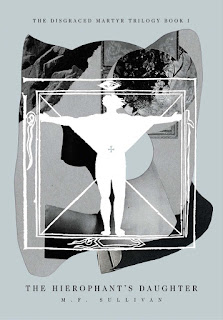 By 4042 CE, the Hierophant and his Church have risen to political dominance with his cannibalistic army of genetically modified humans: martyrs. In an era when mankind's intergenerational cold wars against their long-lived predators seem close to running hot, the Holy Family is poised on the verge of complete planetary control. It will take a miracle to save humanity from extinction.

It will also take a miracle to resurrect the wife of 331-year-old General Dominia di Mephitoli, who defects during martyr year 1997 AL in search of Lazarus, the one man rumored to bring life to the dead. With the Hierophant's Project Black Sun looming over her head, she has little choice but to believe this Lazarus is really all her new friends say he is--assuming he exists at all--and that these companions of hers are really able to help her. From the foulmouthed Japanese prostitute with a few secrets of her own to the outright sapient dog who seems to judge every move, they don't inspire a lot of confidence, but the General has to take the help she can get.

After all, Dominia is no ordinary martyr. She is THE HIEROPHANT'S DAUGHTER, and her Father won't let her switch sides without a fight. Not when she still has so much to learn.

The dystopic first entry of an epic cyberpunk trilogy, THE HIEROPHANT’S DAUGHTER is a horror/sci-fi adventure sure to delight and inspire adult readers of all stripes.

What couldn’t a person access from the Japanese Internet? The question inspired Dominia to get out of the bathtub for another look at the card. There was no address, whether web or physical, as there hadn’t been an address on the ad floating across that billboard; instead, when she studied the lotus embossed upon the card, the DIOX-I highlighted it as though it were a link. How fascinating, this augmented reality! After fixing the device’s settings back to manual control, she “clicked” on the link with an unsteady wink, and her right field of vision was covered by the floating window of a browser. Had she cochlear implants, she would have heard some sort of music, or even a voice accompanying the woman’s writhing in and out of the browser’s dark: less a whole person, and more a disembodied assortment of lips, fingers, lower backs, and thighs. At last, the vision disappeared to present her with the crimson words, “WELCOME TO THE RED MARKET.”

A button appeared: “Connect Your Halcyon for Age Verification.” The idea of giving the women of the international and highly loathed illegal organization any information might have stopped her in a simpler time, as it surely stopped 70 percent of potential Red Market customers—the ones able to access the site, anyway, inaccessible from Europa and the Front through traditional routes. That had been all the Hierophant could do to combat in any meaningful way the world’s oldest profession-cum-cult. Far trickier than hampering Internet access was controlling in-person transactions in gold or silver, or the off-brand cryptocurrency, Redcoin; and because there were almost no freelance prostitutes left in the world, catching a working girl was difficult.

M.F. Sullivan is the author of Delilah, My Woman, The Lightning Stenography Device, and a slew of 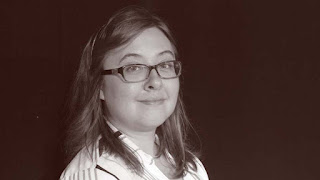 plays in addition to the Trilogy. She lives in Ashland, Oregon with her boyfriend and her cat, where she attends the local Shakespeare Festival and experiments with the occult. Find more information about her work (and plenty of free essays) at https://www.paintedblindpublishing.com!

Good morning, thanks for hosting! Any scifi readers out there? PS: readers buying a hardback of THE HIEROPHANT'S DAUGHTER from the Painted Blind Aerio store can get 15% off by using the prom TEAMBASIL. Check it out! https://paintedblindpublishing.com/painted-blind-bookstore/

Promo code, that is! Hahah. Thanks again!

Great excerpt, I enjoyed reading it!

Thanks for sharing, sounds great