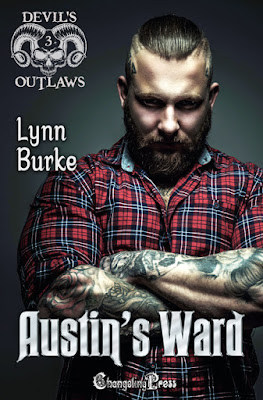 
He won’t stop until her safety is secured—even if it means his heart is lost in setting her free.


As the Devil's Outlaws Sergeant at Arms, Austin Butterbaugh has no intention of getting involved. A self-proclaimed bachelor for life, he endured a broken heart and refuses to suffer the same again. But the second Cadence Fraser crosses his path, with her long blonde hair and curves, she owns him.

Sleeping with a senator didn’t offer Cadence the ticket to a better life she’d hoped for. Instead, she's on the run for her life, straight into a badass biker’s arms—as his ward, under the Outlaw’s protection. Although fire flares to life between them, and Austin satisfies her in ways she’d never known, fear has Cadence’s sights set on something more.

With the senator hell-bent on eliminating every trace of his indiscretions, bodies will fall in Austin's determination to protect Cadence. Failure won’t be tolerated, even if saving her could mean losing her forever. Her happiness is all that matters, but can Cadence fight past her fears to see a future with Austin before it's too late? 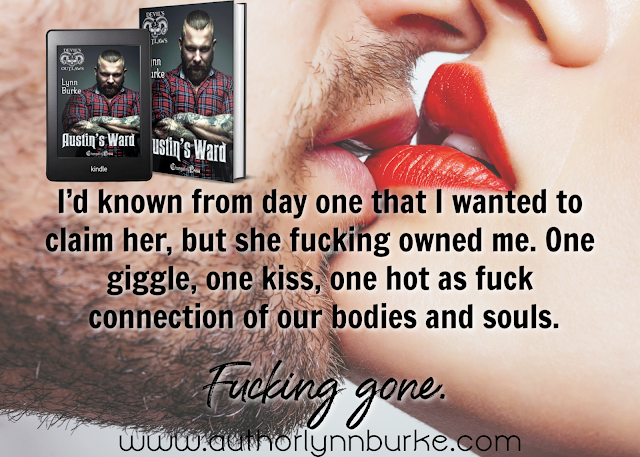 
“Take the bed,” he said and closed himself in the bathroom—with the bottle of whiskey.

Eyeing his bed, I chewed on the inside of my lip. I glanced at the couch he’d vacated. It wasn’t nearly long or wide enough for his height and bulk.

“Shit.” I heaved a sigh and crawled under his comforter, burying my face in one of the two pillows. Perfume a la Austin flared heat up through my body, and I closed my eyes as the devil on my shoulder insisted scratching an itch never hurt anyone.

“The fuck it didn’t,” I muttered, punching the feather pillow and curling up on the bed’s edge, facing away from the bathroom door.

The shower turned on, and I imagined Austin using that bar of soap I’d had all over my body running down the bumps and valleys of muscle lining his. Did he grow hard while washing his cock? His balls?

I bit the inside of my lip, determined to keep my hands beneath his pillow.

Did he stroke his length, head tipped back, while thinking about me in his bed? I knew he wanted me—the sexual tension between us could have electrified the entire compound for a goddamn week.

A low groan snapped my eyelids open, and I held my breath, ears straining.

“Fuck.” The low, drawn-out curse coming from the bathroom pebbled my skin.

“Damnit.” I growled, my entire body like a live wire, ready to burn down my fucking life.

The water shut off, and again, I held my breath, ears ringing for sounds of his movement. Water ran again, and I realized I hadn’t brushed my teeth—not that I had a spare toothbrush in my bag anyway.

A quick exhale into my cupped hand revealed I wouldn’t knock out a dragon, but still.

What did I care? I grumbled a bit more in my head, but the opening of the bathroom door stalled all thought.

Austin moved into the room, and I listened as he opened a cabinet and shut it. Unable to help myself, I shifted onto my back.

A towel slung low around his hips.

My mouth flooded with drool, and I bit back a moan as he turned. Rippled abs snagged my focus. The sexy as fuck V of muscle disappearing beneath the towel turned my mouth’s drool factory on maximum.

“Just going to grab my pillow,” he muttered, moving toward the bed, his low voice pebbling my skin again.

“There’s plenty of room in the bed,” I heard myself say, hating the breathless tone that escaped—and how the final word cut short on a squeak as I lifted my gaze to his face.

Quiet rang in my ears for a few heartbeats as we stared at one another, heat licking over my skin, flushing me from head to toe. The promise in his eyes of more than a mere fuck, in and out, thank you darlin’, sent a shudder through me.

Austin wouldn’t be kind or gentle in the sack. He seemed the type that would tie a girl up, use her to satisfy his every whim, and leave her a spent and smiling from exhaustion. My mouth dried, nipples pebbled to painful points.

“Couch is kind of small,” he said, tearing his gaze away first, his brow furrowing.

I tried to swallow the dryness from my throat as the tension simmering between us intensified, crackling with energy enough the hairs on my arms rose.

“You’re very alert and cautious,” I said, desperate to get my mind off fucking and how good every inch of him would feel pressing me down into his mattress.

I remembered how his gaze had scanned the strip joint’s parking lot before we’d left, the glimpses he’d tossed from mirror to mirror as the miles had faded behind us, until I couldn’t keep my eyes open any longer and had ended up with my head against his truck’s passenger window.

“What made you that way?” I asked, needing to fill the silence, needing to end the sexually charged atmosphere choking me.

“Long fucking story that’s none of your business.”

Grumpy much? At least his abrupt words eased the unbearable ache between my thighs. “Is your name really Austin?”

He hesitated a moment before answering. “Butterbaugh.”

The name didn’t match his badass biker sexiness one bit, and I found myself wanting to giggle. “Are you really from Texas?” I asked what Hannah had already told me.

I nibbled on the inside of my lip again, unable to help from ogling his massive chest as he studied the apartment around us as though desperate to keep from looking at me in his bed. “What brought you to D.C.?”

I frowned at his disinterest in elaborating. “Are you always this closed off?”

“Are you always this nosey?”

I huffed and considered turning away, but he dropped the goddamn towel and slid under the comforter before I could move.

Blinking didn’t erase the image of his semi-hard cock hanging low between his thighs I’d caught a quick glimpse of. So much for the desert mouth. Drool flooded, and I swallowed. “You could at least put on some boxers,” I managed to croak as if I had zero desire to have his naked ass in bed with me.

Scratching the itch won’t hurt. I scowled at the ceiling at the devil’s voice in my ear.

Safe. I held in my snort. Perhaps safe from the senator for the time being, but certainly not from my libido.

Other Titles in this Series:
Bowie's Angel #1
Gunner's Flame #2