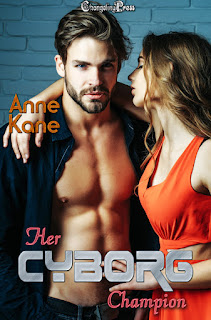 An intergalactic game of hide and seek, with a sexy human female as the prize.

Zoe is five feet, six inches of green-eyed, red-haired militant activist. A deeply ingrained need to help those who can’t help themselves -- human and otherwise -- motivates her every move. She snuck into the Mailon research facility to investigate rumors of experiments being conducted on a rare and highly intelligent species of sentient mammals. Now she finds herself in need of help to rescue one very sick little battle rat.

Greyson is six and a half feet of ruggedly muscular cyborg with a penchant for violence. He loves to fight, and he fights to win. What he hates is being sent to the Mailon research facility on a petty errand. When he catches a glimpse of a former lover flitting around the facility like an impossibly sexy cat burglar, he is intrigued. What is the saucy little wench up to, and why is she stalking him through the corridors of the alien laboratory?

“So what’s the plan?” Greyson swiveled the command seat to look at his passenger. Passengers, actually. Since bringing the bedraggled little bundle of fur aboard, he’d come to realize that the battle rat was definitely a sentient being, and understood most, if not all of what was being discussed.

She might not look like much, and he certainly didn’t expect the battle rat to be an asset in an actual battle but she was starting to grow on him. Who would have believed he had a compassionate side? Certainly none of his platoon mates in the outer rim battalion!

Zoe let out a long sigh. “I hadn’t actually got past the part where I used your trip to the research facility to facilitate getting her out of there. I’d like to take her back to her home, to her own kind but I have no idea where that is.”

Greyson titled his head to study her. “So how did you find out she was in the facility?”

“Mailon carelessness. They did a news release on some new tech development and she showed up in the background of one of the info shots. One of my contacts sent me a still frame of it, and the location of the facility. They knew I’d find a way to get her out of there.”

“So why didn’t you just go for the usual media route to get her freed?”

Zoe shook her head. “Wouldn’t work. The Mailons have a lot of clout with the big stations and they’d be leery of airing anything that might cut off the gravy train. These little critters might be cute, but they don’t have any hard currency to barter with.”

Greyson reached down to scoop up the battle rat. The little creature cooed at him. She sounded happy, although for all he knew maybe that sound was her battle cry. She batted her eyelids at him, and he chuckled. If he didn’t know better, he’d think she was playing coy.

He looked over at Zoe. “You should give her a name. We can’t keep calling her ‘the thing.’”

Zoe shrugged, her attention on the star chart dancing in the air in front of her. “I would imagine she has a name. We just have no idea of what it is.”

“Well, she needs a name we can pronounce.”

Zoe let go of the star chart and it blinked out of existence. She glided over to his side with a graceful movement that set his libido in gear. It took more than a little self-control to quash the urge to take her in his arms and ravish her.

She cocked her head and studied the creature. “How about Joan? As in Joan of Arc from the stories from Old Earth? I don’t recall the whole story but she was a female warrior of some sort. It seems suitable for a battle rat.”

Greyson still had his doubts about the thing’s ability to defend itself, let alone wage battle but he saw no reason to bring that up. He reached out to ruffle her fur. “Joan it is. What do you think of your new name?”

As if she understood the conversation, the newly named Joan chortled happily and bounced up his arm to drape herself across the back of the command chair.

“I think she’s adopted you.” Zoe grinned at him.

“You might try explaining to her that you were the one who rescued her.” No way was he going to admit that he enjoyed the little fur ball’s company.

“Nope. Too late. She’s bonding with you. Maybe we won’t have to worry about where her home is.”

“Well right now we’re on course to the supply station in the Gliese system. Once we get there we need to figure out where we’re going next. “

“Where were you heading before I interrupted your plans?”

“Terras Five, but I’m not sure you want to go there with me.”

Gods. Even that small gesture went straight to his groin.

“Have to say you have a point there. Maybe you could drop me off on one of the human space stations? There must be one in the vicinity.”

“There is, but it’s a military facility. I’m not sure you’d pass their security clearances. I seem to recall you have a bit of a checkered history.”

She waved her hand dismissively. “I have a couple of alternate sets of I.D. I’m sure I’ll be fine.”

He arched his brow. “There’s also the other problem with that idea. What if I don’t think it’s a good idea to leave you on a base crowded with testosterone-driven males?”

She laughed. “Are you serious? You think they’d be worse than you? We barely keep our clothes on long enough to eat.”

“On the contrary, I think they’d be exactly like me -- which is why I object.” He leaned back in his chair and grinned up at her. “Although they wouldn’t be as proficient at the sensual arts of course. I’m sure you’d be disappointed.”

Her hobbies, when she’s not playing with the characters in her head, include kayaking, hiking, swimming, playing guitar, singing and of course, reading.
You can find Anne around the web at: