Book Blast ~ Fall Beside You by Riley Parks

This post is part of a virtual book tour organized by Goddess Fish Promotions. $15 in Boroughs Bucks will be awarded to a randomly drawn commenter. Also, Boroughs Publishing Group can't wait to give you a Xmas gift in July. Join the party: https://www.facebook.com/events/202551280465596/?active_tab=discussion. 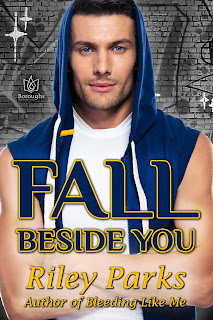 Gideon Valsecchi had done the impossible when he busted out of the grueling poverty and pre-ordained existence his life had been on the South Side of Chicago. His free ride at college is the stepping stone to a career with a professional soccer team. And when his dream comes true it's not what he expects—sacrifice shouldn't taste this bitter, especially when the love of his life is what he's missing and can't seem to hold on to.

Elijah Tucker wants to give Gideon Valsecchi the world on a silver platter. And he has the means to do it. But Eli is learning the truth of the maxim that the way you hold onto the thing you want most is to let it go. And while his heart breaks into a thousand pieces, he doesn't come apart even when the worst happens. Because, even as cliché as it sounds...true love does find a way.

“Are you feeling a’right?” Gideon asked finally, unable to hold out any longer. He sighed when the only response he received was the quiet, even breaths of a sleeping Elijah. He stared up at the ceiling fan, noticing a reflection in the chrome accents of the city lights that lay just beyond the window.

Gideon knew he needed to sleep. His day had been long and he anticipated that the next one would be even longer. Regardless of how much he attempted to halt its activity, it was difficult to calm his brain down as it tried to wrap itself around Elijah’s out-of-the-ordinary demeanor.

“Are you asleep?” he whispered, though he already knew that he was. Biting his lip, Gideon decided to be brave, although he wasn’t sure how courageous it actually was to speak to a sleeping man. “Elijah,” he began, attempting to wrap his lips around words that seemed too big for his mouth. “I love you.”

It felt strange to admit, even though he knew it was true. Elijah gave him things that he’d never had before, and none of them had anything to do with money. He anchored him with stability, security, and love. “I love you,” Gideon repeated, thinking that it wasn’t that difficult after all. He’d said it and he felt better, lighter, like he passed a threshold of demons who had sought to keep him from moving forward.

The room was still, but he was floating, high above the internal struggles he’d unnecessarily doomed himself to. He repeated it a few more times, feeling better every time he said it, like he’d found a release he never knew he’d needed. “I really fucking love you,” he said with a yawn, letting his heavy eyelids fall.

“I love you too,” Elijah whispered sleepily, grinning up at Gideon, whose eyes shot open in response.

“Asshole,” Gideon muttered, feeling his cheeks flush warm. “I asked you if you were a’right and you didn’t answer.”

“I was sleeping. You woke me up when you said you love me.” He shrugged. “I don’t know if you realize, but I’m hyper tuned in to anytime you say ‘love.’ I’m obsessed with hearing it, even when you’re just talking about chicken nuggets.”

“Or maybe I’m not weird at all,” Gideon reasoned. After all, loving Elijah made all the sense in the world.

“Okay, Captain Confession. Go to sleep or you’re going to tell me you can’t sleep over when you’re too tired tomorrow.”

Groaning at the stupid nickname, Gideon tilted his head down to kiss his boyfriend’s forehead.

“Tell me one more time though,” Elijah requested, drawing a laugh from Gideon.

And damn did it feel good. 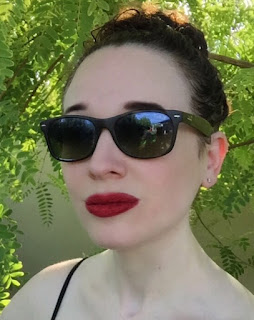 Riley has always loved to write, believing that life has the possibility to be its most beautiful when it’s portrayed on the pages of a book. Feeling the need to create and liberate in the midst of the political landscape, Riley writes novels that focus on LGBTQ protagonists, wanting to honor a community that deserves better representation depicting lives, loves and triumphs in all facets of fiction.