It's an excerpt tour and there are prizes to be won. Like? The author will be awarding a $10 Amazon or B/N GC to a randomly drawn winner via rafflecopter during the tour. How cool is that? Very. Grin. Want more chances to win? Then follow the tour! You can do that here: http://goddessfishpromotions.blogspot.com/2017/10/excerpt-tour-intimate-journeys-by-ss.html 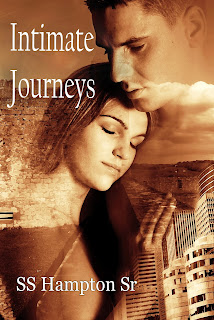 The most intimate journeys, though they are polar opposites, involve the unparalleled pleasures of sex and the inevitable unknown of death. Both are an experience unlike anything else: one is sought by everyone, while the other is avoided by everyone - for as long as they can. Sometimes these polar opposites complement each other.

Wayne Parkhurst stumbled quietly across the darkened, thickly-carpeted bedroom into the bathroom, slid the door shut, and flipped the light on. He groaned and staggered as if from a hard punch as he covered his aching eyes with shaky hands until he could brave the scorching light.

He stared in the mirror at his bloodshot eyes, noted the ragged tufts of short, sandy-brown hair sticking in all directions from his pounding head, then he realized his stomach muscles ached, and his left shoulder was burning. His eyes widened as he saw a large, finely-detailed multi-colored tattoo of a dragon-prowed ship with sail unfurled on his upper left arm. Across the sail was a laughing skull with a pirate hat against a pair of crossed skeleton bones.

“My God, what have I done,” he whispered, though he had a pretty good idea of the night’s transgressions, as he stared at the tattoo and massaged his aching muscles. What would his parents think? Or his fiancée, Missy? Or her parents? What would all of his relatives and future relatives-in-law think?

“You really don’t remember?” a soft, cheerful voice called. In the mirror, Wayne saw a small, well-formed nude woman with delicate features and long black hair leaning nonchalantly against the doorway. Her arms were folded below large tanned breasts and her dark eyes sparkled mischievously…

Stan Hampton, Sr. is a full-blood Choctaw of the Choctaw Nation of Oklahoma, a divorced grandfather to 13 grandchildren, and a published author, photographer and photojournalist. He retired in 2013 from the Nevada Army National Guard with the rank of Sergeant First Class; he previously served in the active duty Army, and the Army Individual Ready Reserve (mobilized for the Persian Gulf War). He enlisted in the Nevada Army National Guard in October 2004, after which he was mobilized for Federal active duty for almost three years. Hampton is a veteran of Operations Noble Eagle and Iraqi Freedom, with deployment to northern Kuwait and several convoy security missions into Iraq.

He has had two solo photographic exhibitions and curated a multi-media exhibit. His writings have appeared as stand-alone stories and in anthologies from Dark Opus Press, Edge Science Fiction & Fantasy, Melange Books, Musa Publishing, MuseItUp Publishing, Ravenous Romance, and in Horror Bound Magazine, The Harrow, and River Walk Journal, among others.

As of April 2014, after being in a 2-year Veterans Administration program for Homeless Veterans, Hampton is officially no longer a homeless Iraq War veteran.

In May 2014 he graduated from the College of Southern Nevada with an Associate of Applied Science Degree in Photography – Commercial Photography Emphasis. He has been studying at the University of Nevada-Las Vegas with in a double major in Art and English. He recently returned from spending a cold, rainy Spring 2017 semester studying at a university in southwestern France in the shadow of the Pyrenees Mountains.

After 16 years of desert in the American Southwest, and Southwest Asia, he still misses the Rocky Mountains, yellow aspens in the fall, running rivers, and a warm fireplace during snowy winters.
Hampton can be found at:

Great post! I really enjoyed reading it! Looking forward to checking out this book!

My apologies for running late today.

First, thank you very much for hosting this stop. I appreciate the opportunity.

And to everyone who has visited, thank you. I'm happy that you've enjoyed the excerpt from this story from "Intimate Journeys." Have a great and fun, and safe, weekend!