It's a book blast and this time it's for the book, Master Me, Please by BJ Wane. There are prizes to be won. Like?
The author will be awarding a $20 Amazon or B/N GC to a randomly drawn winner via rafflecopter during the tour. Want more chances to win? Then follow the tour. You can do that here: https://goddessfishpromotions.blogspot.com/2017/10/book-blast-master-me-please-by-bj-wayne.html

Master Me, Please
by BJ Wane 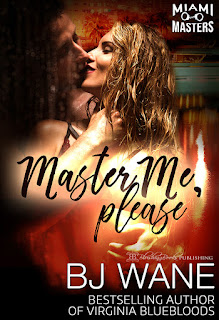 Dr. Dax Hayes fell for Krista Matthews the minute he looked into her blue eyes and saw the sated, content look she shared with her husband, Dr. Kurt Matthews. He managed to keep his feelings and lust under control until his friend and colleague asked him to join him in gifting Krista with a menage for her birthday. Knowing it was a mistake, but unable to resist, Dax succumbs to the temptation of this one-time scene, never realizing where it would lead. A year later, after sealing his fate with a questionable act, he flees on a guilt trip only to return and discover nothing had changed-he still wanted Krista Matthews with an ache that wouldn’t be assuaged by anyone else.

Unable to resist stepping in when she gets herself in trouble, Dax again gives in to temptation and aids the one woman he can never have back into the lifestyle her submissive nature needed. When a vindictive woman tells Krista the truth, will her feelings be strong enough to forgive him, or did he gamble everything only to lose it all in the end?

You had no trouble submitting to Master Dax.  That reminder got under Krista’s skin, and it didn’t help when she scanned the lot for her car and spotted Dax getting out of his.  The quick, startling stab of jealousy as she imagined him inside with someone else caught her off guard.  She’d never been plagued with that emotion before, why now?  She stood rooted in place and watched him walk straight toward her with purpose etched on his dark face instead of surprise at seeing her there.  Irritation bubbled over, eradicating her initial reaction.  Wasn’t it bad enough she couldn’t even bring herself to accept another Dom’s invitation tonight without the memory of last weekend intruding?  If he thought she’d turn around and join him in the club after the way he’d made it clear all week he wanted nothing to do with her, he had another think coming.  She may still crave dominance and thrive on submitting, but she wouldn’t be a doormat for any man to trample on.

“Fancy seeing you here, Doctor Hayes,” Krista greeted him, proud of the way she could set aside the warm flush spreading through her body with his nearness well enough to keep her voice steady.  She missed the easy rapport they shared before he left.

“I thought you realized how unsafe these clubs can be for a woman alone?”  The rebuke, stated in his deep, firm voice made her square her shoulders and curse the compulsion to sink to her knees in apology for displeasing him.  It was yet another sign she’d waited too long to get her act together.

“It was never a problem before, I mean, before I met Kurt,” she clarified so he’d know she’d played before her marriage.  “Enjoy your evening, Doctor.”

“Cut the crap, Krista,” Dax snapped, his frustration evident in the way he tunneled those long fingers through his ink-black hair and his green eyes glittered with that undefinable emotion she didn’t understand.

“I’m not the one who asked for a different surgeon to assist, Dr. Hayes.  Now, if you’ll excuse me, I’d like to get home.”

“Wait.”  The hand he laid on her upper arm burned her skin, her automatic halt at his command heated her face and the ripple of longing going through her head left her deflated.  It seemed she couldn’t win with him.

“Let’s talk.  Are you familiar with Casey’s diner?”

The invitation took Krista by surprise and she sucked in a breath as hope dashed away the remnants of her annoyance with him.  If he wanted to be just friends, she’d take it.  It would be better than the cool indifference he’d shown her the past few days.  “Anyone who’s been out past 2:00 am on a weekend night has been to Casey’s.”  The all-night diner boasted the best pie on this side of Miami.

Since he was making an effort, so would she, Krista decided.  What could it hurt?  “Okay.  See you there.”  Stepping around him, she hastened to her car before common sense told her she was making a mistake and setting herself up to get hurt again.  Since when did common sense have anything to do with her desires?

Thank you for hosting me today.