It's a book blast and today I'm featuring Desiree Holt's Hide and Seek. There are prizes to be won, and they are awesome prizes, so be sure to enter. What's up for grabs? Desiree will be awarding a Kindle Fire 7 with Alexa to a randomly drawn winner via rafflecopter during the tour. How cool is that? Want more chances to win? Then follow the tour. You can do that here: https://goddessfishpromotions.blogspot.com/2017/08/book-blast-hide-and-seek-by-desiree-holt.html

Hide and Seek
by Desiree Holt

Anything can happen when you let your guard down . . . 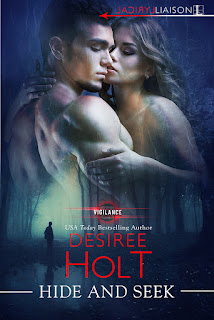 After receiving a violent threat on the heels of her father’s disappearance from the town of Arrowhead Bay, Devon Cole fears for her life—until Vigilance, a local private security agency, steps in to shield her from danger. Although she isn’t usually quick to surrender her freedom, she has no problem stripping her defenses for her new sexy bodyguard . . .

Tortured by the painful memory of lost love, Logan Malik is determined not to fall for a client again. So when he’s tasked with watching over Devon day and night, he’s focused on doing his job. Day is no problem, but as tensions rise at night, nothing can protect them from giving in to unbridled passion . . .

“And we’re working on the backgrounds of the Cole International execs. Do you have everything there you need?”

Logan had his own personal weapons with him—a Glock 19, a Ruger LCP and his Kabar knife—but on the remote chance of an invasion he wanted to be covered on all fronts.

“More firepower. I’ll text you the list as soon as I hang up. How are you coming with the phone?”

“We’ve just gotten started with it. First of all, it’s not an ordinary cell phone. It’s made by a company like the one that makes ours.”

“So it’s ten times as hard to crack.”

“That’s right. We got past the factory restore and there’s data on it, but it also seems to have multiple passwords.”

Logan snorted. “Can you say paranoid? Now I’m sure there’s shit on it we need.”

“I’ve got Del on it. He’s got it hooked up to a bunch of different programs at the same time. If anyone can break it, that would be him.”

“Ginger’s been digging into Graham Cole with an electronic shovel. I want to know everything from the past ten years, personal and corporate. There’s a clue somewhere and I mean for us to find it. I’ll bet we find a lot of unpleasant crap there.

“I hope we find something soon,” he told her. “I don’t think they’re near done with her.”

Michigan with double majors in English and History, her earlier careers include agent and manager in the music industry, public television, associate vice president of university advancement, public relations, and economic development.

She has been featured on CBS Sunday Morning and in The Village Voice, The Daily Beast,
USA Today, The (London) Daily Mail, The New Delhi Times, The Huffington Post and numerous other national and international publications. She is also the Authors After Dark 2014 Author of the Year.

“Desiree Holt is the most amazing erotica author of our time and each story is more fulfilling then the last.” (Romance Junkies)

Learn more about her and read her novels here:

Wendi, thanks so very much for hosting me.