It's a book blast and there are prizes to be won. Like? The author will be giving away a $10 gift card to amazon or Barnes and Noble. Sounds good, doesn't it? Want more chances to win? Then follow the tour. You can do that here: https://goddessfishpromotions.blogspot.com/2017/08/book-blast-lawmans-apache-moon-by-debra.html 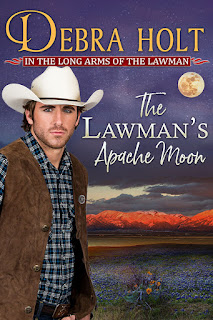 “No more detours!” That was the promise Angelina Lord made to herself when she accepted a ride from a wedding in Texas, with the best man to her destination in Santa Fe, New Mexico. What could possibly go wrong?

Angelina is focused on one thing–opening a fashion boutique in Santa Fe. What she really doesn’t need is one full-of-himself lawman with his aggravating air of superiority and soul-searing eyes…not to mention heart-stopping kisses…coming to her rescue. If she lets him get too close to the truth, he could bring down the wall she erected around her well-ordered life and her heart.

United States Marshal Jace Blackhawke holds family and traditions as the center of his life. He isn’t part of Angie’s world and she certainly isn’t part of his. Will their differences prove to be too insurmountable in the face of the truth that will not stay silent?

“Nice morning.” He sent the words across to her, his eyes drawn in and owned by the pair of emerald green ones that danced and dazzled and demanded his attention. Cat eyes? Eyes that held a mysterious pull on his with their feline shape, brilliance, and shielded in a black nest of lashes where secrets could hide.

“If you say so. Bit cold… and flat.” The voice matched her… smooth and feline and flat-out intoxicating.

Damn. Was the air thinner here? His normal thinking was all out of whack. He made no reply just kept a stone-faced countenance while his mind tried to pry itself loose from whatever strange hold this newcomer exerted. The quarreling couple held no interest for him. With his eyes concealed behind a pair of aviator lenses, he felt his gaze drawn again to the woman.

Born and raised in the Lone Star state of Texas, Debra grew up among horses, cowboys, wide open spaces, and real Texas Rangers.  Pride in her state and ancestry knows no bounds and it is these heroes and heroines she loves to write about the most.  She also draws upon a variety of life experiences including working with abused children, caring for baby animals at a major zoo, and planning high-end weddings (ah, romance!).

When she isn’t busy writing about tall Texans and feisty heroines, she can be found cheering on her Texas Tech Red Raiders, or heading off on another cruise adventure.  She read her first romance...Janet Dailey's Fiesta San Antonio, over thirty years ago and became hooked on the genre. Writing contemporary romances, is both her passion and dream come true, and she hopes her books will bring smiles...and sighs...to all who believe in happily-ever-after’s.

As Debra Holt's assistant I'd like to reach out to you on her behalf and thank you for hosting!

Thank you for hosting my book today on your site. I appreciate all you do for authors and readers!

Who is your favorite literary character? Thanks for the giveaway. I hope that I win. Bernie W BWallace1980(at)hotmail(d0t)com

Thank you for the engaging post and good luck on your book tour!