It's a book blast and there are prizes to be won. What book? A Crazy Reunion by Cate Baylor. What's up for grabs? Cate will be awarding a (For US residents only) silver necklace that says "this isn't my first rodeo" via rafflecopter during the tour. For a non-US winner, Cate will offer a $15 Amazon or B&N gift card. Want more chances to win? Then follow the tour. You can do that right here: http://goddessfishpromotions.blogspot.com/2016/12/book-blast-crazy-reunion-by-cate-baylor.html

A Crazy Reunion: Book 2 in the Crazy, Texas series
by Cate Baylor

Raney Hoffman eloped with her high school sweetheart believing they’d found their happy ever after, 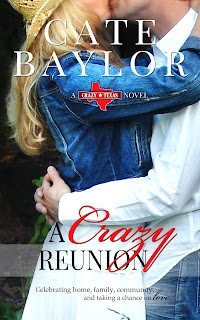 but her world crashed down around her when he left after less than two years of marriage. Nearly twenty years later he’s back in town. Her broken heart tells her she should still hate the jerk. But her traitorous body surges into sexual overdrive at the sight of him.

Rob Coleman was devoted to Raney the moment they met in high school. After they married, his twin brother died unexpectedly and Rob’s grief thrust him into an identity crisis he couldn’t recover from. The decisions he made in that haze of grief have haunted him for nearly twenty years. Now he’s back and completely befuddled by the strength of his response to seeing Raney again.

They rebuilt their lives without the other but their unexpected reunion makes it clear their history is far from resolved.

“No.” She cut him off with a short gesture of her hand. “We can’t… You can’t keep doing this to me.”

He tried to get her to look him in the eye, but she just kept pushing him away as he was trying to pull her closer. He needed to know she felt it, too, but with each word and push, he felt that hope slipping away.

“Raney.” He hated the pleading in his tone but was powerless to stop it. “I know you feel this, too.”

Finally she met his gaze and the deep sadness in her eyes made him feel hollowed out. He squeezed her shoulders, only wanting to make that sadness go away, but she pushed him back again.

“Rob, no! I mean it. You can’t keep…tangling me up like this. No more.” And with that she let her hands drop from his chest and stepped away.

Then a man stepped between them, pushing him away from her even further. He registered the flashing eyes and clenched fists of Jordan, and braced himself.

Even in the daze she created when she was around him, Rob realized he’d blundered. It was a dude code that you never poached on another guy’s date. He’d done just that and was about to pay the price.

Cate Baylor has been a technical communicator for over fifteen years. When she's not writing, she suffers from hobby 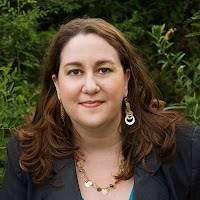 addiction, which includes (but is not limited to!) reading, card making, crochet, knitting, scrapbooking, cross stitching, and home DIY. She lives in Houston with her geeky husband, neurotic cats, and precocious Yellow Lab named Tex. She comes from a long line of German-Texan farmers who are likely rolling over in their graves knowing she’d much rather stay blissfully air-conditioned than suffer the Texas heat.