It's time for a book blast and this time I'm featuring I, Erogenous Jones by Candy Caine. You'll want to keep reading. There are prizes to be won. Like? Candy will be awarding a Hot pink beach tote bag (US ONLY) to a randomly drawn winner via rafflecopter during the tour. Want more chances to win? Then you'll want to follow the tour. You can do that here: http://goddessfishpromotions.blogspot.com/2016/12/book-blast-i-erogenous-jones-by-candy.html

I, Erogenous Jones: (The Life and Loves of Ariel Jones. Vol 1)
by Candy Caine

Sometimes Ariel Jones' sexual adventures get her into trouble. Real trouble. But she determines to 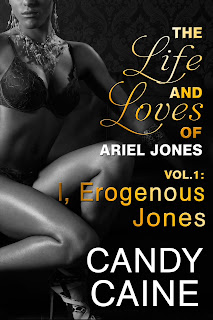 just chalk this up to experience and move on down the road to the next adventure. She will not be tied down by marriage. Too much heartache. Too little freedom. But when she meets her match, she has to reassess. Because he's to die for and he's got his own agenda.

“It’s true you know, and I had to confess,” he said, “you are such a beautiful woman.”

I could feel the heat rising into my face as his words made me feel a little uncomfortable. It should be Ray sitting with me and telling me that.

“I just love looking at you.”

I took another long sip of my wine, wishing the piano player would return. I felt guiltier and guiltier the longer I sat there. He did a few minutes later and I had just about drained my glass. The pianist began to play romantic songs and a few couples got up to dance.

Jozef took my hand in his. “Come. Now we dance.”

He led me to the dance floor and held me close. I could feel the heat from his body, which pleasantly warmed mine. The scent of his aftershave was pleasing, as well. We moved slowly to the music as he nuzzled my neck. I knew this was wrong and tried to rationalize my actions, but found it hard to string my thoughts together. I had my eyes closed for several moments while we danced, but when I opened them, the things around us began to go in and out of focus. I wondered if I’d downed the wine too quickly and it went to my head. I tried to talk, but had problems forming the words. Despite that, Jozef smiled and we continued to dance a little longer. However, when I could no longer follow him and began to trip over his feet, he said, “Time to leave.”

Whether she’s writing a short story or novel, Candy Caine will make her interracial romances hot and spicy. Always striving to

entertain her readers, Candy tries to breathe life into her characters by running them past her husband, Robert--which often makes life interesting in their new home in Arizona.

Candy loves to hear from her readers. You can reach her at candy@candycaine.com.

Visit her website at www.candycaine.com and find her books on Amazon, B&N,