Blurb Blitz ~ under your skin by Shannyn Schoroeder

It's a blurb blitz tour and I'm featuring Shannyn Schoroeder's book, under your skin. Check it out! You'll want to comment. Shannyn will be awarding a print copy of Under Your Skin (US/Canada only) to a randomly drawn winner via rafflecopter during the tour. Very cool, isn't it? Want more chances to win? Follow the door here: http://goddessfishpromotions.blogspot.com/2016/06/blurb-blitz-under-your-skin-by-shannyn.html

Under Your Skin
by Shannyn Schoroeder 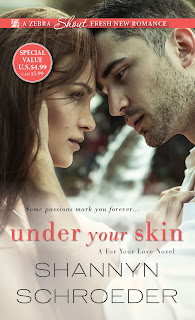 BLOOD IS THICKER THAN INK…

Norah O'Malley has been alone for a long time. It’s been ten years since her father and four brothers shipped her off to be raised by her aunt. Seven months since she's seen the guy who got her pregnant—who still doesn’t know. And it’s two weeks since she came home to Chicago and discovered none of her family wants to talk—or listen.

She never expected to walk into a tattoo shop seven months pregnant and get her socks knocked off by instant attraction. She can’t even see her socks. But Kai Ellis is big and gruff and sexy as hell, and if he has a past, well, so does she. Even more, Kai knows how to listen so that Norah feels just a little less alone . . .

All the chemistry in the world can’t help Norah make her decisions. And no sizzle of desire will make Kai believe in happy endings. But a little time with someone who understands might just change everything . . .

Want an excerpt? Here you go:

Norah O’Malley woke like she had every day for the past two weeks: lying in her brother’s bed, in her father’s house, rubbing her pregnant belly like it was a Magic 8 Ball that held some mystical answers for her fucked up life. Her bladder was full to bursting, another perpetual condition these days. Struggling to sit up, she shifted to get to the bathroom. This was not how she expected her life to look at twenty-two.

After taking care of business, she studied herself in the mirror. Did she look different? Of course from the chest down her body was no longer hers and hadn’t been for some time. Her face looked the same though. Right? She pressed closer to the mirror, propping her belly on the sink. What would Avery see if they met today?

Her older brother Jimmy had been pressuring her since she came home weeks ago to call Avery and tell him she was pregnant. She knew she had to and it had been crappy of her to keep this from him, but she knew Avery. He’d want to take care of her. He was that kind of guy. She could definitely appreciate such nobility in the hero of a book or movie, but in real life, choices like this sucked.

She wasn’t sure she was ready to be a mom. Old stirrings of Catholic guilt hit her—years of parochial school had that effect—but she couldn’t imagine trapping them when they weren’t ready. She shuffled back to bed and sat on the edge. Every time she thought about Avery, her stomach fluttered. Her short time with him had been magical. She’d never felt so loved by any other boyfriend she’d had. Part of her wanted him to be with her through this. A huge part.

Another part was afraid of disrupting his life. She’d dodged his calls all summer, not knowing what to say. He was looking for summer fun, but fun ended for her at the sight of two pink lines.

And now she was afraid of her brothers’ reactions. They didn’t handle news of her pregnancy well. They would threaten to go after Avery again. If nothing else, she needed to protect him until she figured out what she wanted.

The baby kicked her now empty bladder and elbowed her ribs. Must be breakfast time. She crept downstairs hoping to avoid running into her brothers, especially Tommy. Tommy was nearest in age to her and they’d always been close growing up, even after Jimmy had shipped her off to live with Aunt Bridget in Boston. Tommy had come to visit her often and called her a few times each week. They had always been more friends than siblings.

She’d expected Jimmy, Kevin, and Sean to blow up when they found out she was pregnant. Telling them over the phone probably would’ve been better than just showing up on their doorstep six months pregnant. But Tommy was supposed to be on her side. He’d raged the night she came home and the anger had been at a slow burn since. He barely spoke to her. His first and only question was always: Who is he?

Avery didn’t deserve to be on the receiving end of that wrath. The guy had done nothing wrong.

Shannyn Schroeder is a former high school and middle school English teacher. She holds a

BA in English and MAs in Special Education and Gifted Education. She currently works as an editor for an education company and juggles writing around her kids’ schedules. In her spare time, Shannyn loves to bake and watches far too much TV, especially cop shows. She started her first book on a dare from her husband and has never looked back. She came to reading romance later than many, but lives for the happy ending, and writes contemporary romance because she enjoys the adventure of new love. Readers can visit Shannyn online at www.shannynschroeder.com and follow her on Twitter @SSchroeder_.