EXCERPT TOUR ~ Sonar the Cyclone by B Truly

It's a  and the prizes are for you. Not only will you find a great read, but you could win! What could you win? B. Truly will be awarding a $15 Amazon GC plus Swag: 1 Sonar The Cyclone e-book, 1 Sonar The Cyclone Photo Magnet and 1 Sonar pen to a randomly drawn winner via rafflecopter. How cool is that? Want more chances to win? Follow the tour here: http://goddessfishpromotions.blogspot.com/2015/11/excerpt-tour-sonar-cyclone-by-b-truly.html

Sonar the Cyclone
by B. Truly

Is your destiny determined by what the future has foretold? Or is fate deemed in the hands of what you behold?

The Royal 4 are now back on their home territory of Nazari, determined to get things back to normal. Syira’s forbidden love is being held captive. She is hell-bent on fighting for him despite the immense obstacles. She must find a way to convince her race that Kadeem is not dangerous. Their threat lies from deeper within.

Shiray has accepted her past and is moving forward with her life, but it comes back to haunt her tenfold. That all changes when she stumbles across the truth. Now, she must pick up the pieces of her shattered life. 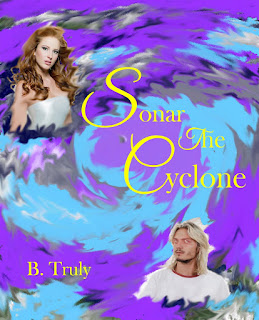 They are in the calm but know when they approach the dirty side of the Cyclone storm, terrible things will unravel. The future is revealed and they get a glimpse of Fate’s course. Time is not on their side. They must attempt to change their destiny or their world will be doomed.

My voice is hoarse at this point from screaming. My heart feels numb staring at my dead little brother. But there’s a deafening bang in the other direction. I run toward the sound and come across King Zeus fighting against Kadeem, Platinum bob, and me. What in Sonar’s going on here! How can I see my own self? It’s bizarre, but I watch my other self in action. Platinum bob delivers pain to Kadeem and me. Kadeem tries to resist and my other self-drops to one knee but manages to throw a force field over them. Kadeem begins brawling with both of them. My other self-rises to my feet, pulling a laser gun out of my boot. I’m about to shoot King Zeus, when another male Polar somehow intercedes my force shield. Then he grabs me by the neck and throws me down. Platinum bob hurls pain at Kadeem. His blood vessels are pulsating from his neck. The male Polar must be blocking my power because I watch helpless, unable to access them. Zeus has a small blade in his hand. He strolls over to Kadeem, who is on his knees, and plants the blade swiftly into his heart. Kadeem gasps, taking sharp breaths, trying to take the blade out. The knife is in too deep and has done too much damage. The golden glow around his honey irises diminishes and he falls over. My other self cannot defeat the male Polar’s shield block, so I’m on the ground in agony, struggling against platinum bob’s grasp.

I am in excruciating turmoil after witnessing Kadeem’s death. My surroundings begin to spin and everything disappears.

accomplished this dream. She has very vivid dreams and a wild imagination. She likes to read, watch tons of TV shows, and movies. She is addicted to romance and gets a thrill out of action and suspense. She writes New Adult, Fantasy, Sci-fi, and Paranormal-Romance.

In the Sonar series, B Truly said, “It was fun to explore different elements of Sci-fi romance and create various realms of powers for my characters. I want to show my readers that Sci-fi can be fun, but also traumatic. I hope you guys enjoy the Sonar Series.”

B Truly has three wonderful children and a husband who defines the person she is today. She works full-time as an Ultrasound technologist in Sugarland, Texas.

I'm looking forward to reading this one - thanks for sharing :)

I really enjoyed the excerpt, thank you for sharing! This has been a terrific book tour and good luck to you!

Thank you for hosting the tour.