Check out Calm Before the Storm by Cara Lake! Out now! 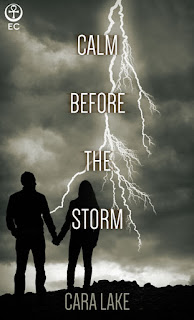 In a world on the brink of chaos, only two people can balance opposing forces and restore order to the universe. To do so, the two must forge an intimate bond. Unfortunately, they’re complete opposites who are unaware of their powers—and of the consequences if they fail to unite.
A lawyer with good reason to abhor violence, Irina is wary of her new client, a famous boxer accused of murder. As a street orphan, Tyr learned to fight for survival and trust no one. Despite their differences, the two find themselves irresistibly drawn to each other.
With secret forces working both for and against their alliance, Tyr and Irina find themselves on a journey fraught with danger, betrayal and overwhelming desire. Ultimately the fate of billions rests in the hands and hearts of two lost souls who must overcome their fears and learn to trust each other.
Reader Advisory: This story has graphic sexual language and scenes—no closed bedroom doors (or other rooms) here!
A Romantica® urban fantasy erotic romance from Ellora’s Cave

The corporate box had been exactly as Irina expected, full of deathly boring egos and bad chat-up lines, most of the guests more interested in the sound of their own voices than watching the early bouts. Irina had been grateful for the distraction and very happy to follow him when Luc suggested getting nearer to the action. Mainly to get away from the corporate suck-ups, she told herself, not to get closer to the fight and…him.
Needing little encouragement, even from Cassi who had practically insisted they go off together, Irina followed her flatmate, chewing her lip nervously. Luc being Luc pushed a way for them both through the rowdy spectators, the passes provided by her boss working their magic. A sudden roar as the crowd bellowed loudly, and Irina’s ears were assaulted by a frenzy of cheering, shouts and whistling as the two main protagonists emerged from the tunnel to her right. Both men were hooded, but Irina immediately felt the buzz of barely contained energy that emanated from the figure closest to her in red as he tracked a path to the ring.
And then he was there. Close enough to touch. A whisper away.
His head swung to the left as he passed by, a freeze frame moment, two dark eyes locking on to hers, dragging them both into a vortex, that dark, still space of existence. A gaping black hole opened up before her. Time and the whole of eternity stood still. The space around them dissolved and Irina found her gaze snared by twin black holes that widened for a split second beneath slashing ebony brows. As they expanded, she experienced a wild rush of adrenaline, her body spiralling into freefall, the compulsion to simply lose herself in the darkness of his eyes, so overwhelming she was paralyzed by it. His head turned, jostled by the ocean of the crowd. The connection broke and Irina was left shaking, deafened by the sudden barrage of sound and crushed by a devastating sense of loss.
Trembling, Irina grabbed on to Luc who steadied her with strong arms but was too busy cheering to notice her reaction. The rest of the fight was a complete blur. Irina glimpsed snippets through a red haze of noise and motion. The fighters in the ring, the hustle of coaches and trainers, the referee trying to keep them apart before the bell sounded, the surge of battle, fists flying, a block, a jab, a flurry of uppercuts, bones cracking with the force of impact.
Blood. Guts. Sweat. Everything she hated. Violence. Rage. Anger.


The thump of bone onto canvas and the racing of her heart pounding as an arm punched the air in victory. Her one overriding memory at the end of the night, the jubilant face of the man who haunted her dreams and nightmares, triumphant in all his bloodstained glory.

Cara Lake has always loved fantasy, romance, adventure and all things mythical and magical.
Her urban fantasy world is populated with fantastical creatures, exotic landscapes and set in a universe on the verge of destruction. Cara loves creating sticky situations for her kickass heroines to enjoy passionate encounters with hot, alpha males. The universe of her first book Calm Before the Storm is infinite and full of sexy soul mates on a collision course with fate and destiny. The second book in the series, Rage to Adore is coming January 13th 2016.
Cara enjoyed writing Mistletoe Kisses and has plans for other employees of the Fosters Ad Agency.
Website
http://caralakeromance.com
Facebook
https://www.facebook.com/caralakeauthor/?ref=hl
Twitter
https://twitter.com/CaraLakeRomance
Posted by Wendi Zwaduk and Megan Slayer at 7:25 AM

Thanks for featuring Calm Before the Storm, Wendi!