It's a super book blast and I'm featuring Midnight Supper at the Rise & Shine. You'll want to comment. There's stuff you can win! There's a $25 gift card to either Amazon or BN up for grabs, so go forth and comment!

MIDNIGHT SUPPER AT THE RISE AND SHINE
by Tara 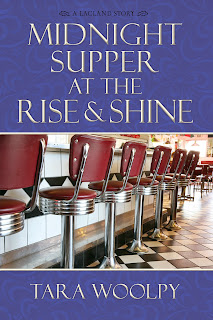 Bad luck and worse choices—that’s Irene. She’s been a widow half her life and now splits her time between waitressing at the Rise and Shine café and singing in an oldies cover band. And she’s having an affair with a married man—something that even her eclectic, super liberal family can’t condone.

She’d be the first one to admit she has faults, but she’s not a bigot. The genetic pool in her nuclear family spans the globe. And it’s not that she’s prejudiced against people with disabilities but that doctors and wheelchairs give her the heebie-jeebies. So when a cute guy in a chair keeps showing up in the restaurant, she’s clumsy, awkward and strangely drawn. Can Irene let go of the past or is she too emotionally broken to find a future worth the risk?
~~~~~~~~~~~~~

And now for an excerpt:
The counter guy took a sip of his coffee. He turned to Mama. “It’s like the goddamned UN in here, a chink fag waiter and some spic in the kitchen.” He gave a wheezing laugh.

My stomach dropped. Mama gave me a look. Then she focused on him and exaggerated her Castilian accent. “What are you saying about my family?”

“Lighten up. I was making a joke.” From twenty feet away I could see the flare in his nostrils. “How was I to know you’d take it bad? You look white.” He backed away, fumbling in his back pocket for his wallet. Throwing a couple of bills on the counter, he bolted.

I picked up the money and smoothed it out. “On top of that, he shorted us a quarter.”

Mama reached over and plucked his jacket from the back of the stool. She held it so I could see the confederate flag stitched on the back. “And he left his trash.”

There was a squeak of wheels, and Mark rolled up, his dog beside him. He was smiling. “We’ll take it to him. You’re not the first person to get scared by Tuk.”

Jesus, he had nice eyes.

Tara Woolpy is the author of The Lacland series, loosely linked novels set in the fictional upper 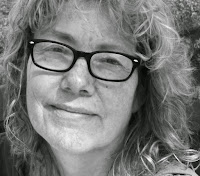 midwestern town of Lacland, including Releasing Gillian's Wolves, Raising Wild Ginger and Midnight Supper at the Rise and Shine. Tara earned her bachelor’s degree in English Literature from Whitworth College after which she spent a year at the Women Writers Center in Cazenovia, New York. While pursuing her writing career she paid the rent through an astonishing number of jobs—she’s been a waitress, a shop owner, a retail clerk, a half-way house counselor and a commercial diver. Eventually, she took a midlife hiatus from writing to become an aquatic scientist. As such she also holds a Masters degree from Oregon State University and a Ph.D. from the University of Wisconsin-Madison. Now she teaches online for the University of Wisconsin-Green Bay and has come back to writing fiction with new passion and wonder at the long, serpentine beauty of life. In addition to the novels, her work has appeared in Focus, Corymb, Kalliope, Alligator Juniper and the anthology The Things that Divide Us from Seal Press.