Super Book Blast ~ Fairest of the Faire by Susabelle Kelmer

It's a super book blast and the prizes are for you! How so? The author is awarding a $10 Amazon/BN GC to a randomly drawn commenter via Rafflecopter. Be sure to enter to win. You can follow the tour here. The more you enter, the better your chances. :-) Here's the link for the tour: http://goddessfishpromotions.blogspot.com/2015/05/book-blast-fairest-of-faire-by.html

Fairest of the Faire by Susabelle Kelmer 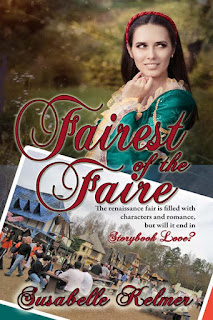 The renaissance fair is filled with characters and romance, but will it end in storybook love?

Schoolteacher Connie Meyers is suddenly a young widow, her husband killed in a horrific car accident. Heartbroken to find out he had gambled away everything they had, she moves to her sister-in-law's Midwest home to rebuild her life. A trip to the local Renaissance Faire with her nieces leads to a summer job as a costumed storyteller.

Avowed bad boy and fair performer Gage Younglood is infatuated with Connie at first sight. Despite his deliberately commitment-free life, and Connie's don't-touch-me attitude, he soon has her in his arms, realizing quickly she is also in his heart.

When she is threatened by her late husband's bookie, he steps into the role of protector, his fate forever sealed with hers.

Excerpt:
“Who said anything about a relationship?” he said, standing up so he could tower over her again. “I’m just trying to have a little fun. You know, fun?”
If he’d been an animal, she was sure he’d have had hair raised on the back of his neck, he seemed so angry, and it struck her painfully. She hadn’t wanted to anger him or hurt him. She turned away from him and closed her eyes to tamp down the tears she knew would come if she let them. She crossed her arms over her chest, to hold in the pain. Being tired made her much too vulnerable.
“Yes,” she finally said. “I know about fun. Life isn’t always fun, though.”
“Princess.” His voice was soft, tender. “I won’t hurt you. It’s not in my plan.”
Despite herself, she felt the shivers of desire race down from her shoulders, down her arms and legs, and back up to that secret, soft place at her core. She bowed her head and gritted her teeth, hoping for the feeling to go away.
“And what is your plan, Gage?”
“It’s a simple plan. I want you to feel good. I want to feel good, too.”

Susabelle Kelmer is a wife and mother living at the base of the Rocky Mountains in northern Colorado. She believes in romance, second chances, and the magic of moonlight. When she isn't writing, she works with students with disabilities in the college environment. http://www.susabelle.com
Susabelle’s tagline: Love is Everything.

Thank you so much for hosting me today! This book was completely a work of love, and I am happy to be able to share it with the world!