Getting Up Close and Personal … with Captain Rob

Thanks Wendi for inviting me over here today to share a snippet from Right of Salvage, my story in the Jolly Rogered collection. If you want to get your hands on the whole thing – and who wouldn’t fancy getting to grips with the hot and oh-so-sexy Captain Rob Hawke? – you can find him swashing his buckle in the Totally Bound book boutique. The Jolly Rogered collection is available now on early download, and will be on general release from 11 July.
Knowing the sort of hot gossip we all like to keep abreast of, I tracked down Captain Hawke and fired a few finely honed pirate-friendly questions at him. All in the name of research obviously. Here’s what he had to say for himself…

Me: Captain Hawke, thank you for agreeing to chat. I know you must be very busy, doubloons to bury, that sort of thing…
Captain Hawke : Are you taking the piss, Ms Barker?
Me: No, of course not. Perish the thought. I’m just glad to see you.
Captain Hawke: That’s alright then. And, it’s just Rob these days.
Me: Right, thanks. Er, shall we start with a little background? Where do you keep your parrot?
Rob: My what? Do you see a parrot round here, Ms Barker? And I thought I’d warned you about piss-taking.
Me: No parrot?
Rob: Not currently. I did have one once. He shared your passion for living dangerously. He used to squawk ‘Kneel!” in the middle of the night. It all became quite disconcerting for any companion I might have staying. He had to go.
Me: What happened to him?
Rob: I was going to eat him but he flew away. They do that sort of thing.
Me: I see. Sounds like a sensible bird. Now, I’m sure our readers would be interested to know a little bit about your life before you took up piracy. Pirates are bad lads, we all know that. But what was the naughtiest thing you ever got up to as a boy?
Rob: I was a sweet little lad. Very biddable. Mostly. Of course there was that time I was practicing with my father’s broadsword and managed to drop it in the privy. It ended up in the moat outside our castle. I didn’t sit down for a week after that.
Me: A moat. Wow. Moving on, we know what Jane thought of you when you first met. It’s in the story. But what was your first impression of her?
Rob: Ah, a serious question at last. I thought she was absolutely bloody gorgeous. Of course, I’d no intention at first of abducting her, that just sort of happened and I prefer to think of it as a rescue rather than kidnapping. She seemed… vulnerable and I wanted to protect her. I was also pretty keen to get my hands on her bare arse too. I was not disappointed.
Me: What’s Jane’s worst habit? Does she do anything that annoys you?
Rob: She argues. I don’t usually allow that, but Jane does seem to get away with things.
Me: Okay. And what would you say is her finest quality?
Rob: Have I mentioned her arse? That’s pretty fine. Oh, I see that wasn’t what you had in mind. I think I most appreciate her courage, and perhaps her loyalty. Ours has been a dangerous, difficult life and she never complains. Oh, and there is her arse, naturally.
Me: Here’s another serious question. If you could meet anyone in the world, dead or alive, what would you say to them?
Rob: Christopher Columbus. That guy had some bottle. I know for sure I’m not going to sail off the end of the earth. He only thought he wouldn’t. Probably.
Me: Do you have any phobias or pet hates?
Rob: Crocodiles. Can’t stand the bloody things
Me What’s the best place you’ve ever been to, and why did you like it?
Rob: I’ve travelled a lot, seen a lot of fabulous, exotic places, but in my opinion there’s nowhere to compare with England in the winter. Crisp snow, ice skating, a roaring log fire in my father’s great hall. I miss all that.
Me: One final question, if I may? Where’s your preferred place to bury your treasure?
Rob: Ms Barker, are you being suggestive?
Me: No, it’s a serious question.
Rob: Bollocks, it is not. And I refuse to answer it on the grounds that Jane would have my hide. Where I choose to bury my treasure is strictly between me and her.
Me: How gallant. A chivalrous buccaneer. It’s been nice chatting, thank you for agreeing to see me
Rob: My pleasure.
Me: Before you rush off, we’ve been running a little quiz about pirates, to test your knowledge. Would you like to have a try? You could win an ebook.
Rob: A what?
Me: Er, right. Perhaps not.

Captain Rob Hawke might not have much use for an ebook, but if you want to test your knowledge of pirates and enter our prize draw to possibly win all four stories from the Jolly Rogered collection, you can find the quiz here.

https://www.surveymonkey.com/s/WTCWN8F
Go on, have a go.

Here’s the blurb for Right of Salvage… 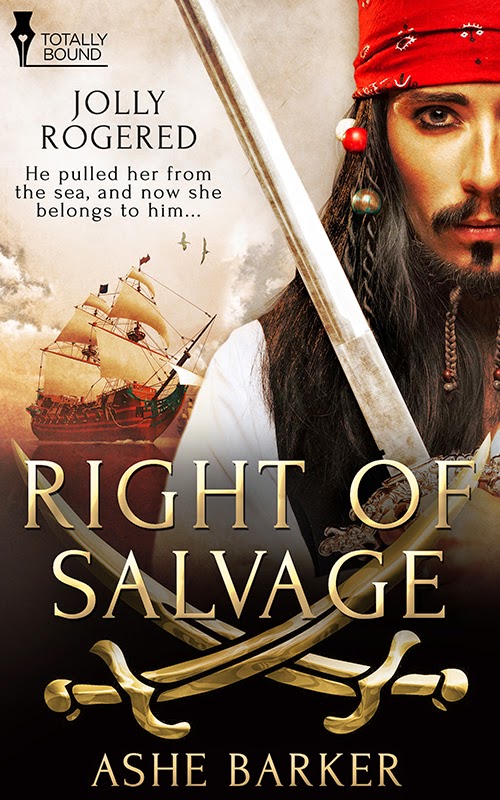 He pulled her from the sea, breathed life back into her, and now she belongs to him. By right of salvage.
A passenger on a merchant ship carrying her husband’s cargo between the New world and Portsmouth, Jane Browne is unprepared for the devastating attraction she feels towards the fierce pirate who decides to relieve her husband of his goods. And his wife. Hurled into the sea by her violent husband in an act of spiteful, jealous revenge, Jane is rescued by the handsome pirate captain, who declares that she is now his property.

Jane has no choice but to accompany Captain Rob Hawke. Installed on his ship and in his bed he demands her total obedience and her willing submission. Frightened and alone, Jane nevertheless responds quickly to her pirate rescuer’s delicate seduction, as he draws her effortlessly into his world of pleasure tinged with pain. Having sampled what he can provide, when Rob offers Jane a choice, will she opt to accept her freedom, or remain with Rob as his willing submissive?

When Rob’s past and Jane’s jealous husband catch up with them again, can they find a new future - together?

Buy Links:
You can get your hands on Right of Salvage right now from Totally Bound, and after 11 July it will be in all the usual places: Amazon.co.uk  Amazon.com  Totally Bound  Barnes and Noble  All Romance
And don’t forget to visit the other Jolly Rogered authors and get to know the rest of the swashbuckling heroes from the collection.
Temptation Released, Ayla Ruse
Ruined By The Pirate, Wendi Zwaduk
The Running Game, Meg Harding

Check out our Facebook party to celebrate the release of the collection, right here: https://www.facebook.com/events/1435843353343133/?fref=ts
The party starts on July 15th!

In my own writing I tend to draw on settings and anecdotes from my own experience to lend colour, detail and realism to my plots and characters. An incident here, a chance remark there, a bizarre event or quirky character, any of these can spark a story idea. But ultimately my tales of love, challenge, resilience and compassion are the conjurings of my own lurid and smutty imagination.

When not writing – which is not very often these days - my time is divided between my role as resident taxi driver for my teenage daughter, and caring for a menagerie of dogs, rabbits, tortoises.  And most recently a very grumpy cockatiel.  I’m a rural parish councillor, and I’m passionate about evolving rural traditions and values to suit twenty first century lifestyles.

I write for Totally Bound and now have about a dozen titles on general release, with several more in the pipeline. I have a pile of story ideas still to work through, and keep thinking of new ones at the most unlikely moments, so you can expect to see a lot more from me.

I love to hear from readers. You can find me on my blog, and on the Totally Bound site. I’m on Facebook, and twitter. I’m on Pinterest too, and Goodreads
Posted by Wendi Zwaduk and Megan Slayer at 12:00 AM

The 'interview' was so funny! Just what I needed to brighten my day, can't wait to read the book!
Noelle