Character Interview with Killian Thomas from Ruined by the Pirate!

Have you ever wanted to talk to a pirate? Wanted to get into his head a bit and walk around? Well, here's your chance. I've snagged Killian Thomas, pirate, for your pleasure!

As a boy, oh, I don’t know. I knew how to charm the ladies from a young age and could figure out how to get out of a jam pretty easily.

3.       In your own words, tell us what your first impression was when you met Sarah. Did you hit it off right away?

We didn’t hit it off, not at all. I stole her from her yacht. She wasn’t terribly appreciative. She tried to hit me. I didn’t mind, quite frankly. A good roll with her has been fun. I’d give you more details, but even a dirty pirate doesn’t tell all his secrets.

Now is that a proper question for a pirate? If I told you where I buried it—or would like to—then all of the world would be out hunting for it.

5.       You’ve sailed the high seas for a good while now. What is the best place you’ve ever been to and why do you like it?

Anywhere my Sarah happens to be is good enough for me. I’m not terribly particular.

In most cases, I’d say the ship is the thing. I love my vessels—whichever one I happen to be sailing. But if Sarah is thrown into the mix, then I’d take her on my ship.

Handsome, suave, dangerous, unpredictable, sexy
I don’t have much restraint, now, do I?

8.       Did you have any serious relationships before Sarah? If so, what happened? How did you break up?

I did. I was very much in love with a woman, but she didn’t love me. We split because she thought I didn’t have enough to offer her. I took up pirating as a way to make the money. When I came home, she wasn’t there, so I went out to sea again. I liked the company of the waves better than that woman anyhow.

9.       Have you done the Totally Bound Jolly Rogered Quiz yet? What was your score?

I did all right. My pirate name according to that generator was Fish Head Darius...I don’t know who created those names, but I think I’ll stick with Killian. My regular name is just fine.  Do you want to take the quiz? Go for it. You can find it here: https://www.surveymonkey.com/s/YWVMRQC

If you want to test your knowledge of pirates and enter our prize draw to possibly win all four stories from the Jolly Rogered collection, then do the quiz. :-)


And don’t forget to visit the other Jolly Rogered authors and get to know the rest of the swashbuckling heroes from the collection.
Temptation Released, Ayla Ruse
The Running Game, Meg Harding
Right of Salvage by Ashe Barker


Want to know a little  more about my story? Here's a snippet from Ruined by the Pirate.


Ruined by the Pirate by Wendi Zwaduk 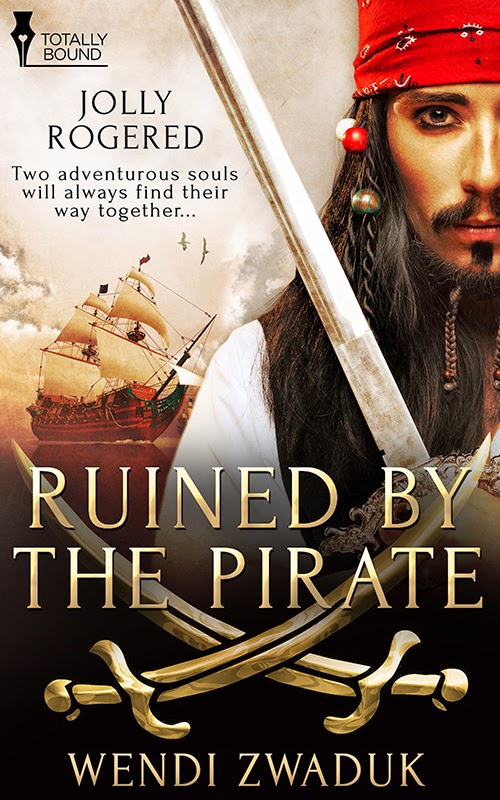 Two adventurous souls will always find their way together.
Pirates aren’t in vogue in 1910, but that’s not stopping Captain Killian Thomas. His exploits have been splashed all over the newspapers for more than ten years. He takes what he wants, no questions asked. He’s happy with life on the water—until he sees her.
Sarah Moyer, heir to the Moyer real estate fortune is a rare jewel among the upper crust. Her independent ways are notorious. She’s driven a car, traveled to England on her own and flatly refuses to marry the man her father’s picked out for her. The chance encounter with Captain Thomas changes her perspectives. Will she follow the ways of a proper lady or will she allow herself to be ruined by the pirate?
Reader alert: Contains the ruining of a virgin as well as scenes of oral sex, sex on the bed and sex in a cabin. This pirate knows who he wants and he’s not afraid to take her to the orgasmic heights she deserves.
https://www.totallybound.com/ruined-by-the-pirate
https://www.allromanceebooks.com/product-ruinedbythepirate-1566601-162.html

EXCERPT:
Copyright © Wendi Zwaduk 2014. All Rights Reserved, Total-E-Ntwined Limited, T/A Totally Bound Publishing.
“What exactly do you think you’re doing?” she demanded.
The figure turned around and she gasped. The man from the dock. He grinned and shrugged. “I believe this is called stealing, love.” He grasped her jewelry box from the mantle and tucked it into his large coat.
“Not my things you won’t.” She surged toward him and swung. Instead of connecting with his face, like she’d planned, she bounced her fist off his shoulder. Drat. Her defensive move hadn’t stopped him. Instead, he laughed, which infuriated her more. “Put those down and leave my room. Who do you think you are? You’re not entitled to my things.”
“Darling, I don’t want your jewelry.” He placed the box back on the mantle. “I came here for something else. You.”

Killian Thomas watched the minx squirm. He’d knocked her for a loop by admitting the truth. Her dark eyebrows knotted as she glared at him.
“Why would you be here for me?” She gripped the front of her coat. “I’m not anyone important.”
“I suppose you’re going to tell me I’m wasting my time.” He stalked toward her, capturing her in his arms and pinning her between his body and the wall. “Sarah, love, I’m a pirate and I’ve come to collect my booty.”
“Me?” she squeaked.
“There aren’t any other eligible, beautiful women on board.” He shouldn’t have let that slip—never tell the person you’re kidnapping that you’re attracted to them. He turned her around in his arms and clamped one hand over her mouth. “I bet your father would pay a hefty price to get you back, wouldn’t he?”
She nodded and dug her teeth into his finger. Ah, the minx wanted to play dirty. He hauled her tight to his body, pressing his growing erection into her backside. “This isn’t the time for games. You and I are going to go outside where my ship is waiting. My men have overtaken the crew of this ship. If you scream, I’ll whip your ass. Understand me?”
She froze again, but allowed him to move her forward. He hated to threaten her with something he’d never do—intentionally hurt a woman—but desperate times called for desperate measures. Killian slipped one arm around her waist, keeping her close.
“Say anything and I’ll lock you in my quarters.” Killian moved his hand, but kept her firmly in his grasp. He nodded to Andrews, his first mate. “We’ve got our cargo. Let’s move.”
Gunfire rang out around him as he muscled Sarah onto his small boat. She wobbled a couple of times on the narrow gangplank between the ships, but unlike most of his crew, she managed. She fought him, sending the smaller boat teetering.
“Hold still or I’ll use manacles on you,” Killian snapped. He turned his attention to his cohort. “Go.”
Andrews furiously rowed the life boat away from the massive yacht. He cackled a few times as they pulled away.  Thankfully, Sarah stopped thrashing.
“You can’t take her,” one of the men screamed from the luxury ship. “Pirates!”
“What will you do about it?” Killian volleyed back. “You’ll storm my ship? Not a chance. Andrews, full speed ahead.” He thrust Sarah to the floor until they were out of range of the bullets. Once they reached his stolen yacht, he snatched her from the soggy planks of the smaller boat. He didn’t give her time to think as he dragged her to the backside of the ship. From the moment he spotted her on the docks a month before, he knew he needed Sarah. She made his heart sing in ways he thought impossible.
“These are my quarters.” He opened the door to his private rooms. “Wait here.”
“But I didn’t say anything,” she protested. Some of the pins had fallen from her hair and two dark chocolate colored tendrils slipped over her shoulders. To other men, she might have looked disheveled. In his eyes, she embodied beauty, strength and fire.
“Very true, but your crew wishes me dead. I’d rather you lived as well.”
“They wouldn’t want me dead if you’d stayed on your boat and left me alone.” She attempted to tuck her hair back into the messy bun.


“Love, I’m wanted in many places for many things. None of those heists mattered compared to having you.”


Check out our Facebook party to celebrate the release of the collection, right here: https://www.facebook.com/events/1435843353343133/?fref=ts
The party starts on July 15th!
Posted by Wendi Zwaduk and Megan Slayer at 12:00 AM

What a sexy pirate!