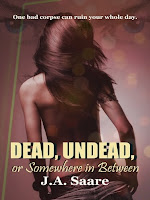 Tomorrow JA Saare stops by the blog with her new release Dead, Undead, or Something in Between.

One bad corpse can ruin your whole day. No one knows that better than Rhiannon Murphy.

She’s left behind the flash and sass of Miami for the no-nonsense groove of New York City, eager for a clean slate and a fresh start. A bartender by trade, a loud mouth by choice, and a necromancer by chance; she’s managed to keep her nifty talent hidden from those around her – until now.

The deliciously good-looking vampire Disco knows her secret, and when he strolls into her bar to solicit help investigating the mysterious disappearances of his kind from the city, she discovers he’s not the kind of person that appreciates the significance of the word no.

But in a world where vampires peddle their blood as the latest and greatest drug of choice, it’s only a matter of time before the next big thing hits the market. Someone or something is killing vampires to steal their hearts, and unlike Rhiannon, this isn’t their first stroll around the undead block.

My shoulders drooped in defeat. Of all the shitty luck.
The only way my life could get worse is if I got my throat ripped out. Coincidentally, I was due to leave my place of employment and enter into a darkened alley to meet up with a vampire. So the odds weren’t stacked in my favor. Not at all.
My boots squeaked on the linoleum as I strode past the coat rack, walked down the hall, and entered the narrow concrete hallway. The big steel door at the end distorted, appearing too close and then too far, invoking images of The Shining. I finally reached it and limply grasped the knob.
I stood there, fingers loose and flaccid. Once I turned the knob, I was sealing my fate. My pride wouldn’t stand for beating on the door and screaming like a pansy to be allowed back inside. I exerted my backbone, grasped the knob, and twisted. The door opened with a protest of metal against metal.
I scanned the area quickly and then sagged in relief. The alley was empty. Thank you God, hallelujah! The door slammed shut behind me as I rushed down the narrow street. I was dodging a bullet, and I knew it.
The moon wasn’t out but the streetlights lit the way decently enough, the circular swells of white shining bright against the darkened concrete. The air was slightly chilly, sending prickles along my skin. I’d have to break out the jeans and sweaters soon.
I hooked a right, keeping my ecstatic pace, until I glanced up.
Disco was propped casually against the wall, his broad back braced against the red bricks. He was standing beneath a nearby street light that shone off his hair, the pale honey blond intense. Pulling out a cigarette and lighting up, he waited as I approached. I watched the red tip brighten as he took a long puff, lifted his head, and exhaled slowly into the darkened night.
So much for dodging a bullet.
Some girls get to be prom queen, others get a perfect SAT score, but not me. I was the biggest winner on The Price Is Right, and Johnny just told me to come on down.
Posted by Wendi Zwaduk and Megan Slayer at 4:09 AM

Welcome Jaime! Great to see you again. Love the post and the novella. Good stuff.

I can't wait, Wendi!! It's always so much fun to hang out on the blog and talk shop!