This post is part of a virtual book tour organized by Goddess Fish Promotions. Shannon O'Gorman will be awarding a $40 Amazon or B/N GC to a randomly drawn winner via rafflecopter during the tour. Click on the tour banner to see the other stops on the tour.

Rose Hawthorne: The Irish Wanders follows Rose, a celebrity author in her early seventies, who dislikes the limelight but does like Hermes scarfs, round violet sunglasses, and old colonial hotels. One day, she receives a letter asking her to visit Newgrange, Ireland and discover something that has been hidden there for a thousand years.

She asks her granddaughter Samantha to accompany her, but she hadn’t expected her to continually post photos of their progress on her Instagram account. An encounter with an old love and an unexpected discovery leads Rose deeper into the past, where she finds she must make a hard decision about her future.

At first, the music the fiddler played was lively, his fingers deftly danced across the strings, and a few couples got up to spin around the floor. Towards the end of his set, he played exquisite notes that washed over the pub, making the dust dance, and it rose in the air like magic. The cheering and conversation quieted down for his last song. It was a slow piece that most of them recognised. The fiddler hit the final note with such poignancy that it echoed throughout the pub. When the music stopped, the whole pub went quiet.They cleared their throats and blinked back tears, and then took a few last swallows from their pints.

“Nothing like a bit of Irish music to bring out the tears,” Bill admitted wiping an eye.

“It's something so special,” Rose agreed with a small sniff.

And all around the pub, they raised their glasses to the fiddler and his music.

As people began to leave the pub, Rose realized that it was getting late and neither of them had eaten yet.

“Shall we eat something? Maybe grab some fish and chips?” Bill said, reading her mind.

“Perfect,” she replied in a low, quiet voice.

They bought some greasy fish and chips at a nearby takeaway. It was wrapped in brown paper and covered with the Dublin news.

Then, they walked the streets until they found a bench under the stars away from the shouts, laughter and the lights. Beside the river, they were alone. They unwrapped the greasy paper and ate the cod hungrily, stuffing the vinegar smeared fries quickly into their mouths.

“Do you want the last chip?” Bill had said softly, holding it up in his greasy fingers. 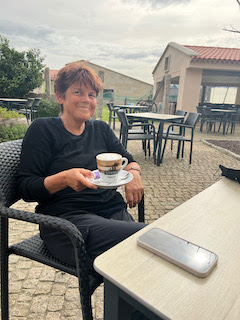 Shannon O’Gorman is a retired ESL teacher who has recently completed her second walk on the Camino de Santiago. She is currently training her dog to accompany her on a Camino one day. She lives in California with her husband and daughter when university is not in session.