This post is part of a virtual book tour organized by Goddess Fish Promotions. Elizabeth Cooke will be awarding a $25 Amazon or B/N GC to a randomly drawn winner via rafflecopter during the tour. Click on the tour banner to see the other stops on the tour. 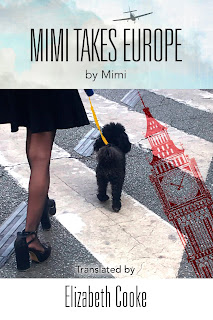 In this latest cozy mystery, Mimi, and her co-anchor, Nicole Marcel, on the Interview TV Show, TONIGHT, is at her peak of popularity in Paris. Charles Bleisante, who owns the TV Station, proposes a TV interview tour for the pair of certain cities on the continent.

The two, with Nicole’s lover, Detective Giscard Morency, are off, first to Barcelona, later to London. The interviews center on food: the cooking of a paella, in Spain; the braising of a Christmas goose in London, delicious episodes that attract a wide audience. However, certain nefarious incidents occur, in which Mimi is canine sleuth.

CNN–New York requests the co-anchors come to Manhattan for more interviews. There, Mimi helps solve a grisly murder that takes place in one of the highest billionaire luxury buildings in the world.

The resolution of this crime is revealed in Book Five of The Mimi Series: “MIMI TAKES MANHATTAN.”

Detective Giscard Morency grew concerned. As lover of Nicole Marcel, he began to have a dull sense of dread toward one Charles Bleisante. He realized the extent of the entrepreneur’s interest in Nicole. It was not only professional. Oh no. It was much more personal.

Giscard knew the man had lustful feelings for his woman. He could understand it well, but it surely made him deeply anxious about the proposed TV Tour of Europe that Bleisante was proposing for Nicole.

The two – with Mimi – would be out of Paris – in grand hotels – at dinners – on planes shooting through the skies – in exotic places - in bedrooms?

Giscard determined to interrupt this pilgrimage. He would find a way. Perhaps, on the journey, Mimi with her petit nez noir, (little black nose,) would find a new felon for him to track. Obviously, Mimi and Giscard were linked together on several nefarious cases. It would not be at all untenable for the detective to enter the picture if a proper case should appear. It was not much to hope for, but hope he did!

“I’m not going to let you go off with him... alone,” he declared to Nicole.

“Well, I know him too,” was Giscard’s strong rebuttal. “I know men...it’s in his eyes. He lusts for you.” Giscard made up his mind there and then to go wherever she went, whether Nicole approved of it or not!