Book Blast ~ Without a Head - A Dying to Be Beautiful Mystery by M. Glenda Rosen

This post is part of a virtual book tour organized by Goddess Fish Promotions. M. Glenda Rosen will be awarding a $30 Amazon/BN gift card to a randomly drawn winner via rafflecopter during the tour. Click on the tour banner to see the other stops on the tour. 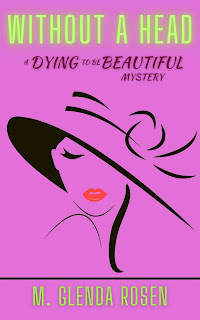 Jenna Preston is used to investigating cheating spouses, fraud, and even a murder or two in her role as a private investigator. But she’s never consulted on a case quite like the one at Darcy’s Salon in East Hampton. A killer has struck and left behind a woman’s head in the upscale salon’s shampoo sink.

As Jenna struggles to make sense of the what’s happened, she comes up against entitled and badly behaved beach dwellers, greedy parties with motives all their own, and the billion dollar beauty industry. With her loyal dog Watson at her side, Jenna pieces together clues and tracks down a killer who claims victims that are dying to be beautiful.

This was not the first time the salon would find itself in the news. Almost ten years ago, another summer, a different disaster. Jenna remembered it well. She had been an investigative reporter at the time for the local daily paper. With its senior editor, she had worked the story for weeks.

“Fifty-four year old Zachary Kline, hair stylist at Darcy’s Salon in The Hamptons, was arrested after police found dozens of photos of underage children at his home and on his computers. He is alleged to have made arrangements for many of them to have sex with older men, several accused of indecency with minors. His checking account showed huge deposits from an undisclosed source. A serious criminal offense, he is facing felony charges that could get him a long jail sentence.

“The salon’s owner, Darcy Monroe, had no comment. The local police have said it’s an active investigation and can’t provide any more details at this time. It is known that one of the children, a young boy, told his parent what happened, which is what put this investigation into motion.”

“We did a number of in-depth stories including background pieces on the subject of child endangerment. Plus I interviewed Kline, but he refused to say who his clients were, which is why he ultimately got a ten-year sentence after being found guilty. Only thing that saved him from more years were a few locals saying positive things about him. The story of the case went on for several weeks. All of us reporters were nagging you for comments or information you might have on this Kline guy.”

“My attorney told me to keep saying, ‘No comment.’ Eventually, it all died down in the media, but it cost me a summer of headaches and maybe a dozen customers leaving my shop.”

“Jenna, I need your help. The body has to be found before the salon has another full-blown disaster hanging over its business in the middle of ‘the season’.” 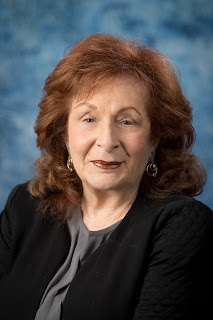 Marcia Rosen (aka M. Glenda Rosen) is author of ten books including The Senior Sleuths and Dying To Be Beautiful Mystery Series and The Gourmet Gangster, Mysteries and Menus (with her son Jory Rosen). She is also author of The Woman’s Business Therapist and award-winning My Memoir Workbook. Marcia was owner of a successful national marketing and public relations agency, received numerous awards for her work on behalf of business and professional women and has given many presentations, now as Zoom Events, such as: Encouraging the Writer Within You, Writing A Mystery...Not A Mystery, Book Marketing with Zoom and Podcasts, Writing From Your Soul, Memoir Writing and The Senior Sleuths & Dying To Be Beautiful Mysteries. Member of Sisters In Crime, Southwest Writers, Central Coast Writers and Public Safety Writers Association. Board Member, 2021, National Association of Independent Writers and Editors.

Sample of Scheduled Zoom Programs: The National Steinbeck Center (6 week program on About Being an Author), Shelter Island Library, an hour marketing presentation. Public Safety Writer's Association Encouraging the Writer Within You, Central Coast Writers “About Being an Author,” Podcast Marketing for Southwest Writers, Murder on The Beach bookstore, Memoir Writing Sessions, Shelter Island and Westhampton Beach Library, “Writing Mysteries…Not A Mystery,” and other venues and topics for 2021.

Thanks for featuring me on your blog, M. Rosen