Book Blast ~ Sympathy For the Devil by Alex Stevens

This post is part of a virtual book tour organized by Goddess Fish Promotions. The author will be awarding a $15 Amazon/BN GC to a randomly drawn winner. 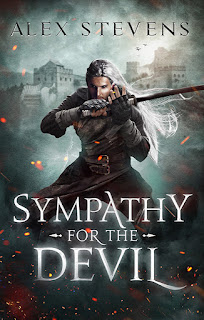 Four warriors on one hell of a mission.

Lieutenant Colonel Tyler Graven is known as the “Demon of Kyoto,” and he specializes in death. When an assassin attempts to kill pharmaceutical mogul Mortimer Sackler, Tyler becomes the lead suspect and the target of a $100 million dollar hit. To save himself and clear his name, he must hunt down the true killer, a deadly entity known only as The Priest.

Tyler teams up with his former military unit, The Four Horseman, including his brother, crack-shot Corporal Jack Graven, the mysterious Lance Corporal Jin Xialong, and his one-time flame Colonel Diana Levitas. Once, they were an elite fighting team known for completing two of the most successful campaigns against terrorism ever launched. Now, they’ll find themselves locked in a war with The Church, the most influential organization on the planet--and pitted against the supernatural forces of the Underworld itself.

During their mission, Tyler and Jack learn of the legendary Black Muramasa, the only weapon that can destroy immortals such as demons, angels, vampires, seraphim, and nephilim. As they uncover the secrets of the ancient black blade--and their own heritage--they are faced with unforetold powers and infinite evils. If the Four Horsemen succeed, they may save themselves. If they fail, it’ll cost them their sanity, their lives, and even their souls...

Here comes an action-packed, gun-slinging fantasy adventure that packs the punch of a military thriller combined with high-stakes supernatural intrigue.

Jack attacked high, elbows swinging in vicious hooks, while I swung a right roundhouse at the front of the priest’s right knee. The Priest deflected my first kick with his shin, but my second snapped out without hesitation toward his head. He brought his daggered hand up to block, which would have surely cut my leg to ribbons had I not pulled my kick. Simultaneously he swung his left dagger in a backhand at Jack’s face. Jack threw his body in a backward somersault, catching The Priest under the chin with a solid kick that sent him stumbling backward. I sought to capitalize by catching him in the right temple with a right heel kick, but The Priest managed to stab his left dagger through my foot.

I hobbled back in agony and collapsed to the floor. He turned his back on me and faced off against Jack. The two eyed each other in slightly crouched stances, their hands eye level before them.

“You chose the wrong side, pup,” The Priest mocked. “I had thought you were smarter than that.”

“If I had known you would kill an innocent woman, I would have killed you in that garage. You can’t even see the irony in your beliefs.”

“How innocent could the wife of that villain be? Did she do anything for all of the innocents that her husband killed?”

“Guilty by association then?”

The Priest surged toward Jack, knives stabbing forward at neck, face, and armpits with merciless and unending precision. I had never seen blades dance the way his did. Every move was perfectly balanced and precision timed, each extension of his limbs perfectly stretched and recoiled. He was a finely tuned machine of death, and every ounce of his hate was drawn toward Jack.

About the Author:Alex Stevens is a Marine Corps Veteran with two deployments and a graduate of the University of Nevada, Las Vegas Interdisciplinary Studies program, a unique undergraduate degree that caters to students with various interests of study. He is also an advent traveler and philosophy enthusiast who has spent a lifetime studying religions, with a focus on Non-denominational Christianity. Alex spends most of his time going for walks, spending time with loved ones, and when the juices are flowing, writing. Fantasy fiction is his great escape from the mundane and he likes to create fantastical realities that are blended with non-fictional people, places, and events.

Thank you so much for posting! Alex is so appreciative of you sharing his book.