This post is part of a virtual book tour organized by Goddess Fish Promotions. Kristina M. Sanchez will be awarding a $20 Amazon or B/N GC to a randomly drawn winner via rafflecopter during the tour. Click on the tour banner to see the other stops on the tour. 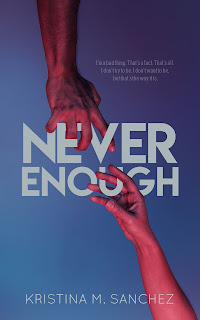 At thirty-seven, Valentin Belmonte returned to his mother’s house with his tail between his legs. No surprise there. His life had been a long line of bad choices, failures, and trouble. Also returning home, freshly graduated and on the hunt for a job, was Mina Toussaint, the orphan Val’s mother and stepfather had taken in when he was already grown. She’d been the only person who’d ever really liked him, but he’d screwed that up a long time ago.

Mina’s adoptive family had treated her like the perfect princess and little girl they always wanted. Val was the only one who’d ever seen her for who she really was; she’d never wanted to be a princess. But after what happened when she was sixteen, she thought she hated him. Now, six years later, things were different. She wasn’t the child she’d been when she got so angry. The trouble was that Val hadn’t changed. He still saw her.

Frankly, he saw too much.

Mina was coming in the opposite door from the garage, fast-food bags in hand. He stopped. She stopped. They stared at each other.

She’d been sixteen the last time they were face to face, her furious and him trying to explain why he had to leave. He’d come home for Christmas once, three years ago, but she’d made an excuse to go home with one of her friends for the holiday break instead.

Running into her wasn’t what stunned him, though. That was expected. What wasn’t expected was, well…

She was stunning. Smoking hot. She was all hourglass curves; plump, perfect breasts; and straight brown hair sticking out from under a beanie. She had her glasses on for once, and that did things to him. His body, his blood, sparked with an awareness that was familiar—he was a red-blooded man, after all—and yet foreign.

About the Author Kristina M. Sanchez began her life-long love of writing as a small, insomniac child, making up stories about Bugs Bunny to occupy herself when everyone in the house was asleep. She lives now in Southern California with two cats and an enchanting hurricane—err—toddler. An enchanting, smarty-pants, bewildering toddler. Kristina is an asexual, happily single mother by choice. You might think that’s a weird kind of person to be writing romance novels, but the best science-fiction writers have never been to space, so there you go.