To Be His by CR Moss!

Thank you for having me on your blog! I’m happy to share with you and your readers my latest release. First is some information about the series and the book…

About the Series
Nestled within the hills of central Texas is a special ranch. A place that defies the laws of physics—that of time, space, and dimensions. It’s a place where normal morphs with the paranormal and supernatural. A place that seems to know what a person’s true desires and needs are, and then allows the right circumstances to occur to fulfill those wishes.
Welcome to the Gateway Ranch.
Your gateway to all things possible… 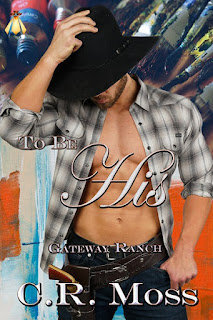 I’m Professor Arianna Perez, and I’ve been asked if I’ll ever trust, let alone love, another man again. After dumping an abusive boyfriend, I doubted I would. At least, that’s how I felt until fate had sexy wrangler, Gavin Bishop, reappearing in my life in a way I never expected.

Against my better judgement, I fell hard for the cowboy, believing everything he said, including how he wanted to treat me like a queen and keep me safe. Little did I know, though, that the circumstances that brought us together could also tear us apart…
And possibly claim my life.


Now a peek into the story… 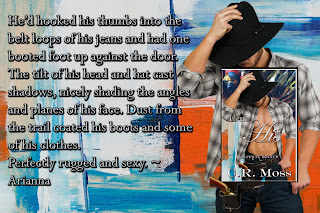 Excerpt for To Be His by C.R. Moss


As Gavin made sure they were secured behind the gates with plenty of water and some hay and feed, I strolled down the center walkway. Two horses had been left behind from the morning’s rides, but they didn’t seem too upset. I cooed at them as I passed by. When I arrived at the end, I peeked down the left row and the right one, taking in all the tack and saddles hanging on the wall and lining the workbenches on either side of a few doorways.
“Ari? You okay?”
“Yes, just being nosy,” I replied and turned to head back over to Gavin, who happened to be leaning up against one of the empty stalls next to the horse, Ebony, I’d ridden. He’d hooked his thumbs into the belt loops of his jeans and had one booted foot up against the door. The tilt of his head and hat cast shadows, nicely shading the angles and planes of his face. Dust from the trail coated his boots and some of his clothes.
Perfectly rugged and sexy.
The artist in me wished I’d brought sketching materials along so I could capture the moment. Or better yet have kept my phone on me. I could have snapped a picture and then painted him later in the privacy of my own space where I could let my fantasies flow free.
A slight movement on his part revealed his eyes. The intense, direct stare of his gaze made me question my decision to roam the building. Unsure of the nearby exits, I glanced away from him and closed my eyes.
I had to fight the panic sprouting within me. Ever since childhood, when my friends and I almost couldn’t escape a theater during an emergency, not knowing escape routes tended to give me anxiety. Chad hadn’t helped either. When his treatment grew rougher, I always tried to make sure I had a way to leave. Not knowing if a doorway leading to the outside was behind me or not made me antsy.
Gavin’s not that lying cheater Chad. Gavin wouldn’t hurt me.
But did I really know that for sure?
Slowly, I turned my head and opened my eyes. An empty stall containing what looked to be fresh hay sitting in a pile in the back corner caught my attention. The ground appeared to have been cleaned.
Fighting the urge to run, I looked back at him.
His gaze had grown passionate, and his lips had curled into a rakish smile.
My heart fluttered. My knees went weak. The atmosphere seemed electrified.
Any hints of anxiety were swept away due to the sensual magnetism pulsating between us, and all my thoughts fled. Save for one.
What would it be like to have a roll in the hay? 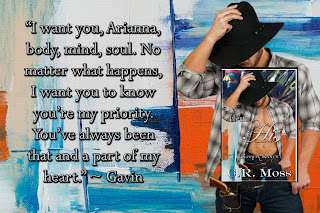 
About the author…
Author Bio
An eccentric and eclectic writer, C.R. Moss pens stories for the mainstream and erotic romance markets, giving readers a choice of sweet, savory or spicy reads, usually within a sub-genre or two — paranormal, sci-fi/fantasy, time travel, or western flare. She also has a passion for penning dark fiction. Writing as Casey Moss, she delves into the darker aspects of life in her work, sometimes basing the stories on reality, sometimes on myth. No matter the path, her stories will take you on a journey from the lighthearted paranormal to dark things unspeakable. What waits around the corner? Come explore…
Author Links
Blog/Website | Twitter | Instagram | Amazon Author Page | More Gateway Ranch