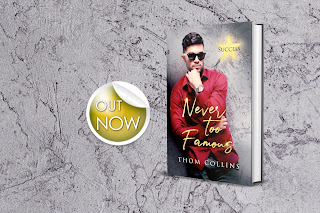 Never Too Famous by Thom Collins 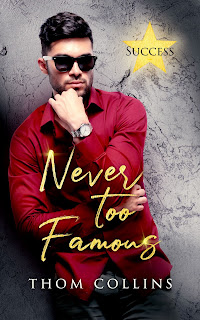 They’ll do anything for fame, whatever the cost.

Harry Alexander and Grant Hunter are big names in reality TV, but they couldn’t be more different. For Harry, fame happened by chance. He was working as a marine engineer on a cruise ship when the liner became the subject of a fly-on-the-wall documentary series. Harry’s good looks and charming personality made him an immediate hit with viewers, and he became the break-out star of the show.

Grant Hunter took no chances in his pursuit of fame. Having starred in the outrageous reality show Sexy Northerners, he grabbed success with both hands and didn’t let go. Grant is prepared to do whatever it takes to stay at the top—red-carpet appearances, parties, high-profile romances and X-rated videos. He’ll do anything in the name of self-promotion to maintain his notorious reputation.

When Harry arrives in Grant’s home city of Manchester, they have preconceived ideas about each other. As they realize they have more in common than they ever thought, they must overcome prejudice, rivalry and the social and professional barriers placed before them, if they’re ever to get together

Series Blurb: Fame, money, power. Some men will do anything for them. In every field, it’s a cut-throat race to the top, littered with deceit, passion and love. For those strong enough to get what they want, maintaining it is never easy.

Reality TV stars, footballers, lawyers, singers and movies stars—join them as they discover what they’re each prepared to pay to preserve their success.


Now for an Excerpt!

The bars along the canal were busy for a Sunday evening. People sat at the outside tables, laughing and drinking. From the corner of his eye, he clocked that someone had recognized him and was moving in his direction. Harry tucked his chin and kept walking. He wanted to reach his room, lock the door and spend some quality time alone.

When a hand touched his shoulder, he expected it to be a fan, eager for a photograph. He turned, hoping to make it quick, and was surprised to recognize the smiling face that greeted him.

My God, he’s handsome. Up close, his chiseled features and warm brown eyes were exquisite. His smile grew wider and his eyes sparkled with amusement.

“I thought it was you,” Grant said, thrusting a hand forward. “Nice to meet you at last.”

“You too,” Harry said, accepting the firm handshake.

“I wanted to say hello last night, but you left the club before I got the chance.”

“Sorry.” Harry shrugged, unable to tear his eyes from Grant’s hypnotic gaze. Dark and moody, like a film star from a different era, a 1950s matinee idol who’d stepped straight off the screen and been transported to modern-day Manchester.

You could cut yourself on his cheekbones, they’re so sharp. And that jawline…

“It wasn’t really your scene, was it?” Grant asked.

“I guess not. But sorry, again, I should have come over before I left. It was rude not to.”

“Why don’t you make it up to me now?” Grant said, gesturing to the bar where they had stopped. “A drink. I’ve got nothing else to do right now. How about you?”

The man was a natural flirt. That was obvious. But he had an undefinable and powerful charisma. Harry’s heart beat faster. Grant had an instant effect on him. “Why not?”

Thom Collins is the author of Closer by Morning, Gods of Vengeance, Silent Voices and the Anthem Trilogy. His love of page turning thrillers began at an early age when his mother caught him reading 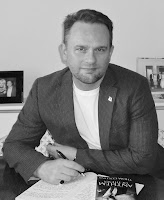 the latest Jackie Collins book and promptly confiscated it, sparking a life-long love of raunchy novels.

He is currently working on a new novel.

Thom has lived in the North East of England his whole life. He grew up in Northumberland and now lives in County Durham with his husband and two cats. He loves all kinds of genre fiction, especially bonk-busters, thrillers, romance and horror. He is also a cookery book addict with far too many titles cluttering his shelves. When not writing he can be found in the kitchen trying out new recipes. 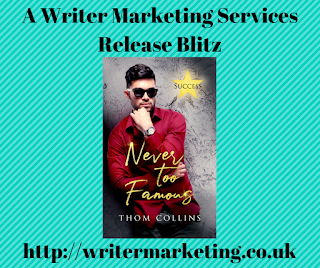