Book Blast ~ The Perils of Autumn by Rusty Blackwood

This post is part of a virtual book tour organized by Goddess Fish Promotions. Rusty Blackwood will be awarding an inscribed and autographed softcover copy of "The Perils of Autumn" to be given to three randomly drawn winners (US/Canada only) via rafflecopter during the tour. Click on the tour banner to see the other stops on the tour. 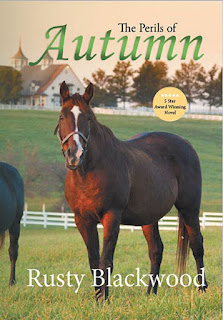 This page-turner, set primarily in the early 1970s, centers on a young Kentucky woman, Autumn Leeves, born in 1946 to Abigail Leeves, an unwed mother who struggles to make ends meet. By 1970, Autumn graduated nursing school and is sent on assignment by the local hospital to care for the terminally-ill wife of middle-aged English equestrian master, Cyril Landon, owner of Landon Lawns Stables, a most successful thoroughbred racing stable located just outside Lexington, Kentucky in a posh community known as The Meadows.

Duff Taylor, a world-renown jockey who is tops in his field, lives full-time above the tack room at Landon Lawns and enjoys the many benefits it brings, but he also has a dark secret surrounding an unsolved racing incident from his past that he will go to any length to protect.

Autumn arrives at Landon Manor in time to be thrown into the drama and finds herself caught in the ongoing disruption that ensues.

The time of year a child is born can often explain the name they are given, and this significant gesture seems to happen more often when the new arrival is female. Seasons can play a huge part, as well as the mother’s frame of mind when she gives birth. There can be many contributing factors behind a name, multiple reasons for choosing a certain one, but regardless of the reason, a name can often determine the course of one’s life.

It was mid-spring of 1946 when twenty-one-year-old, blonde haired, blue-eyed Abigail Leeves found herself an unwed mother and totally on her own. Her fiancé, and father of her unborn child had been killed in a car crash on route to their April wedding, leaving the three-month pregnant bride awaiting his arrival of which would never come. This would have been devastating for anyone, and Abigail, who fought to hold it together was no different, but being the strong-willed person that she was, she held her head high, and carried on. The situation was unfortunate in other ways, because it not only meant a difficult life for a single mother by way of integrating into a community of married couples, it also meant the child born out of wedlock would be looked down upon for the simple reason they had no father. This narrow-minded outlook would thankfully change for later generations, but for those born in Lexington Kentucky before the 1960’s it meant a never-ending search for acceptance, and for auburn-haired, brown-eyed Autumn Rose Leeves, born in early October of 1946, it was the normal way of life.

Abigail Leeves was not only resilient to the negative way she was being treated, she was a proud woman, determined to make a decent life for herself and her baby girl. In early December of 1946, with the Christmas season fast approaching, Abigail managed to find employment in the millinery department of Perkins Dry Goods, a popular ladies shop located on the busy corner of Main Street and Elm Tree Line in downtown Lexington. The engaging shop was owned and operated by seventy-eight-year-old Lucy Perkins, a kindly widow who adored children but had never been blessed with any of her own. She immediately took a shine to baby Autumn and fixed an area in a private room at the back of the shop in which to care for her. This oasis was complete with a small table and two chairs, a crib, and an easy chair, all providing the young mother a cozy area in which to take her breaks and spend time with her infant daughter. The svelte Abigail was extra fortunate, for Lucy Perkins lived directly above the shop in a large, three-bedroom apartment that she offered to share with the young family in return for a nominal fee. It was a wonderful arrangement. Not only did it allow the young mother a safe and comfortable home in which to raise her daughter, the cozy area in the back of the shop provided a protective cocoon for the baby during working hours. Lucy Perkins doted on baby Autumn, never once complaining when she cried or became fussy. She would help as diligently as she could, which in turn brought abundant gratitude from the child’s young mother.

The entire setup impressed Abigail immensely for when Autumn was born, she had no-one in which to turn. Her parents were gone, and she was an only child. These thoughts thrust her back to when she had spent countless hours holding Autumn in her arms while searching for a job, only to find door after door slammed in her face. It became a daily occurrence; one that left her no alternative but to go on city relief, that of which paid for a small, dingy room in a boarding house with minimal compensation left-over for food. This treatment continued until she came to Lucy’s shop, where she expected the same rebuttal, but was appeased to find instant asylum in Lucy’s opened arms as she smiled, and welcomed them in. 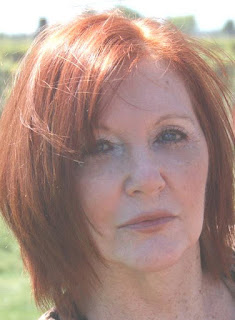 Top ranking romantic fiction author Rusty Blackwood, who chose her plume de nom by combining the colour of her russet hair with her husband's great, great, Scottish grandmother's maiden name, was born in St.Thomas, Ontario, Canada on October 5th, and grew up on her paternal grandfather's farm in the County of Elgin, located in the south-western portion of the province of Ontario.

She acquired her love of literature while still in elementary school where she entered her original compositions into county fairs, school contests, and whatever venue allowed participants in the writing field. She has carried that love ever since and has put it to use many times since becoming a professional writer in 2001.

From the time of youth she has loved the Arts in their many unique forms, she is a graduate with honors in Interior Decorating & Design. She spent many years on the south-western Ontario stage performing with her family's country music band: The Midnight Ramblers, followed by the country - rock - blues band: 'MIRAGE' as an accomplished vocalist, bassist, and rhythm guitarist. She now resides in the cultural city of St. Catharines, Ontario.

The Perils of Autumn is a 2019 International Book Awards Finalist in Romance along with being a 5 star winning novel.

Also, there’s an Ebook sale at the same time of "The Perils of Autumn" Tour for her romance title "Willow's Walk" for $1.99

Good morning Wendi! I would very much like to thank you for hosting me & Autumn on our very last day of this amazing Blog Tour! I will be stopping by periodically throughout the day to reply any comments your followers may have. And I hope your followers submit their name into the contest! My best wishes to all, and have a great day!