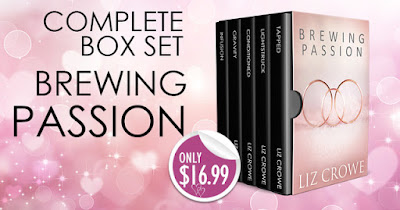 A unique new romance series set in the trending world of the craft brewery. Meet the owners, employees and friends of Fitzgerald Brewing as they live, love, lust and laugh their way through the ups, downs and sideways shifts of small business ownership.

Publisher's Note: Also linked to this series is Adjunct Lovers which revisits Ross and Elle from Lightstruck.

One hot entrepreneur plus a driven saleswoman and sultry brewer—simmered in the craft beer world for a unique, sexy reading experience!

For Austin, it’s a life-altering moment that sets him on a path away from his birthright, while Evelyn must face her fears about committing to a man considered the playboy of the micro-brewing world.

But three strong personalities don’t always make for the best emotional mix and when a simple misunderstanding causes chaos, it’s up to Ross to somehow repair the tattered shreds of their relationship.

Brewer Ross has given up on love…until he meets a woman who turns his life—and brewery—upside down.

When he agrees to assist Austin through a spate of brewery mishaps, he lays eyes on his true fate—in the form of the petite, mysterious and exotic Elisa Nagel. Hired as assistant brewer, Elisa is absolutely everything he believes he doesn’t want in a woman. But he’s drawn to her in ways he can’t explain, and he can’t help but fall hard, fast and deep, which places him square in the middle of her horrific, until now secret backstory.

Ross is determined that his love will conquer and overcome the horrors of Elisa’s past, allowing her to trust him with the only thing he desires—her heart.

A chance meeting. An improbable connection. An exquisite attraction.

Trent Hettinger’s turbulent formative years transformed him into a cynic—and into a man who realized he required something outside himself to control his temper. Something he found as a Dom—at least for a while. But he allowed himself to trust a woman once and was slapped back into reality with a vengeance and now devotes all his energy into building his real estate empire, raising his teenaged daughter…and avoiding anything resembling authentic attachments.

Melody Rodriguez kept her head down for years—working hard, making her own money, trying to get ahead with every deck stacked against her. She’s determined to move beyond the ugliness that haunts her without anyone’s help. When a mutual friend sets her up with Trent, she’s determined to have some fun with him and move on.

A man with nothing left to lose. A woman hiding behind her past. When two lives spent in emotional denial collide, it’s a perfect match—at least on the surface. But neither Trent or Melody are prepared for the full force of their true feelings, once fate intervenes and blows a cold breeze into their white-hot relationship.

Out of the ashes of ruined lives they finally find love.

When Brock Fitzgerald is welcomed back into his family thanks to the sympathy of his sister-in-law Evelyn and the tolerance of his twin brother Austin, he understands that this may be the best he’ll ever get for himself. Years spent partying, drinking and screwing his way through life have left him drained, exhausted and accepting of his many weaknesses. He’s grateful for the second chance he’s been offered, even as he continues to battle his demons, including one that leads him back into co-dependency with his oldest girlfriend.

Kayla Hettinger never imagined that once she declared herself clean after several near-overdoses of opiates she’d find herself tending bar for her brother’s fiancée Melody, and enjoying what life she’d managed to build. When she strikes up a friendship with Brock over shared experiences and ginger ale, she discovers something needier and more frightening inside herself—and in Brock—than either of them feels equipped to handle.

Breaking through the clutter of addiction and despair only to find your soulmate waiting on the other side seems like the stuff of fairy tales—until Brock and Kayla accept that being dependent on one another is the only way they’ll survive.

Gayle Connolly’s dream life on the West Coast is snatched from her in the blink of an eye, forcing her to face her own worst fear—because she didn’t truly appreciate what she had, a senseless tragedy was somehow her fault. Now, she wakes up every single morning in her childhood bedroom in Michigan and wonders how she can even breathe, much less live a life devoid of everyone she loved.

Noah Stokes’ dream of taking over his family’s landscaping business is dashed when the company goes bankrupt, thanks to his father’s gambling debts. That hard reality sends him spiraling downward, where he discovers himself making money in ways he’s ashamed to admit. When he leaves it all behind and returns home to Michigan, he’s determined to regain some semblance of normalcy, not to mention his dignity.

For a while, Gayle and Noah’s smoking hot connection provides them both with distraction and solace. Until lust turns into something more—something they both resist for as long as they possibly can.


Reader advisory: These books includes the mention of miscarriages and references the death of a child in the backstory. There are references to suicide/suicidal ideation as well as mentions of self harm and addiction. There are scenes of attempted rape and violence as well as recollections of gang rape, and mention of incestual rape, spousal rape and abuse. There are also references to child sexual abuse.

Amazon best-selling author, mom of three, Realtor, beer blogger, brewery marketing expert, and soccer fan, Liz Crowe is a Kentucky native and graduate of the University of Louisville currently living in Ann Arbor. She has decades of experience in sales and fund raising, plus an eight-year stint as a three-continent, ex-pat trailing spouse to call upon for inspiration.

With stories set in the not-so-common worlds of breweries, on the soccer pitch, in successful real estate offices and at times in exotic locales like Istanbul, Turkey, her books are unique and told with a fresh voice. The Liz Crowe backlist has something for any reader seeking complex storylines with humor and complete casts of characters that will delight, frustrate and linger in the imagination long after the book is finished. Liz books bring something unique, both in settings and characters, that will hook readers of romance, women’s fiction and chick lit alike.

“If you want a story that will grip your heart and bring all your emotions into play, then do not miss a Liz Crowe story.”

"Liz Crowe is my drug of choice for unconventional romance that pushes the envelope of my comfort zone."

Liz Crowe writes intense true-to-life stories that make you feel. Whether it's anxiety, love, fear, hate, bliss, or loss woven into her plot lines, you will feel it deep down to your very soul.

“I’ve learned to expect the unexpected with any Liz Crowe novel—along with 3-dimensional characters and well-written, realistic plots.”