Took You For Granted by LM Spangler #contemporary #secondchance #romance 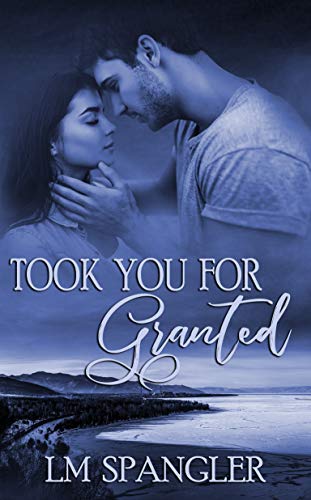 April Donovan thought she’d gotten over Grant Carmichael. He broke her heart, took her feelings for granted, and chose a baseball career over her. She moved on with her life and eventually healed. Seven years later, a chance meeting throws that theory asunder, and several passionate moments rekindle the fire.

And in about five minutes, he would be strolling back into her life. Not on a permanent basis, but she would see him again, and a flood of emotions would swallow her in their depths. She’d want him, both with her mind and her heart. She would fight, and she would lose the battle.

As a settlement agent, her job was to close real estate transactions. Grant was a real estate broker
who, along with his brothers, purchased houses, renovated them, and then flipped them for a profit.
He had been quite successful and often used her. “April Donovan, it is you. I had wondered if
AD stood for you.”

She motioned toward a visitor’s chair opposite her. “Mr. Carmichael. Please sit down.” No, don’t sit. He stood astute and gorgeous in a charcoal, three-piece suit, with a soft gray dress shirt and
burgundy tie. The slim fit complemented his physique. The Grant she remembered had worn
jeans and T-shirts. This version was one hundred percent eye candy.

His head tilted to the side, and his lips formed a thin line. “We have a past. No need for formalities.”

April prayed her pulse wasn’t visibly pounding in her neck. Her eyes bored into his. Damn, he’s
still gorgeous. His black hair was trimmed close to his head on the sides and longer and more disheveled on top, suiting his angular face. His jaw was still strong and could probably still take a
punch. She had seen it happen before. Her gaze fell to his lips—lips that could make her tremble as they moved over her skin. Heat flooded her core, and she clenched her thighs together.

She cleared her throat. “That is correct, Mr. Carmichael. We did have a past, but we have nothing now.”

His brows rose, and a slow, sexy grin turned his lips upward. “Okay. We can play it your way.” He
lowered his six-foot, two-inch frame into the vacant seat. “For now.”

LM Spangler lives in South Central Pennsylvania with her husband, daughter, three dogs, a cat, a rabbit, and some fish. Her son serves his country in the US Navy.

She is a fan of college football and any kind of baseball and likes to watch the Discovery, Velocity, HGTV, DIY, Science, and any channel showing a college football game. She also watches old game shows like $25,000 Pyramid and Match Game.