It's a tour and you'll want to hang around. Why? This book looks awesome, first of all and second, there are prizes to be won. Like? Rachel Dacus will be awarding a $20 Amazon or Barnes and Noble GC to a randomly drawn winner via rafflecopter during the tour. How cool is that? Plus, there is a guest post within this post. Keep reading and good luck!


The Renaissance Club by Rachel Dacus

Would you give up everything, even the time in which you live, to be with your soul mate? That's 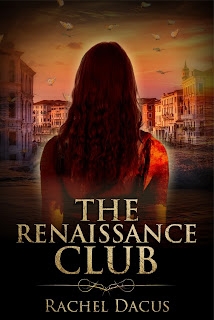 what young art historian and teacher May Gold must decide when she slips through time's folds to meet the man of her dreams and the subject of her master's thesis -- fiery 17th century genius artist Gianlorenzo Bernini.

In her fantasies May is in his arms, the wildly adored partner of the man who steered Renaissance art into the Baroque. In reality, she has just landed in Rome with her stodgy boyfriend and teaching colleagues for a tour of Italy. She yearns to unleash her passion and creative spirit.

When the floor under the gilded dome of St Peter's basilica rocks under her feet, she finds herself in the year 1624, staring straight into Bernini's eyes. Their immediate and powerful attraction grows every time she meets him during the tour. Passion blossoms, but history says they have no future. Can May thread her way through time, and will she take a perilous risk to begin a magical, exciting new life?

This time travel romance is perfect for lovers of Italy, art, and love stories.

My Inspiration to Write The Renaissance Club

A month-long art history group tour of Italy, capping a year of studying the Italian Renaissance, set me on the path that became this book. I visited Italy’s Renaissance high points, Rome, Siena, Florence, Venice, with a scholar and guide so knowledgeable and charming it seemed he could have met all the artists he was talking about.
I wrote a memoir of that once-in-a-lifetime experience. But a straight narrative didn’t convey the thrill of such stunning and plentiful artistic beauty—the real glory of Italy. I realized that only fiction could do it, so I began to invent my time traveling heroine.

Of course, I was influenced in treatment of time travel by Diana Gabaldon’s Outlander. The idea of a woman going back in time to find the love of her life was popularized by Gabaldon’s books. Before that, time travel was often done by guys with laser guns hurtling back to the time of the dinosaurs or into the Crusades. It was all battles. And before that, H.G. Wells scared us with his time machine that revealed a terrifying future.

It took a couple of years to research and fall in love with Bernini and his Baroque art. I was at the same time captivated by female time travelers – a cell phone toting scientist (Doomsday, Connie Wills) or a literary archaeologist (The Jane Austen Project, Kathleen A. Flynn), and a neurosurgeon discovering the sources of the medieval Plague (The Scribe of Siena, Melodie Winawer). These adventuresome women had more than romances. They dealt with interesting historical people, time paradoxes, and love interests where romance wasn’t the main plot.

The Renaissance Club, features a doorway in time through which the main character, May Gold, steps through to meet in dazzling person the subject of her master’s thesis, 17th century sculptor Gianlorenzo Bernini. The clash of two cultures is part of their love story, but May’s journey, as a contemporary woman with ambition and a career, encompasses more than finding true love. What will she give up for love—that became the focus of my story.

The story was the result of influences, interests, and research, and developed over a couple of years, with the help of several editors and early readers. I discovered so much in my explorations through history that I’ve decided to write a prequel and a sequel. Look for more from the characters in the not-too-distant future!

May said gently, “But you have your work at St. Peter’s.”

Bernini nodded and sipped. Enthusiasm suddenly flared in his expression. “I have been asked to improve the church’s façade, and I have a magnificent idea. Twin bell towers. To contribute the grandeur the church has lacked.”

She frowned, knowing those bell towers of his would be erected on unstable ground. He didn’t know, and they had no soil engineers in his time. His first tower would be built, and a crack would appear. The crack would take down Bernini’s career as Architect of St. Peter’s.

At this moment, he was deciding, and his enemies were circling. His pope would die and a new pope would be elected, one who disliked Bernini’s extravagance. The opposition would break over him in a tidal wave.

“You know, working on St. Peter’s isn’t everything,” she said. “After your work there you’ll create your greatest sculptures.”

“But why should I not continue in my sacred role?”

She knew the failure would nearly kill him. His highly emotional nature and ambition would combine in a life-threatening explosion of despair.

He looked down. He gulped the rest of the wine, looking slightly worried, as if her lack of enthusiasm troubled him. But then he smiled.

“You will see my next great triumph!” he declared, the Bernini bravado taking charge of him.

“You must follow your inspiration, of course.”
She smiled at him, thinking that there must be some way to change the course of his future. At the same time, she was thinking how absurd that thought was. 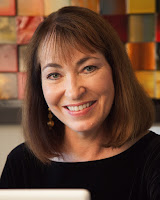 Rachel Dacus is a poet, essayist, and novelist who writes about love and relationships, with a touch of the supernatural. Love and history are the themes of her debut novel, The Renaissance Club, a tale of romance between a young art historian and her hero, the fiery 17th century Italian sculptor Gianlorenzo Bernini. Praise for her novel — “enchanting, rich, and romantic” — describes the kinds of love and adventure stories Rachel enjoys, preferably set in exotic places. She has traveled to Italy and India and plans to expand her journeys beyond countries that start with the letter “I”.

She’s the daughter of a bipolar rocket engineer who worked on missiles during the race-to-space 1950’s. He was also an accomplished painter.

Her interest in Italy was ignited by a course in Renaissance art history that culminated in tour of northern Italy. She’s been hooked on Italy ever since. Her essay on Italy, motherhood, and infertility was anthologized in Italy, a Love Story: Women Write About the Italian Experience.

Dacus shows off her versatility in four poetry collections. Her newest is Arabesque. Three other collections are: Gods of Water and Air, Femme au Chapeau, and Earth Lessons. She raises funds for arts, human service, and healthcare organizations and takes walks with her way-too-smart Silky Terrier.

Find out more about Rachel Dacus and The Renaissance Club:

I am enjoying these tours and finding all the terrific books my family is enjoying reading. Thanks for bringing them to us and keep up the good work.